Trending Stories from The Marquee
You are at:Home»Cover Story»Aimee Mann steps into the ring to fight the good fight and teams up with etown
By Marquee Magazine on August 1, 2006 Cover Story, Features, Interviews 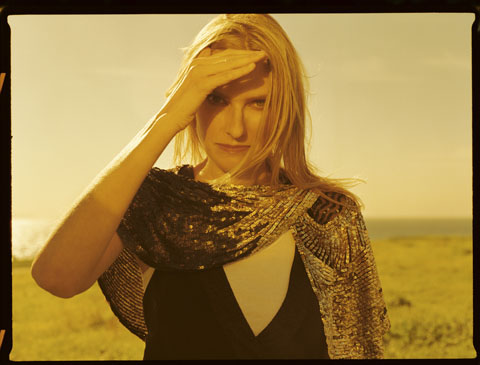 When American bard Aimee Mann took to the stage a while back with a black eye, it can only be imagined what people in the crowd must have been thinking.

The tall but slender singer eventually told the crowd what the real story was, but she learned something along the way. “I realized no one will ask you how you got a black eye when you’re a woman. They just look at you like, ‘Oh, you poor thing. You should leave him,’” she later said.

But Mann hadn’t gotten the bruised face from her husband, it was kind of a self-inflicted wound. Not content with simply slinging a guitar, a little over a year ago Mann stepped into the boxing ring and has begun throwing punches for a hobby — a hobby that grew out of the character development of her latest project.

Mann has long regaled fans with tales of the human condition and the heroes and villains it makes of us all. Last year Mann finally put her talent into epic form and created an entire chronicle called The Forgotten Arm. The album tells the story of John, a drug addicted ex-boxer and Caroline, a white-trash girl facing a dead end. The characters meet, fall in love and road trip across the country. “The Forgotten Arm is much more of a specific story than my usual work,” said Mann in a recent interview with The Marquee.

“The character John, in The Forgotten Arm, is in denial about his drug use and his girlfriend, Caroline is in denial about it too,” said Mann. “In this state they embark on a ‘Let’s get the hell outta here’ road trip. It’s not unusual to have people think they can change their inner circumstances by making an outward change, by running away,” said Mann.

Over the last 20 years, Mann has created pop music for the thinker. “My characters and songs are usually based on people I know,” said Mann. “But most are an amalgamation of character traits of many people.” A long running theme seen not only in The Forgotten Arm, but in much of her previous work, is that of addiction. “I know people who have struggled with addiction problems,” she said. “But everyone has their dysfunctional family story and I think that putting it into the framework of addiction just makes it more universal.”

She said that she didn’t personally grow up around addiction but did grow up with her share of dysfunction. “I think writing about addiction is a way for me to relate to other people,” she said.

During the writing of The Forgotten Arm, while developing John’s character, Mann actually decided to step into the ring herself. “I train with Freddy Roach, he trained Mike Tyson and he trains me just for fun and we’re buddies,” said Mann. “It’s fun that the gym has become the center of my social life. I’ve done a little bit of sparring but not much and not lately.” The sparring came to a halt after she found out how easily she bruised. “I got hit and was worried about my nose until I looked in the mirror and found I had a black eye. And, as you know, I actually played a few shows with that black eye,” said Mann. “It’s really hard to do well. You think boxing looks easy but it’s not. I mostly work on having good form and executing punches.”

Executing punches is something Mann has done well for years, but never before in the literal sense. The artist is a slave to her muse, and it’s something that she can’t force.

In 1999 that inability to force her writing was a good thing, when it naturally produced some of her best-known and highly acclaimed work. Mann was nominated for an Academy Award for her song “Save Me” from the Magnolia soundtrack, to which she contributed eight songs. “I can’t be dictated to, it’s whatever comes out,” said Mann. “Even writing for movies, I sit down and if it’s not happening, it’s not happening.” Luckily, with Magnolia it was happening. Filmmaker Paul Thomas Anderson also chose some of her earlier released songs and actually wrote scenes around her lyrics.

Around that same time, however, Mann’s muse-driven process sparked a fight between her and Geffen Records. “The big labels take their few big acts and then do nothing for their lesser acts,” said Mann. “When Geffen got bought out, the big wigs didn’t even bother to listen to my album but had all kinds of ideas on how I should change it. When they gave me the opportunity to leave I felt lucky to get out.”

Mann now has her own label, Super Ego Records and even though she sells fewer albums, she admitted that she makes more money. “The fame was weird, too. I didn’t want to be that famous. So now, I’m less famous and make more money. It’s really great to have your own label and do the kind of work you want to do,” she said.

Currently, Mann has been working on a Christmas album set for release this winter. “It’s going to be half standards and half not-so-familiar stuff,” said Mann. “I wanted to do an interim project because I wasn’t ready to do a new record yet, but it’s been really good and we’ve been really into it,” she said. “Christmas, to me, is almost magical but still kind of spooky. Like the ‘Peanuts’ cartoon has that spooky edge. I wanted to reflect that and despite how commercial it is, show that it’s still exciting and magical,” said Mann.

Mann will be doing a special performance on this trip to Colorado as she teams up with etown for it’s 15th Anniversary Show at Red Rocks Amphitheatre.

etown, is a locally produced, nationally syndicated radio program that seeks to blend programs of diverse music and conversation in order to entertain, educate and engage a wide audience in appreciating and protecting our cultural and natural resources,

Often recorded at the Boulder Theater, etown usually consists of interviews with the performers, as well as the dedication each week of the “e-chievement” award to a person or organization that is in line with etown’s mission.

But the 15th anniversary show is going to shed some of the standard etown fanfare. Co-host and co-producer Helen Forster told The Marquee that those used to a normal etown taping are going to pleasantly surprised. “There is definitely going to be some flavoring of etown, but this is much more of a concert experience. There are not going to be live interviews on stage and no full-length “e-chievement” award. There will be different people making brief statements between bands, so that people have the chance to connect with etown’s mission, but this is an evening of concerts to celebrate etown,” Forster said.

Forster said that etown’s talent coordinator, Roger Menell, did a brilliant job of finding the right artists to perform for the event. With a lineup that includes Mann, Beth Orton and headliner David Gray, Forster said that the artists are not only capable of filling Red Rocks with their energy, but that they are also individuals who have been on etown and are in line with etown ideals.

etown celebrated its 15th anniversary earlier this year with a special taping at the Paramount Theatre in Denver with James Taylor. Forster said that the Red Rocks anniversary show is an extension of that celebration. “This is a way of expanding etown’s reach and appealing to a wider, more expansive audience. So we’re not saying ‘Hey it’s our anniversary again,’ I think it’s a continuation of the celebration. It’s just a different form of it. We did etown rocks a few years ago and it was so successful that we’ve wanted to come back, and the timing seemed right and the invitation was there, so we decided to do it.”