Trending Stories from The Marquee
You are at:Home»DJ Hippie»Def Leppard releases yeah!, an album of covers, and hits the road with Journey
By Marquee Magazine on August 1, 2006 DJ Hippie, Features, Interviews 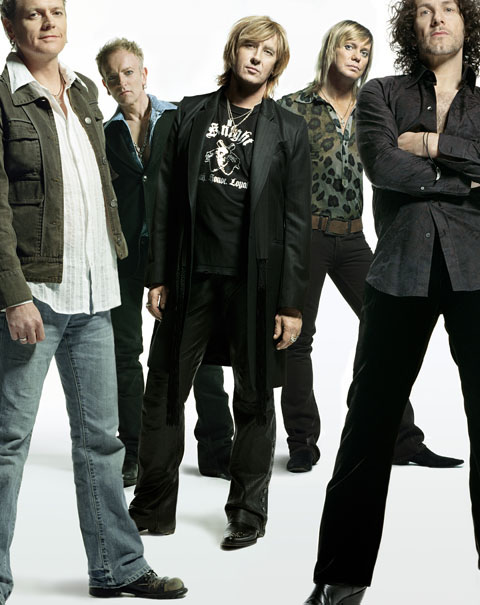 There are few bands can really lay claim to having created music that is eternal. Sure, many bands sing about it. The Bangles sang about “The Eternal Flame” before the pop music gods snuffed the band’s popularity out like a cheap Wal-Mart candle, and Christian metal crusaders Stryper are still singing about the joys of eternity despite a career whose validity died years ago. English rockers Def Leppard are one of the rare exceptions. The band formed in 1977 invaded the world as part of “The New Wave of British Heavy Metal” and they haven’t slowed down since.

While there is no question that Def Leppard has strong elements of metal in their music, the band is really more of a rock band in the tradition of bands like The Faces, David Bowie and even the The Rolling Stones. This is not only reflected in the band’s monumental success but also on their latest album Yeah! (Success sidenote: The band is one of only a handful to earn not one, but two Diamond awards from the Recording Industry Association of America, commemorating sales of over ten million records. Even more staggering of a statistic is that in 1983, their break-out album, Pyromania, topped the charts, making it the first metal album to ever get to number one — and it did this at the time that Michael Jackson’s Thriller was everything and everywhere in the music world. The week it hit number one Pyromania beat out Lionel Richie’s Can’t Slow Down at number two and Thriller at number three.)

Yeah! is an album comprised of covers from bands that influenced Def Leppard’s sound and the band’s long-time guitarist Phil Collen took some time out to discuss the new platter and the band’s stunning career with The Marquee.

Released in May of this year, Yeah! showcases Def Leppard at their best. “We actually decided to record an album of covers years ago, it was really just finding the right time,” said Collen. “After we finished the X Tour we started getting the ideas down and we started recording. We had a specific kind of music that we wanted to capture.”

Whittling down the track list for Yeah! was no easy task, considering that the members of the band are as avid about their music as your most anal-retentive jamband fan. In fact, the band wound up recording so many covers that several special editions of the album have been released at different retailers featuring live and unreleased material, like a cover of Tom Petty’s “American Girl,” from the Yeah! sessions.

“The band was all very much on the same page when it came to what songs introduced us to music. We are all from that same working class background,” said Collen. “David Bowie and Marc Bolan had a profound impact on us all as teenagers, not just musically but just every thing about them. I can remember as teenagers we never got that whole teenage angst thing that so many kids get because we had this music as an outlet.”

Def Leppard have always had a simple vision for the band, to have a good time and to give fans the same. This ethic made the band a particular favorite to people hip to glam rock’s tales of drunken debauchery in the mid-Eighties. While Def Leppard were already amassing a loyal following, the release of Hysteria in 1987 propelled the band to superstar status. Hysteria is one of a select few albums that can boast seven charting singles and is still a staple on rock radio. The album and subsequent tour forever cemented Def Leppard’s place in rock history and made them the top selling band of the Eighties despite not getting as much attention as bands like Guns N’ Roses and Bon Jovi.

Even though Def Leppard have never shied away from their English heritage, the band has always found more success on this side of the pond. As a result, American music has also had a huge effect on Def Leppard’s progression as a band and helps explain the band’s widespread appeal. “American music has influenced us hugely, we actually sing with American accents and we learned a lot of stuff from listening to things like Motown and the like,” said Collen.

While Def Leppard could easily pack shows on their own, the band has never been one to hog the spotlight and after a great co-headlining tour with Bryan Adams last year, the band is about to embark on another double-header that may seem an odd paring to many fans but makes perfect sense to the band. “We are going to go out with Journey this summer,” said Collen. “When Journey was suggested everybody went completely bonkers and the tickets were selling out as soon as they went on sale, so it looks like it was a good idea.”