Trending Stories from The Marquee
You are at:Home»DJ Hippie»James Gang reforms for summer tour from Sturgis to Red Rocks
By Marquee Magazine on August 1, 2006 DJ Hippie, Features, Interviews 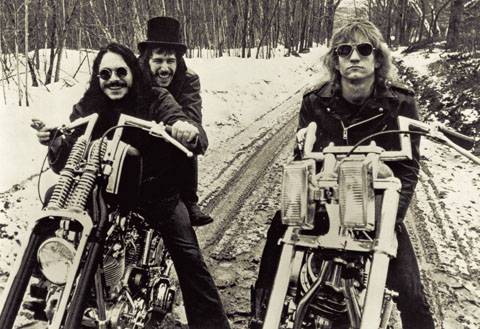 Back in the year of our lord 1966, the public’s eyes were just opening to the weird acid-fueled sounds coming out of San Francisco. But while the Golden State’s most colorful city was the epicenter of a new age in rock and roll, the genre was morphing into other forms all around the country. One such unlikely hotbed for musical growth was the clearly un-mean streets of Cleveland, Ohio.

The city’s native musicians were often steeped in the influence of blues and the growing popularity of Motown soul that was beginning to drift in from nearby Detroit. At the time, a  young drummer named Jimmy Fox was just beginning to put together a band that would ultimately come to be known as The James Gang and serve as the launching pad for virtuoso guitarist Joe Walsh.

Fox, who along with Walsh and bassist Dale Peters round out the band’s most famous incarnation, took a minute to speak with The Marquee about the band’s thirty-plus year history. “The beginnings of The James Gang seems like ancient history now,” said Fox. “I was looking for a band that played hard rock and roll with a strong British influence and lots of guitar, and that was hard to do it the mid-Sixties in Ohio. It was a challenge but eventually it came together and when Joe Walsh joined that band things took off pretty well from there.”

The band’s early years were spent honing their skills on various blues and rock covers, and while the band always planned on writing their own material they let the fates tell them when. “We really didn’t have a grand vision for the band, mostly I just wanted to be surrounded by people who wanted to play and appreciated the kind of music I did,” said Fox. “The scene was just exploding in the Sixties with the emergence of people like Hendrix and Clapton. So in the beginning that was always the kind of music that we hoped to get the opportunity to play, but when you first start out you play what people wanted to hear and that means playing covers. Luckily, in the Sixties people were also open to hearing new things and we were able to start writing our own songs.”

In 1969 a young ABC records staff member named Bill Szymczyk heard the band’s demo and immediately signed them. The James Gang put out their first album, Yer Album, later that year. The album made an impressive run, remaining on the Billboard charts for close to a year.

Yer Album was a stunning exercise in musicianship and the band’s geographical roots were evident throughout the album. “Cleveland was a rhythm and blues town, it wasn’t really a rock and roll town yet. The bands I had played with locally up to that point had aspired to James Brown and Bobby Bland. We came along at a time when there was a new beast in town in the form of the teenage club,” said Fox. “These were places where you could go and you didn’t have to be eighteen and because of that there wasn’t a big alcohol scene and that allowed people to be more open to the music. We were able to reach a lot of people with our first album.”

Of course, any band who has had a hit with their first album knows that making a successful follow -up is a tall order, and after enjoying the success of Yer Album The James Gang began to put together what would become the legendary album The James Gang Rides Again. “There is a saying in the music business, ‘You have your whole life to write your first album but only about six months to write a second one.’ We had worked on new material in dressing rooms the whole time we were on the road and that kept us creative, many of the things that wound up the second album came from that,” said Fox.

James Gang Rides Again featured two of the band’s most enduring songs, “Funk 49” and “The Bomber.” Both songs remain staples of classic rock radio to this day. The album’s success allowed the band to stay on the road and keep creating new music in their downtime. In 1971 the band released Thirds, the band’s last studio effort, an album that featured the hit “Walk Away.”

At the end of 1971 Walsh left to start a solo career, which eventually led into his time with The Eagles. After continuing with The James Gang for several more years — who at one point featured Tommy Bolin on guitar — Fox dissolved the band in 1977. “At a certain point with the band we had run our course. We weren’t making the kind of music that was pleasing me at the end, it had become less fun,” said Fox. “There was no big blowup when the band stopped, we’ve always been in touch and some of the best times were always with Joe in the band. Then when Joe came to us with the opportunity to do three episodes of the “Drew Carey Show” in 1998 (as Drew Carey’s band The Horndogs) that sort of started things in motion again. We hung out in Hollywood and really had a lot of fun and we started performing gigs here and there.”

• Sly and The Family Stone