Trending Stories from The Marquee
You are at:Home»Features»Reincarnated Subdudes step out of New Orleans from behind the levee
By Marquee Magazine on August 1, 2006 Features, Interviews, Kathy Foster-Patton 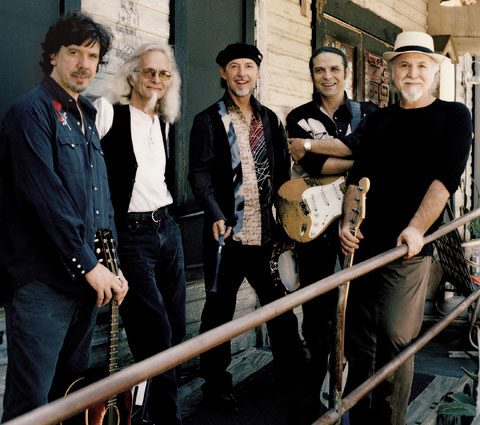 Riding high on the airplay for their latest recording, Behind The Levee, the subdudes are more popular than at any time previously in their nearly 20 years of existence. Their good-time take on New Orleans-style Americana music is rippling throughout the U.S., garnering new fans and pulling people to the dance floors.

Formed in 1987 for what the members thought would be a one-time gig at Tipitina’s in New Orleans, the subdudes released five albums and toured continually before they disbanded in 1997. Ultimately, they reunited in 2002, with three original dudes and two new members. They released their latest record, Behind the Levee, in January of this year and are proud to note that it was produced by Keb Mo’.

“Really, Behind the Levee has given us more radio play, especially the ‘Papa Dukee’ song. It has done a great job at bringing in new people to our shows,” said bassist, vocalist and percussionist Tim Cook, during a recent interview with The Marquee. That song, actually entitled “Papa Dukee and the Mud People,” recounts childhood events in Louisiana that subdudes Steve Amedee and Tommy Malone clearly recall to this day. Although it might appear they put the recording together in response to the ravages of Hurricane Katrina, the songs were complete and the record in the hopper prior to those tragic days.  By chance, the timing of the release took place a few months after the hurricane broke through the levees.

Along with Cook, Amedee (vocals, tambourine, drums, percussion, electric mandolin), John Magnie (vocals, organ, keyboards, accordion), Malone (lead vocals, electric and acoustic guitar) and Jimmy Messa (bass, guitar, vocals) form the latest reincarnation of the subdudes. Amedee, Magnie, and Malone were original members of the band when it coalesced in the late 1980s.  Their name was arrived at to try to please an audience that thought their sound was too loud — hence the subdued subdudes. The three remaining founders rose from the remnants of earlier bands from the late 1970s and early 1980s—The Percolators and the Continental Drifters.

Their next record is already in the works and they are talking nonstop about it, excited for the continuing evolution of their music. The group collaborated on quite a few of the tunes on the last CD and are big on working together to extract their best creativity.

Cook, who makes his home in Fort Collins, became close friends with the band members from its genesis. During the band’s first tenure, Cook wrote songs and hung out with the members, then went on tour with producer duties, while continuing to write with them. When the band went its separate ways in the late 1990s, Cook continued his friendship with Magnie, and it eventually sparked the band to reunite. “Finally one day John Magnie told me, ‘Play some songs with me!’ and that was the start. The two of us, along with Steve, became the Three Twins, first, then everything fell together and we got together with the other two guys and became the subdudes again.”

The subdudes are playing in Louisville at their local street fair in August and Cook can hardly wait. “This is our third time playing for these folks and we look forward to the Louisville gig every year. We love town concerts, with all the great people who attend. It’s fun — like playing at a revival. We don’t hold back! We’re ready to get the people dancing!”