Trending Stories from The Marquee
You are at:Home»Features»Wolf Parade in line to be the next breakout from Montreal
By Marquee Magazine on August 1, 2006 Features, Interviews, Timothy Dwenger 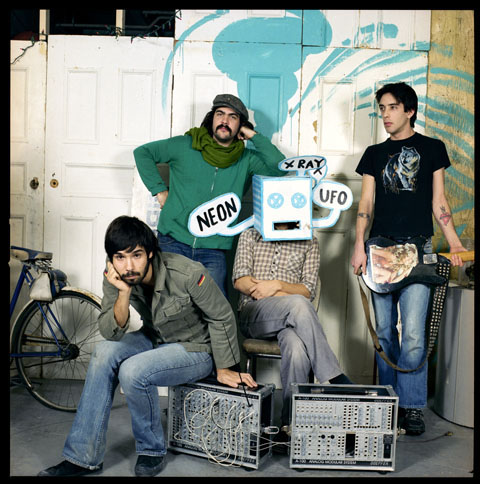 The story of Wolf Parade is one part hard work, one part raw talent and one part damn good luck. These five guys got their big break almost before they were a band.

“Dan’s (Boeckner, guitar/vocals) old band, Atlas Strategic, had done a tour with Modest Mouse back in the day,” said Spencer Krug (keys/ vocals) from his home in Montreal, as the band tested equipment in their brand new studio and prepped to head out on the road.  “Cut to 2004 and Isaac [Brock], the front man for Modest Mouse, called Dan up to find out what he was doing. We played him some of our new songs, he liked them, and right away there was talk of getting us signed to Sub Pop (Records), as he worked for them at the time.”

Brock quickly took the bass-less band under his wing and helped to set up a showcase at a loft party in Montreal so that Wolf Parade could strut their stuff in front of the Sub Pop brass.  “Before they sign a band they want to see what your live show is like,” said Krug. Apparently the show went well and, with a record contract in the bag, the band headed out to Portland to record their debut LP with Brock.

“Isaac was in the studio whenever we were, helping us along, giving us a fresh perspective on things to help songs reach their full potential,” said Krug. “He would even just point out the simplest of shit like, ‘Hey your guitar is out of tune.’  Having his opinion in the mix really helped to solidify the strength of the record. We trusted his input and what he had to say and that is the most important thing when working with a producer.”

The final product of the sessions, Apologies to the Queen Mary, was released by Sub Pop in September of 2005 and has done its part to fuel the buzz about Montreal being the Seattle of this decade. With Broken Social Scene, The New Pornographers and, of course, The Arcade Fire already making major waves in the highly competitive world of indie rock, these boys are nipping at their heels.

Hardly a year after Apologies hit the streets, Wolf Parade is a highly sought-after festival act.  Featured sets at Coachella and Austin City Limits are highlights for this year, but their first major festival gig took place during the 2005 All Tomorrow’s Parties Festival, aboard the Queen Mary in Los Angeles. While their set went well, the title of the record is a formal apology to the ship and her staff in light of what Krug described as “a bunch of friends getting drunk on a boat.  There was immature, childish, frat party fun, but it was really just an energy release after our first festival. We were the newbies and we were a little nervous,” he said.

Fortunately, their upcoming tour does not involve any ships but it does take the band from coast to coast, where they will be headlining in many cities for the first time. While the show is sure to be dominated by songs pulled from Apologies, Krug shared that they “like to play new stuff on tour as well as old stuff, as much as possible. Little details of the new songs get changed every night and the song really takes shape when you are able to play in front of an audience.” He revealed that there are currently three new songs that they would definitely be road testing before heading into their new studio to begin recording.

Though they were very happy with Brock’s input to Apologies, they plan to record the next album on their own. “We want to record in a way that won’t be conducive to working with a producer. We are doing it ourselves here in Montreal in a little studio that we just finished building,” said Krug. “Sub Pop isn’t breathing down our necks for the next record, so we are going to take our time. While we have about half of the album written, we are going to build some of it from the ground up in the studio. We all live quite close to the studio, so we can go in and out at our leisure and slowly craft an album that hopefully won’t suck.”