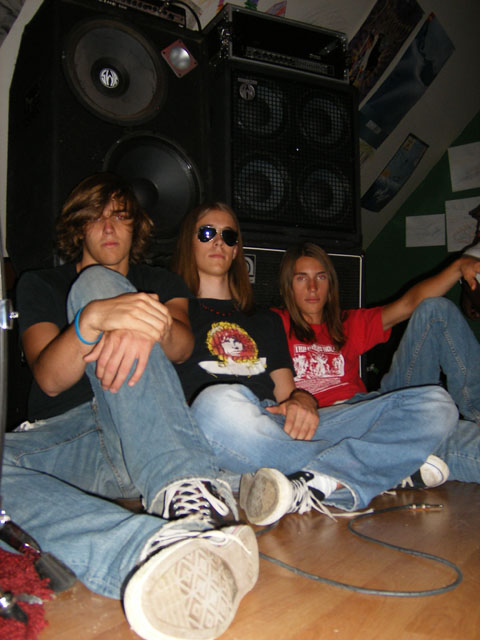 Slight attitude and an aversion to school: check.

Long hair to thrash around during jams: check.

On the rock and roll artist checklist, Von Skinny has hit all the marks. Comprised of three powerful, zealous musicians, this Boulder-based band is paying their dues as they work their way up in the local music scene.

While most musicians have to start from the bottom on the musical ladder, playing the dingiest of venues to small audiences or worse, no audiences, it is all part of the rocky path to stardom.  However, Von Skinny, which is Ben Sproul, 17, on guitar and vocals, Andrew Oakley, 16, on drums, and Vince Elwood, 17, on bass, have an added obstacle to most novice musicians: their ages.

“Venues don’t look at you the same way. We have to get work permits for our shows,” said Sproul in an interview with The Marquee.  “Promoters try and take advantage of you, and venues can give you a hard time.”

Von Skinny also struggles to get their young fan base into their shows with age limits, find places to practice without disturbing parents and to prove themselves as serious musicians.  However, once one witnesses this trio, their bold energy erases any doubt of their musical prowess.

Through an ambitious concert schedule, Von Skinny is seizing every opportunity to display their raw rock ballads, even if it means playing under some outlandish conditions. For instance, at a recent basement venue the band’s set was continuously interrupted by power outages. At another show in Central City, they were forced to play in the street when their venue fell-through and then were yelled at for disturbing opera fans attending a performance down the street. Von Skinny regards it all as a learning experience. “We are grateful for the good shows, but I’d rather play bad shows than no shows at all,” said Sproul.

Their passion for music is evident during their performances, and undoubtedly Von Skinny would rock with the same energy with or without a packed house. Their dominating music and confident stage presence pairs well with the smooth, unwaivering voice of Sproul. With jams not for the weak of eardrum, Von Skinny warns its listeners to bring earplugs. “The volume makes you feel the music more. It’s just part of the music,” said Sproul.

Von Skinny began playing together a year-and-a-half ago and have already developed a very close connection. Their band name comes from Sproul’s nickname: Benny Von Skinny, given to him by his brothers, who comprise two-thirds of the band Rose Hill Drive. Sproul is not the only tall, skinny one of the bunch.

Although they are “influenced by everything,” some of their prominent muses include Jimi Hendrix, Stevie Ray Vaughn and Led Zeppelin. Like any true rock and roll artist, their music explores the open road and of course, the occasional love song, since girls “cause some serious emotions,” according to Sproul. But don’t expect to hear any songs laced with tenderness; they like to keep their songs as heavy as possible.