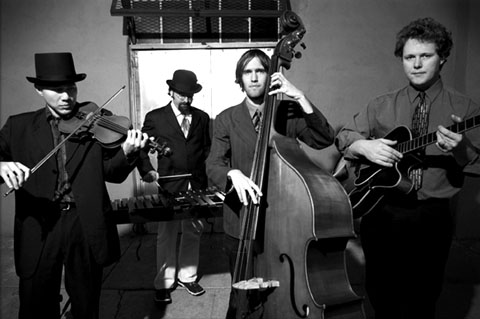 Boulder Acoustic Society is revising American roots music, taking contemporary Americana and infusing it with just enough weirdness to turn it on its head.

For the past three years, BAS has been impressing audiences on the Front Range and beyond with their twisted take on traditionalism. The core instruments played are upright bass (Aaron Kiem), guitar (Brad Jones), violin (Kailin Yong), and marimba (Scott Higgins). However, each  member is a multi-instrumentalist, and it is not uncommon to hear ukulele, banjo, washboard and mandolin at one of their shows.

The Marquee spoke recently with Aaron Kiem about what informs their music, and just what it is about them that is unlike anybody else. He began by describing the music as “diverse for the string band world,” an accurate if conservative assertion, seeing as the audience is just as likely to hear Frank Zappa as Doc Watson.

“We all are ex-classical, ex-rock, and ex-funk musicians of various sorts, but we all found a voice in traditional American jazz and hot string band music. It’s almost like we didn’t choose it, but it’s how we could effectively communicate with each other,” said Kiem. “It became a language that we were comfortable with.”

“When I played classical music,” he continued,  “I felt like I was giving my heart and soul and not getting anything back. But when it comes to string band music, it feels like I get all of that back ten-fold.”

The Boulder Acoustic Society recently debuted its second album, 8th Color, to high critical praise. It was produced by local resophonic slide guitar master Sally Van Meter, who was taken by both the band’s first release, 2004’s So Many Stars in the Sky, as well as their tight live performance.  Long-time fan Darol Anger also makes an appearance on the new album.

Boulder Acoustic Society took second place in this year’s Telluride Bluegrass Band Competition despite, as Kiem described, “having one hand tied behind our backs.” The contest is strictly for stringed instruments, so the band was forced to neglect their cherished marimba and most of their offbeat repertoire. The fact that they placed second amongst traditionalists while being somewhat out of their element speaks volumes about their musical skills.

“We like people that don’t mind being a little different. We love traditional music and draw liberally from these traditions, but we’re not comfortable when people are so traditional that they don’t hear us.” said Kiem. “One thing that we really appreciate about what we do is that we can draw from dozens of musical traditions, but we don’t feel like we have to do anything in particular, because nobody has ever had these instruments together, ever.”

The ukulele, while not a core instrument, is of particular importance to the band. “It’s a mania-slash-interest,” said Kiem. “We’re really focused and dedicated to that instrument.” So much so that the band published a book of ukulele songs in 2004.

BAS will bring “a night of vintage hot jazz” to the Trilogy Lounge, which will showcase their many jazz stylings. “Since we always do different things we thought it’d be nice to do a show that focused just on one style of music,” said Kiem.  The show will also feature some real outside talent, including Greg Schochet (the Hi Beams), Eric Thorin (Open Road) and Greg Harris (Pete Wernick’s Flexigrass).