Trending Stories from The Marquee
You are at:Home»Features»Pearl Street Allstars return for another Funky Good Times Benefit
By Marquee Magazine on September 1, 2006 Features, Interviews, Matt Marty 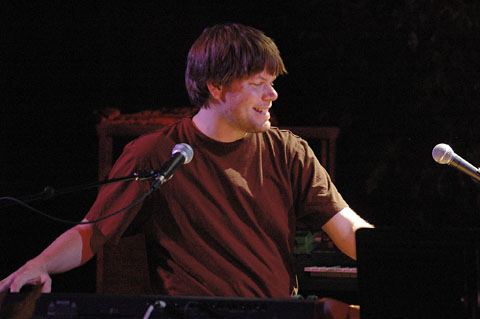 As summer draws to an end and the CU kids return to school, the depression sets in of having to wait nine months for next summer’s concert series. But before the summer actually draws to a close, the Mountain Sun’s birthday party (nicknamed the Funky Good Times Benefit Bash) will make an interesting segue from outdoor festival to indoor party with the help of the Pearl Street Allstars.

Who are these Allstars, you might ask? With an ever-evolving line-up year to year, this year’s line-up looks to be one of the most solid gatherings to date.

The two staples of the Funky Good Times event are bass legend George Porter and String Cheese Incident member Kyle Hollingsworth. The Marquee recently caught up with Porter, who is entering his third year as an Allstar. “One day, my phone rang from Colorado and it hasn’t stopped,” said Porter.

Porter’s career began back in the ’60s when he recorded with Allen Toussaint. His greatest legacy might be with his original band, The Legendary Meters. Throughout the last thirty years, Porter has worked with Paul McCartney, Dr. John, David Byrne and Patti Labelle, just to name a few.

It goes without saying that Porter is a world-class musician, but the other reoccurring name in this event is Kyle Hollingsworth, who may not have the reputation of Porter, but is well on his way. Hammering out the keys for The String Cheese Incident, Hollingsworth is known for his work ethic and strong music background, graduating from Towson State University in Baltimore with a degree in jazz piano performance.

First-timers to the event this year include Karl Denson from Karl Denson’s Tiny Universe, Eric Krasno from Soulive and Neil Symonette, who is the drummer for Leo Kottke and Mike Gordon. “The only one I haven’t played with is Neil,” said Porter.

When it comes to a group of musicians who don’t regularly play with each other, it seems like they would be liable to make a lot of mistakes. “That is the fun of it all,” said Porter, “The day before, we play in an empty rehearsal hall for two hours, and then the next, night we play the gig. It leaves a lot of opportunity for mistakes, but that is what makes this event so fun.”

With a powerhouse line-up every year, some great musical memories are made for the fans, but also for the musicians who get to crawl out of their shells and play with new people for a night. “My favorite memories from this event aren’t anything in specific, but just the music we create,” said Porter. For Porter, who enjoys playing in Boulder, this event is a great way for him to play with some new folks and play one of his favorite stomping grounds. “I have never had a show fail in Boulder, so I keep coming back,” said Porter.

Trying not to get lost in the music, it is important to remember what this event actually benefits. All proceeds from the event will go to KGNU 88.5 FM and 1390 AM, Boulder County’s only non-profit community radio station. KGNU has been part of Boulder for 25 years, playing a diverse musical selection and reporting on local, national and international issues. Mountain Sun Pub and Brewery, who is celebrating their thirteenth year in business, is making all the funky good times possible and will, of course, have on hand their Pearl Street Porter.