Trending Stories from The Marquee
You are at:Home»Features»Split Lip Rayfield guitarist faces his mortality with one final tour
By Marquee Magazine on September 1, 2006 Features, Interviews, Kathy Foster-Patton 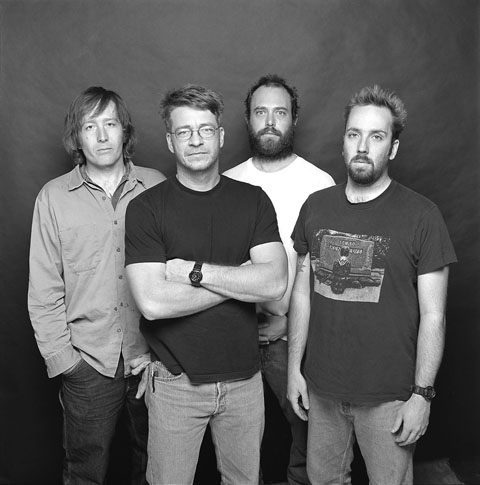 How many musicians react to the diagnosis of terminal cancer with a decision to go on tour one last time? That’s just what Split Lip Rayfield vocalist and guitarist Kirk Rundstrom decided to do after going through surgery, chemotherapy and then the news that his illness was not curable. As the band cruised down the road to Manhattan, Kansas for yet another sold-out show on their “final” tour, Rundstrom spoke with The Marquee about his health, his music, and how much he wants to live life.

“I’m doing good, you know. Yeah,” Rundstrom said. He started with a reassurance to someone he doesn’t know and when asked what he would like to talk about, turns the conversation to his excitement over returning to Colorado. “Colorado is one of my favorite states in America. I just absolutely love it. I love the mountains, I love skiing. I love our fans there. I’m really excited about getting to go play there one more time. I have a lot of really close friends in Colorado and I’m excited about seeing them.”

The hard questions came next, which Rundstrom answered as matter-of-factly as when he explained that Manhattan was the home of K-State football. Queried as to why he decided to go on tour, he explained, “The doctors have given me not much time to live and I’m able to do it — if I want to do it. The longer I go without chemotherapy in my body, the better I feel. I love playing music and I wanted to go do it. I’m able to do it. I’m not giving up just because they said I don’t have much time to live. I want to live. I’m doing alternative treatment. I’m eating real healthy, you know. I don’t want to be in that bed. I’ve been in that bed since January and I wanted to be out. So I totally started getting my foot out the front door and walking and building my strength back up and started making my hands form the chords on the guitar and then it all came back slowly but surely.”

Rundstrom has a simple goal for what he expects to get out of the tour. “I just want to try to play as good as I can and do as good a job as I can. I take a lot of pride in my work. I want to do a good job. I want to get out there and live life. I’ve been stuck in a bed sick since January. I don’t want to be there no more,” he said.

In addition to Rundstrom, Split Lip Rayfield includes Eric Mardis on banjo and vocals, as well as Jeff Eaton on bass and vocals. In a move that delighted followers of the band, Wayne Gottstine, an original member and mandolinist, returned for these shows that are selling out at venue after venue. The excitement from their fan base is palpable on the Split Lip myspace site. One message fairly shrieks, “I’m going to experience Split Lip Rayfield LIVE TONIGHT?!?! AND FRIDAY?!?! AND SUNDAY?!?! WITH WAYNE?!?! After 15 Split-lipless months?!?!!”

Formed in 1998 as a means to get free beer, Split Lip’s music is hard to classify, termed alternatively bluegrass or punk or death metal or even cow punk. Their song choices may be bluegrass (Bill Monroe would turn over in his grave if he heard their versions of some of his tunes) or country, but the delivery is fast and furious and sometimes downright insane. Rundstrom explains it as “rock and roll played on bluegrass instruments.”

After his surgery, when the doctors detected further spread of his cancer, even they agreed that further chemotherapy was pointless. Rundstrom explained, “There’s no reason for me to do it. The doctors said it wasn’t going to stop the cancer and if anything at that point you’re killing all the good cells and your body can’t fight it off naturally.”

Only when asked about the future, did Rundstrom falter slightly, searching for the right words. “I have no idea. I’m just trying to get through today. I’m really focused on here, right now. Right now I’m feeling good. I just ate an orange. I’m drinking some water. I’m taking care of myself. I’m gonna go stretch out and do my best for the show tonight. I’m not giving up by any means. I always dreamed about growing old and playing music, and I still haven’t let go of that,” Rundstrom said.

Rundstrom writes a majority of the band’s original music. One of the tunes that he is most proud of is “Outlaw,” about a guy robbing a bank with a .45 revolver.  Some of the lines rage, “I think it’s time to go. I’ll kick your ass from here to Mexico.” This could be his mantra now, on his last tour. He’s an outlaw to the end. As the fans say, “Get Hip to the Lip.” This might be the last chance.

A relief fund for Rundstrom has been established at www.splitliprayfield.com.

• Head for the Hills