Trending Stories from The Marquee
You are at:Home»Features»White Whale comes sailing out of the gate with ‘Roxy Sabbath’ sound
By Marquee Magazine on September 1, 2006 Features, Interviews, Timothy Dwenger 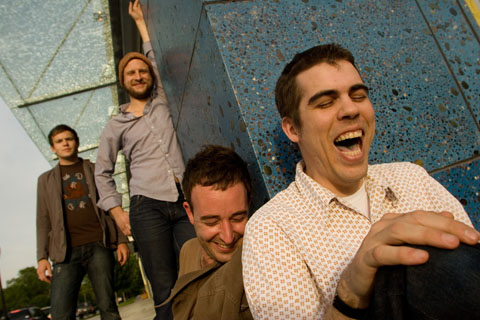 Earlier this summer the Kansas State House of Representatives declared July 26, 2006 to be White Whale Day in the state of Kansas.  Had there recently been a discovery of an ancient fossil?  Had Moby Dick been hunted down in Kansas? No, the day was established to commemorate the release of Lawrence band White Whale’s debut album on Merge Records. While buzz about bands of an indie nature usually stays at a relatively low level and makes its way only to the ears of those ‘in the know,’ White Whale is apparently a favorite at the Kansas State House.

With lyrical themes that, at times, call to mind The Decemberists, and music that has drawn comparison to The Arcade Fire, it is easy to see why White Whale’s debut album, WWI, has drawn such widespread attention merely months into the band’s existence.

The eleven tracks that make up WWI convey a maturity often lacking in indie-rock. Themes of lost love and the realities of life weave through songs which often take place in nautical settings, leading to the obvious comparisons to The Decemberists. “I think that people are dwelling on it a little too much,” said bass player Rob Pope in a recent interview with The Marquee. “The nautical themes: whatever. It was really much more of a coincidence than you would be led to believe by listening to the record. It all just kind of fell together and took this theme. We were in no way trying to rip off bands like the Decemberists.” In fact, Pope and his bandmates have dubbed their sound “Roxy Sabbath” (equal parts Roxy Music and Black Sabbath).

While ‘supergroup’ may be stretching things a bit, this is a talented group of musicians who have all had the experience of playing in successful bands in the past. “Everyone has toured before in previous bands, so we all know the etiquette of touring,” said Pope, who had recently returned home from White Whale’s first proper run of shows. “I think the highlight of this first tour was that we always found a place to stay. We are getting it together and the audiences seem to be digging it. It will only get better from here, I imagine.”

As they continue to get more comfortable on stage, White Whale will continue debuting songs from WWI. “We just started playing “Fidget and Fudge” on this most recent tour and that was a bit of a challenge, but it is my favorite to play live right now,” said Pope. “I think our live show is a little more bombastic than the record. There is just more energy behind it. In a live setting, where we have control over how loud our amps go, we are going to pour a little more into it. We like to play loud.”