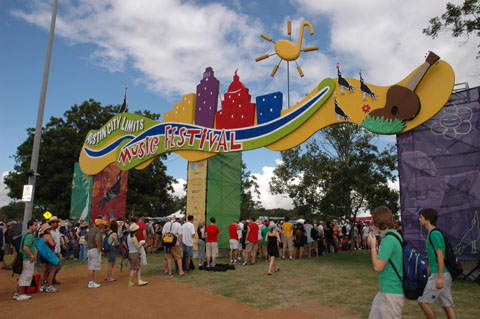 Since I got back from the Austin City Limits Festival, which ran Sept. 15 – Sept. 17 in Austin, Texas, several people have asked me what the “highlight” of the festival was. Let me tell you, I haven’t been asked a harder question since “What’s your favorite band?” The reality is that there were many, many highlights for me among the three days, eight stages and 130 bands, and singling out just one wouldn’t do this festival, or my memories, any justice at all. So I am going to share as many as I can.

For instance, I couldn’t go without mentioning Cee-Lo and Danger Mouse and the rest of Gnarls Barkley, who played the main stage on Friday afternoon. Dressed in lab coats and plaid shirts, they introduced themselves as John Nash and the Beautiful Minds while their 13-person band covered Thomas Dolby’s “Blinded Me With Silence.” After an energetic set that included “Go-Go-Gadget Gospel,” “Smiley Faces” and, of course, “Crazy,” these guys have made me believe soul music can once again make it in the mainstream.

Rather than funked out soul, it was traditional Irish soul featured Friday evening when Van “The Man” Morrison took the stage clad in trademark dark suit and pork-pie hat. Over the course of his 90 minute set, Morrison proved that he is still every bit the musician that he was when he rose to fame in the ’60s. Though he had a full band with him, including a string and horn section, it was the man on Hammond B3 organ who stole the show.  It would have been nice if Morrison had scattered the “hits” throughout the set a bit more, but he did run through “Bright Side of the Road” and “Moondance” before wrapping up the evening with “Wild Night,” “Brown Eyed Girl” and “Gloria” to send everyone out into the humid Austin night.

Saturday began for me with Centro-Matic, a Texas band that made it to the “big stage” for the first time. Their fuzzed out bar-room rock, highlighted by Will Johnson’s warbling tenor, was a great way to kick start the day as they rocked through “Mighty Midshipman,” “Flashes and Cables,” “Calling Thermatico” and “Patience for the Ride” during their 60 minutes of “outdoor, mother fucking, big stage, rock music!”

Speaking of big stage rock music, The Secret Machines (see page 5) rocked the Heineken Stage later Saturday afternoon. From the opener “Alone, Jealous and Stoned,” their afternoon set was a who’s who of classic rock influences that ranged from Rush to Pink Floyd to Led Zeppelin, while somehow managing to maintain a sound that was uniquely their own. These three extremely talented musicians worked together seamlessly to become one of the tightest bands I heard the whole weekend.

Known for stark arrangements and a very mellow vibe, Iron and Wine surprised me a bit on Saturday night. After opening with “Sodom, South Georgia” a shaggy Sam Beam called on his band to ratchet things up a bit for this “big festival crowd.” Apparently afraid he couldn’t recreate the intimacy he is known for in such a huge setting, Iron and Wine proceeded to rock out. While it was great to hear songs like “Freedom Hangs like Heaven,” “Evening on the Ground,” “Jezebel” and “Naked As We Came,” I have to admit that I prefer the original arrangements to the ones that dominated the ACL set.

Sunday afternoon brought one of the rawest rock and roll performances of the weekend. Sam Roberts Band came on to the Heineken Stage about 15 minutes early (a rarity at ACL) and was covered in sweat midway through their raucous opener, “The Resistance,” from their recent release Chemical City. This band has captured the essence of rock and roll. The band consists of two driving guitars, bass, keys and big huge Bonham-style drums, and Roberts himself plays the part of the charismatic front man as well as anyone today.

The sunset slot on Sunday evening welcomed one of my most anticipated sets of the weekend: The Flaming Lips. As their set began with the sun beating on the stage, Lips front man Wayne Coyne pulled his now famous bubble boy routine, climbing into an enormous plastic bubble which was then rolled off the front of the stage into the crowd. He proceed to walk and crawl on top of thousands of hands while an army of Santa’s took their positions stage left and an army of aliens took position stage right. The highly interactive and slightly insane set saw confetti launched from massive cheerleader style bullhorns, huge exploding balloons, giant inflatable aliens, Santas and spacemen, and, of course, Coyne doused in fake blood. As day yielded to night and the festival was drawing to a close, The Flaming Lips finished their memorable set with their melancholy mega hit “Do You Realize.”

The weekend wrapped up with summer festival stalwarts Tom Petty and Heartbreakers proving to the ACL crowd that they were back with a vengeance.  They tore through such hits as “Mary Jane’s Last Dance,” “I Won’t Back Down” and “Free Falling” before a huge storm ripped through the park dumping rain on the 60,000-plus in attendance.  The band was forced to take a 30 minute break to allow the lightning to pass, but returned to finish out their set for those that stuck it out.  The drenched crowd sang along to “Don’t Come Around Here No More,” “Refugee” and “American Girl” with such passion that Petty commended us for our efforts before careening through “You Wreck Me” to close out the fifth ACL Festival in true rock and roll fashion.

So there you have it, a quick glimpse into the three days I spent running around a huge park in Texas trying to catch as many bands as possible.  Sure it was hotter than hell, the food could have been better, and at $4 bucks a can I spent a hell of a lot of money on beer, but rest assured I would do it again in a heartbeat. All 6o,000 of us were there to soak up live music and The Austin City Limits Festival is clearly one of the very best festivals the music industry has to offer these days, and even if it wasn’t, the fact that it is in Austin would be reason enough to go.