Trending Stories from The Marquee
You are at:Home»Features»Cabaret Diosa wraps it up after 10 years with two back-to-back shows
By Marquee Magazine on October 1, 2006 Features, Interviews, Jonathan Keller 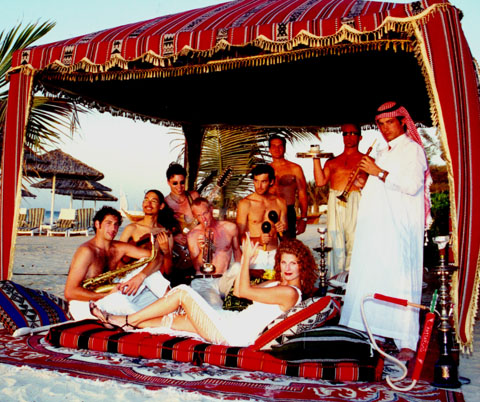 After 10 years of spreading their self-proclaimed “New Mambo Revival” to fans across international borders, Cabaret Diosa is finally calling it quits with two final shows at the Boulder Theatre on October 26 and 27.

The concerts are titled “Willie Juanka and the Cha Cha Factory” and are billed as a two-night festival of decadence and dance. “It is going to be a final celebration,” said percussionist Manuel Rabinizmo in a recent interview with The Marquee. “This is going to be it.”

With its members hailing from Colorado, Chicago and Austin, Cabaret Diosa has been a Boulder-based 10-piece mambo rock ensemble that is as theatrical in its live show as it is diverse, as evident in each member’s stage name. In addition to Rabinizmo, the group features Juan del Queso and Montana del Fuego as lead vocalists and also features Miguel Ramos (viola/keyboards/vocals), Diego Ricardo Ignacio (guitar/vocals), Pablo de Gallo (upright bass/vocals), Juan de la Selva (drums/percussion) and a horn section made up of Don Grandisimo de la Misconception, Arturo Sabado, Dinkis Con Creama.

Cabaret Diosa is not just a mambo-rock band, but rather “messengers of the New Mambo Revival,” which is “a grassroots socio-spiritual political movement that is now engulfing the globe in its all-consuming conflagration.” Clearly, the band has always taken its music seriously but they are never too shy for the extravagance of theatre.

“We have sent our message out long enough,” Rabinizmo said. “In all honesty, it just got to a point where everyone was really into it for about eight years, but constantly being broke and being away from our families has finally taken its toll.”

Originally formed in 1996 by Chris Till and Miguel Ramos, Cabaret Diosa was their unique vision of what an underground mambo band should be. According to guitarist/background vocalist Dario Rosa, after the band was formed, Till left to become a gypsy, leaving the other band members to carry on. Till left the band with a fictional mystique that Cabaret Diosa was a Cuban band from the 1950s that fled Cuba when Fidel Castro took control of the country. After fleeing, they came to the United States, where they found the fountain of youth. Drinking from the fountain has allowed them to create music and live theatre on the stage for the last 50 years. The time has now come for the band to retire their ageless act.

Cabaret Diosa has been in the forefront of the Colorado Front Range music scene for many years now, selling out venues such as the Boulder Theatre and the Aggie Theatre and headlining such festivals as the Denver LoDO Fest. With a firm grasp on the local music scene, Cabaret Diosa has also had a brush with national fame in their 10 years together. They have released three studio albums, VooDOO Pinata, Hi Fi Latin Exotica and their most recent, Apocalypso. They have also released a live album, Live At The Fox¸ which was recorded at one of their favorite venues in Boulder. Cabaret Diosa has also opened for such legendary acts as James Brown, Harry Belafonte, Santana, Maceo Parker and Widespread Panic, and shared the stage with acts such as Ozomatli, Karl Denson and the Squirrel Nut Zippers.

The band has clearly left a mark on the “underground mambo scene” they set out to create and had the success most bands would welcome with open arms. However, Cabaret Diosa now feels it is time to part ways on good terms.

“We are all leaving on good terms,” Rabinizmo said. “It was a pretty mutual thing. We are all moving on to other things and keeping busy.”  Indeed they are. Rabinizmo has started his own video company in Boulder and is going to be working with Rose Hill Drive on a music video.  Arturo Sabado (saxophone/flute/vocals) is living and playing music in Austin and Juan del Queso (vocals/percussion/clarinet) has been improv-acting in Chicago. All members will be back for the Boulder Theatre shows, including original member and guitarist Dario Rosa, who is finally leaving the Federal Witness Protection Program to play these shows. Due to the sensitivity of the case and his respect for Rosa, Rabinizmo refused to comment about the reason Rosa was placed in the program.

“He has been living in Utah, pretending to be a Mormon and he is a pretty debaucherous guy,” Rabinizmo said. “Luckily, the people he was hiding from are now either in jail or killed.”

With Rosa back in tow for the “Willie Juanka and the Cha Cha Factory” shows, the theatrical element should be fully expected, especially with the shows coinciding with Halloween weekend. Cabaret Diosa’s Halloween shows have become legendary over the years and Rabinizmo promises these farewell shows will not disappoint. Due to the band’s theatrical stage show, the October 26 show is rated R and the October 27 show is rated NC-17.

“We want people to come prepared for a good time,” Rabinizmo said.