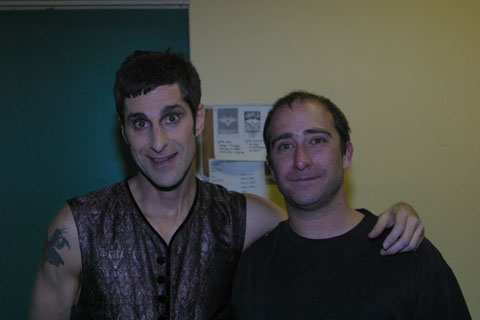 On a hot August afternoon Don Strasburg, one of the most powerful men in Colorado’s live music scene, sat at a sandwich shop on the Hill in Boulder, juggling his cell phone, Blackberry and a colossal sandwich. Every few seconds he’d drop one to pick up another, and it seemed like it was only a matter of time until he accidentally took a bite out of his Blackberry.

After each check of his phone he’d call out a new number: “Five minutes now,” he would spat.

What I thought was a series of negotiations for a high-profile gig that Strasburg was booking for his then-job as vice president of Live Nation’s Rocky Mountain Region was in fact a coup in the midst. Strasburg wasn’t setting up a conference call for a Red Rocks or Pepsi Center gig, he was getting his ducks in line to shake up the live Denver music scene in one of the biggest moves in recent years — a move so big, in fact, that while the initial splash may be old news today, the ripple effects continue to deluge the industry with what seems like daily tsunamis.

Days after my meeting with Strasburg, it was announced that he, along with fellow Live Nation talent buyer Brent Fedrizzi, would be leaving the top-seeded Live Nation to take posts with the country’s second largest promoter, AEG (Anschutz Entertainment Group) Live. (Fedrizzi is currently under a non-compete from Live Nation, and will not take his post at AEG for several months.)

The announcement sparked rampant industry speculations that Chuck Morris, a man who has served as a mentor to Strasburg, would also leave Live Nation. Those speculations were confirmed in late September when the Denver Post announced that Morris would resign his position with Live Nation on Dec. 31 when his contract expires, in order to move over to AEG as president and CEO.

Conjecture continues that other people who have worked with Morris, Strasburg and Fedrizzi over the years will also be jumping ship to AEG, as the company positions itself for a full-on assault of the Denver market.

Throughout that initial meeting with Strasburg, and in the conversations that followed, the picture of who Strasburg is, came fully into focus. Don Strasburg is a tenacious pitbull — one who will bite the hand that feeds him, if he deems it necessary. He’s a man who pulls no punches and seldomly, if ever, apologizes for it. But it was also made abundantly clear that what he does, and how he acts is based on his love for live music and the magical moments that it can create. He IS a pitbull, but he’s a pitbull with a weird and twisted heart, capable of great compassion.

The following are excerpts from that initial interview and follow-up phone conversations:

Marquee: What was the first concert you saw?

Marquee: First album you ever purchased?

Strasburg: The first album I ever really remember owning was Fats Domino I’m Walking at six years old. But I remember being about 13 or 14 and joining the Columbia House Music Club and getting 12 records for the penny, but I don’t remember any of the titles I got.

Marquee: What’s on your playlist today?

Marquee: What was your first industry job?

Strasburg: My first job was a one off, one night roadie gig at Candlestick Park for the Monsters of Rock Tour in 1988 or ’89. But my first real gig was when I was working at Colorado College and the first show I promoted was Phish at the Boulder Theater and Phish at Colorado College for Earth Day 1990. They weren’t even signed to a label yet. It was the second time they came to Colorado and the first time was a disaster in Telluride.

Marquee: What’s your dream show? If you could book anyone anywhere what would it be?

Strasburg: The big, big, big, big, big boys at The Fox. (Strasburg is also owner of the Fox Theatre and oversees operations and booking at the venue.) You know, Pink Floyd, The Stones, The Who. But I think anything beyond that is limiting my dreams.

Marquee: What’s changed the most in your business in recent years?

Strasburg: One of the biggest is that the paradigm has shifted from recorded music to live music. Suddenly guys who do what I do went from being secondary sources of income for artists to primary sources. Suddenly the artist and the promoter and the live relationship is more of their daily bread and their earnings than the record. It’s put a lot more pressure on the artists’ live performance and on the money and all of that kind of stuff.

Marquee: (Note: the next two questions were asked in regards to Strasburg’s post at Live Nation, but he has said in follow-up interviews that his move to AEG will not affect ticket prices in the Denver market.) Is an $8 “convenience fee” on tickets really convenient for anyone?

Strasburg: We fought really hard at our primary venues to always have a no service charge policy at our venues. So, if you want to get off your ass and drive down to the Fillmore on a Saturday and not get the convenience of sitting in your fucking underoos at your computer, drinking a cup of coffee and eating your fucking Honey Combs then you can get tickets at face value. More seriously, though, it’s very difficult to properly and equitably sell tickets to everybody at the same time and have a system that can manage the volume and capacity and expectations that the consumer has. Right now, the only service that exists that can manage the level we need to manage is Ticketmaster, so they have a fee that they charge to provide that to us and we’re at a loss to figure out a better way to do it.

Marquee: But, if a ticket is ultimately going to cost $50, why not make that the bottom line, instead of making it a $35 ticket and adding $15 in fees?

Strasburg: There’s slightly different costs for buying tickets in different forms. If you buy at an outlet, that’s a different price than if you buy it on a credit card or on the phone, if you buy four tickets it’s cheaper than two tickets … My personal opinion is that we should have all-in pricing.

Marquee: Why do you do what you do?

Strasburg: To me this is a culture of people who love music and love the live music experience and love to dance. And it’s a culture of people that feel that it’s their job to produce these events and make sure they’re done properly. We can make a living doing it, but there is also a sense of personal pride in knowing that we’re responsible for helping our community have that kind of outlet and I feel like it’s a political outlet. I believe that hundreds or thousands of people dancing in a room together is inherently a political statement, even if it’s just one of having fun. It says that we believe in being human people with love and communicating with each other and letting go of the bullshit to just enjoy each other and be together in a larger group. Sometimes people want to go listen to punk rock and vent and God bless that they can vent together and it’s a great outlet to express it. I’ve always felt I was given a God-given responsibility to protect our community’s live environment and as I get older, my role changes and I go from being on the front lines to the back room, but either way my job is to nurture the other people that do what I’ve done and set an example for the community.

Marquee: Can you sum up why you made this move to AEG?

Strasburg: The number one thing was that a very close friend of mine said to me that the only difference between a groove and a grave is the size of the hole. I was in a very comfortable groove at my former employer, but it was not a challenge and you know I needed to do something where I could express myself and have more growth opportunities. Really, it’s a human, personal decision whether I want to work 9,000 hours a week, and have little life, or if I want to focus and enjoy it a little more because I have more time and energy to put into things that I’m passionate about.