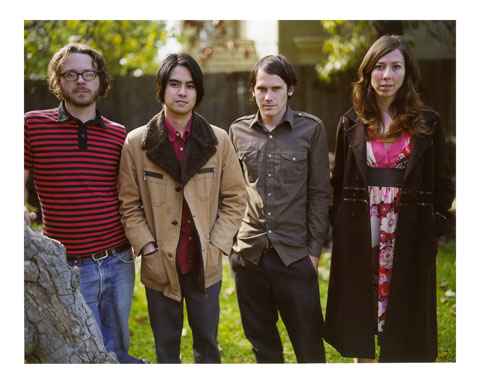 “We’ve got an in-store at Amoeba Records here in L.A. tonight,” said Brian Aubert, guitarist and front man for Silversun Pickups, in a recent interview with The Marquee. “The gig was planned a couple of months back but we just found out about it. Our label knew, our manager knew and people thought we knew, but we actually found out about it while reading the paper just like you would. We called our manager and said, ‘Hey is this happening?’ Sure enough, it’s happening. We were all just glad we were going to be in town and could make our own gig. It’s really funny how it works sometimes.”

While in-store performances are often known for their stripped-down sound, Aubert said his band had no intention of toning things down or going acoustic for the Amoeba event. “We know a guy at the store and asked him if we should play acoustic or mellow things out for the in-store and he said ‘No, just be yourselves and play loud.’ I’m not sure they know what they’re in for, but we are going to hammer through seven songs back-to-back for the full 30 minutes so no one can tell us we are being too loud. By the time they can tell us we’re too loud we’ll be done and packing things up,” Aubert chuckled.

Over the course of the six years Silversun Pickups have existed, this kind of attitude has solidified their live show into a deafening amalgam of rock, psychedelia and shoe-gaze pop that leaves audiences gasping for breath and screaming for more. The tight, polished sound the band has achieved is a far cry from their humble beginnings in a practice space in the Silver Lake neighborhood of Los Angeles.

“I had just quit a friend’s band and was just kind of hanging around a practice space in Silver Lake when my friend Nikki decided she wanted to learn how to play bass,” Aubert remembers. “I said come on down. At the same time, my ex-girlfriend Elvira said, ‘I wanna learn how to play drums.’  She came down and learned about three or four beats. A week or so into that, Nikki and Elvira decided to make a tape to send into the CMJ Music Festival in New York. I thought it was ridiculous because we had no idea what we were doing and weren’t actually a band, but I went along with it. We needed a name to put on the tape so we looked out the window at Silver Sun Liquors across the street and said ‘Silversun Pickups? Okay.’ We actually got into CMJ and really couldn’t believe it. We decided to go. Not because we wanted to be a band but because we wanted to go to New York and hang out and see great bands. On that trip we ran into the guy that owns Spaceland here in L.A. and he asked us to play a gig the day we flew home. We took the gig and things just started to happen from there.”

It has been six years since that nameless trio made a tape on a boom box and accidentally started a band. In those six years Aubert (guitar and vocals), Nikki Monninger (bass) and the name (Silversun Pickups) are the only things that have remained constant. For years, The Pickups played with countless line-ups in clubs all over Southern California and slowly but steadily built a loyal local following. Recently, things changed.

In July of this year the first full-length album from Silversun Pickups, Carnavas, was released by Dangerbird Records. College radio around the country picked up the album and put it into regular rotation and it wasn’t long before major stations in Seattle and Los Angeles followed suit.  Even MTV got in on the action, featuring the Pickups on the “You Hear It First” segment of MTV News.

“It’s been amazing on tour this summer and really, really bizarre at the same time. There were cities on the tour we had never been to and it was pandemonium in the venue. We’d get up there and people were smashed up against the stage and jumping up and yelling song titles, especially in Minneapolis, Chicago and Indianapolis, of all places,” Aubert said. “People were going insane and we’re just up there like, ‘What’s happening?’  After every show on the tour we’d go backstage and look at each other and just say, ‘I don’t know what’s happening, this is crazy.’ It has really felt good for me, personally, because it took so long for us to put this record out that when people were yelling song titles and singing along I knew it was real and people were buying it, people were listening to it and best of all people were liking it.”

Aubert confesses that with all the recent hype that has surrounded his band he has been getting recognized around L.A. a lot more. “It is a touch surreal when I get recognized in Silver Sun Liquors picking up a six pack. I hear things like,  ‘Holy crap I’m watching a Silversun Pickup doing a Silver Sun pick-up,’ and I just have to laugh. I guess it’s good that after all this time people finally know who we are. It looks like we’re doing something right.”