Trending Stories from The Marquee
You are at:Home»Features»Boulder’s most notorious bad ass, Jello Biafra, returns to Denver for spoken word show
By Marquee Magazine on November 1, 2006 Features, Interviews, Karen Maye 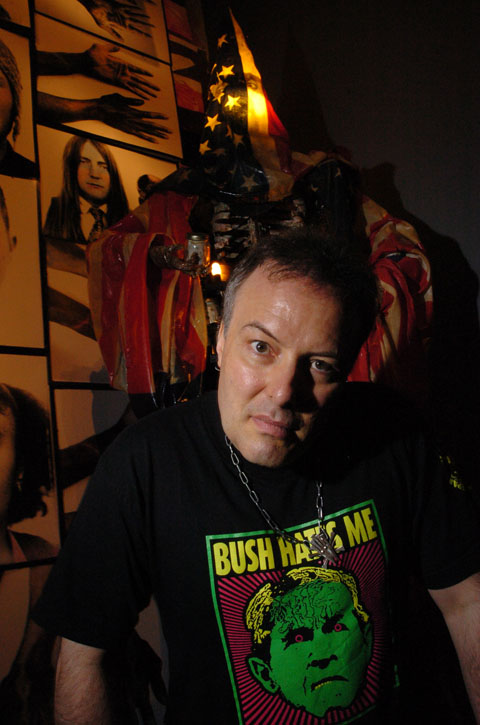 So many words, so little time. This seems a good way to define Jello Biafra, old school punk, writer, activist, and political poet. Oh, and he also runs one of the oldest independent underground record companies still around today. Biafra may be best known for his work with the Dead Kennedys, or his campaign for mayor of San Francisco in 1979, or even his run at President in 2000. Either way, the anomaly that is Jello Biafra demands to be heard.

Biafra’s roots run deep in Colorado. Born and raised in Boulder, the eclecticness of the town helped to fuel the wrath of his younger years.

“Boulder was actually a pretty interesting place to grow up, because the ‘Boulder bubble’ you talk about now was very different then,” Jello Biafra told The Marquee in a recent interview. “When I was just starting school, it was more of a sleepy mountain and college town, and then late ’60s early ’70s is when hippies swarmed into town by the thousands.”

The new visitors wreaking havoc on the town appealed to Jello, and he embraced the counter-culture.

“That was back when long hair really scared people and was actually dangerous, so of course I was fascinated by the whole thing.” Biafra said.  “That was when hippie meant activist, anti-war and causing the right kind of trouble, so I was totally down.” But as the hippies transformed to new age yuppies and Jello graduated from high school, the town was becoming less and less appealing. After a stint with some friends as the road crew for original Colorado punk band The Ravers, Biafra moved west, soon to start The Dead Kennedys, and Alternative Tentacles Records.

Alternative Tentacles began as the label name for the Dead Kennedys debut single “California Uber Alles.” Since then, the label has grown through 27 years and released over 350 recordings, almost all of which are made available on vinyl. In addition to musical artists such as Butthole Surfers, Blowfly, Slim Cessna’s Auto Club, and Lard, the label also features spoken word artists such as death row inmate Mumia Abu Jamal, Noam Chomsky, Howard Zinn, and Angela Davis.

“I’ve never made a dime on Alternative Tentacles. I’ve actually lost a lot of money over the years.” said Biafra. “I could be stashing away money on the stock market and counting beans and wondering where my life went, but I think the payback is all these amazing releases we’ve had on the label and all the bands we’ve been able to help.”

Biafra is an active member of the Green Party.  And although he has no plans to run for office in the near future, there is always a possibility.

“The campaign for mayor of San Francisco in 1979 was more or less on a spontaneous dare,” said Biafra. “And the Green Party nomination in 2000 was when some people at the New York State Green Convention threw my name in the hat for president and I got enough votes, so they asked me if I would run. I thought maybe if I left my name on the ballot it might inspire other people to get off their butts and register and show up and vote, and vote smart.”

Musically, Biafra has been playing with The Melvins, dubbed Jello Biafra With The Melvins, though often referred to as “The Jelvins.” They released their second album Sieg Howdy! in 2005, but have taken a short break from touring as The Melvins re-group, and as Jello launches his spoken word tour.

“Buzz (Osbourne, singer and guitarist for The Melvins) and I agreed it would just be taking on too much and would come off half-assed and not as tight and firey as it ought to be,” Biafra said.  “Hopefully we’ll be able to pick that back up next year and finally do a Denver show.”

Jello recently finished up his eighth spoken word album In the Grip of Official Treason, released October 26. Along with live recordings from the tour that followed 2002’s release of Machine Gun in the Clown’s Hand, the album also includes performances from the Punk Voter Tour. To name a few, the subjects range from buried facts about the Iraq war, a visit to post-Katrina New Orleans, the Green Party, and voter fraud disease. Biafra also updates his classic “Die for Oil Sucker” and includes an expanded version of the Ministry song “Ass Clown.”

“I don’t know what I’m going to do next. I just finished this spoken word album and we are in what still passes for an election year in this country,” Biafra said. “I’m sticking with the Greens.  I would rather vote for something or someone I want and not get it, than vote for something I don’t want and get it.”

Alternative Tentacles Records Boulder Jello Biafra The Dead Kennedys The Ravers
Cool, Share this article: Twitter Facebook Google+ Pinterest LinkedIn Tumblr Email
Previous ArticleBen Lee wakes up positive with success of his album at home and in the States
Next Article Panic! At The Disco blows up but still can’t get out of Fall Out Boy’s shadow