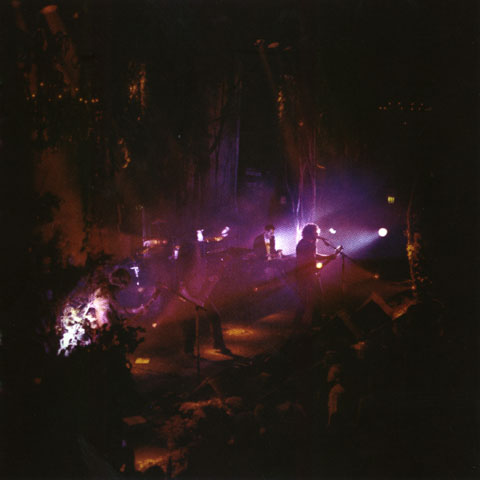 The phrase “best live band” is tossed around with reckless abandon these days, to the point where bands who should never be called the best at anything, except maybe sucking, end up getting kudos.

But anyone who doubts that the title should be given to My Morning Jacket need only listen to a few minutes of the band’s new double live CD and the accompanying DVD Okonokos.

The show was recorded at the legendary Fillmore West in San Francisco, but the band doesn’t seem to care about that. In fact, it takes some sleuth work to find out anything about the actual date of the show (I won’t ruin the surprise. I’ll let you search for it on your own). “We didn’t want to do My Morning Jacket: Live at The Fillmore, or Live at Shepherd’s Bush. We wanted to make it mysterious; it’s not about a time or a place. It’s about us playing music, somewhere,” said the band’s captain, Jim James, who writes all of the Jacket’s songs and is also the creator of the concept that goes along with the DVD.

The requests for a live release from My Morning Jacket have been plentiful since the band first started to pick up steam, but James said that it took some time for them to feel comfortable about putting out such a personal portrait of themselves. “People have always been asking us for a live record and we’ve always wanted to put one out, but we never really felt the time was right,” James said. “We thought about putting one out a while back but then Johnny and Danny (Quaid and Cash, guitarist and pianist as well as founding members) quit the band. Carl (Broemel) and Bo (Koster) joined, and we wanted to wait a while, until they felt they’d settled in. A couple of years later, we’re really feeling good and we’re in a positive place, and we sound better than ever. We decided to go for it.”

That may seem semi-cocky to say, but the band does in fact sound better than ever and Okonokos  is the perfect example. The show goes through material from all of the Jacket’s releases and while the performance may not be as letter-perfect as the studio versions, it’s still better than most bands could hope for on their best nights.

James’ vocals are brilliant. Broemel’s guitar work is truly opulent and arresting, and drummer Patrick Hallahan comes across as one of the best rock and roll drummers since John Bonham (his opening ride on the high-hat on the anthematic song “One Big Holiday” is worth the CD and DVD alone).

So, the next time someone calls a band the “best live band in America” make sure that they’re talking about My Morning Jacket, or else call them out on being a liar.

I just don’t get it. Shooter Jennings shows are fantastic, a tremendous blend of paying homage to his legendary country pedigree, and a rock show all his own. But Jennings’ albums have never sat right with me. I find them trite, way over-produced and somewhat uninspired. So, when I learned that the son of the great Waylon Jennings was to release his first live album, I was pumped thinking that I’d finally hit my own personal paydirt. But once again, I was left disappointed. Shooter Jennings Live at Irving Plaza is incredibly well done, don’t get me wrong. Featuring a blend of songs from his debut release Put the O Back in Country and his newest disc, released earlier this year, Electric Rodeo, Live at Irving Plaza shines with tracks like “Gone to Carolina” and “Southern Comfort,” but all-in-all it doesn’t seem to hold any magic. I guess live and in person is still the way to go with Shooter.

If We Can’t Escape My Pretty

It’s so amazing when it all clicks right, and the IV Thieves are clicking perfectly. The band started out as Nic Armstrong and the Thieves, but when they toured, the band found its individuality and discovered that it worked best as a cohesive unit and not as a back-up band to Armstrong. The four members (Armstrong included) have learned to work together and each one of the four separate Thieves share duties of writing and singing on on If We Can’t Escape My Pretty. The band’s sound is autobiographical. The group originally formed in Nottingham, England, a working-class crime-infested area. They have since moved to Austin, Texas. Those two geographical references perfectly surmise the band — British working-class pop, fused with American fuzed out rock. Think Gomez meets Ryan Adams’ Cardinals.

Wofford and his Hi-Beams shine brilliantly

A lot of Colorado bands have recently embraced twang. But while those bands have flirted with it, Halden Wofford and the Hi Beams have ravished it, devoured it and knocked it up. Wofford and crew’s blend of hardcore honky-tonk could easily fall flat if it came from the wrong source, but the band’s sophomore release proves that these aren’t some kids having fun with the next catchy sound. It’s as genuine as industrial beer and damn near as tasty. If you’ve gravitated to any alt-country, you owe it to yourself to try these guys on for size, and see if you’re a true honky-tonker.

It’s absolutely amazing, the different hats some people can wear so well.

Morten Storgaard is a perfect example. His new self-titled EP (a prelude to his full-length due in January) is an exquisite piece of singer/songwriter/folk in the James Blunt-type realm. With odd guitar tunings and delicate lyrics, he conveys his stories in an honest, heartfelt approach. He also accompanies himself on trumpet, which ads a miraculous depth to his songs. But what’s really surprising about this, is that Storgaard’s background is based around the Danish hardcore metal band Barricades. None of that can be heard or witnessed through this new release, though, which is as familiar and comfortable as an old, old friend with great stories. Well done.

Lyrics Born is the shit! He’s gone from performing in underground clubs to taking on enormous crowds all over the world, and crossing over into audiences far from the normal hip-hop realm (some of his recent shows include Coachella, Lollapalooza, Vegoose, Bonnaroo, Langerado and Australia’s Good Vibe festival).

His new live CD, recorded in Australia, easily demonstrates why he’s gotten so popular, and why he appeals to so many different facets of people. From his politically infused “Stop Complaining” to his house-party anthems like “Do That There Melody,” the disc is a blast and can’t help but put you in a good mood. Not many hip-hop artists release live albums, and the few who have tried have often fallen short, but Lyrics Born has pulled it off wonderfully.

In 2001, The String Cheese Incident was just starting to blow up as Boulder’s jam scene spread across the country. But as String Cheese took flight, T.V. appearances were few and far between, since few could give them the chance to explore their music. Enter Austin City Limits.

On July 24, 2001, String Cheese performed a full set on the show, and the result is this DVD. For rabid fans this is a great look back on the band in its early hey day, but it is five years old now, so if you’re not a fan of the band, this probably won’t be the thing that brings you in. Collectors, however, are going to love being able to add this to their stacks of live recordings.