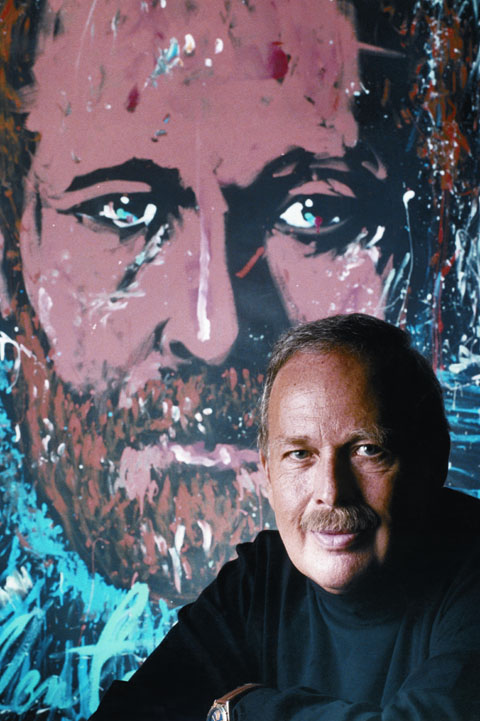 It was reported Sunday, April 28 that Barry Fey, the legendary concert promoter that put Denver on the musical map, died. He was 73. The cause of death was not immediately known, but Fey had recently been recovering from surgery.

This is an industry profile and interview that was conducted in 2006 with Fey, even before his book Backstage Past, which was finally published in 2011.

There was once an era when big concerts weren’t ruled by big corporations. It was a time when a man in his late twenties could come to town and make a living and a legacy for himself by bringing talent to the area, and in the late 1960s that’s exactly what a young man from New York City named Barry Fey did here in Denver.

Fey is a legend among promoters, a mensch among musicians and a God-like figure to audiences of his shows, who knew that whether it was Mick Jagger or Joe Schmo on stage, he always cared about the fans, more than he did the artists.

Fey got into the music business “completely by accident” when he booked Baby Huey and the Babysitters (an act that he described as “more Stevie Wonder than Stevie Wonder”) to play a gig at the American Legion Hall in Rockford, Ill. on Easter Sunday in 1965. Fey made $92 that night and days later quit his job to start his career as a promoter.

He is credited with booking the first U.S. tour date for a then-relatively unknown British band, Led Zeppelin. While he was still in office, President Clinton honored Fey, saying that he had done so well in entertainment that he could have had a great career as a politician. Fey is responsible for helping to save the Colorado Symphony. He put together an old-timers baseball game in 1983, which was meant to promote the possibility of bringing Major League Baseball to Denver. He’s had a street named after him in Denver and, most notably, he was the man responsible in the 1980s for helping the United States learn about an upcoming Irish band called U2 — a relationship that is still close to this day, so much so that when Fey fell ill years ago he was visited by Bono and company in his hospital room.

He was also known as an extravagant hot head who never backed down from anyone. He was a man that was as loud and tempestuous as his rock shows. It is rumored that he once pulled a gun on Axl Rose, when Rose tried to leave the stage during a Denver Guns ‘N’ Roses show (Fey said he was in fact packing a .357 with him, but that he never actually pulled it). And there is the comedically legendary story about the telephone repair man, who one day was outside Fey’s office when a phone flew out the window and landed at his feet. The repairman returned to Fey’s office daily for the next several weeks, checking to see if the company needed new phones.

These days, Fey, who has retired several times, the last of which was in December, 2003, is calmer, more modest and humbled by the way the people of Denver still treat him. He continually claims that he is “no longer relevant” to the scene, but Fey helped build the Colorado music scene and saying that he isn’t relevant is like saying that Elvis became irrelevant as soon as the Rolling Stones formed.

Marquee: What was the first concert you saw?

Fey: Chad Mitchell Trio at Houston Hall at the University of Pennsylvania.

Marquee: First album you ever purchased?

Fey: Peter, Paul and Mary at Carnegie Hall (and it was an album, not a CD).

Marquee: What are you listening to today?

Fey: Nothing. I can’t listen to music because the state of the music business today has no life, no soul. That’s how passionate I am about it. I don’t even go to concerts unless I am specifically invited. I listen to talk radio now, exclusively.

Marquee: How did you start Feyline Productions?

Fey: I had been booking shows with Ed Weimer, and when it came time to settle on a Paul Revere and the Raiders show, he told me he couldn’t pay me. So I picked up my stuff and left. He told me that if I left I’d be a schlock for the rest of my life, and I said “Ed, wherever I work, whatever I do, if I earn it it’ll be mine and I’ll get it. I walked out of the office, and this is what a lucky mother-fucker I am. I had a copy of Billboard in my hand and the front page story was that the Family Dog in San Francisco was looking for tapes of bands. There was a band that I had been booking at fraternity houses called Eighth Penny Matter. I took a tape to San Francisco and I went into their offices the week before the Monterey Pop Festival. So I go in in my blue blazer and button-down blue shirt and pumpkin and blue tie, grey slacks and penny loafers with no socks (very U. of Penn.) and there are all these guys walking around with bear skin rugs for clothes. I went in to meet Chet Helms and he’s sitting on the floor in the lotus position with a blotter in front of him with a vase and flower. I played him and Bob Cohn the tape, and they liked it and invited me to the Avalon Ballroom that night. I never saw anything like it. It was like being dropped into Wild Kingdom. When I got home I started what developed into a habit. I put on Scott McKenzie’s “San Francisco” and I played it over and over. I used to do that years later when a big show would come through, I play their music over and over and get pumped up for it.

So then, I found out that The Bird had gone out of business and I had the opportunity to bring shows there. So I called up San Francisco to talk to Bob (Cohen) and asked him if he would like to bring the Family Dog to Denver. He flew out the next day (as busy as he was) and this was in June, but by September 8, 1967 we opened with Big Brother and the Holding Company, Blue Cheer, and Eighth Penny Matter to pay them back for the memories.

We started doing a lot of shows with Family Dog booking the big acts and me booking the local talent. I went to buy radio time for one of the first shows, the Doors, and I was going to name my company Feline. You know, cat and dog? I wanted that association with Family Dog. But when the radio guy looked at the copy for the ad, he thought we had left off a “Y” and he added it in. It came out as Feyline Presents and I’m so superstitious, I never changed it. The Doors, of course sold out. See what I’m saying, it’s all bullshit. All the planning in the world couldn’t do that.

Fey: I had grown up in New York and Chicago so I didn’t need a car, but I was afraid. I didn’t think I could do it. I have the upmost confidence in what I do, but if I don’t think I can do it, I don’t even try. I’m very scared of failure. It’s kind of an asshole way to do things in life.

Marquee: How can you say you’re afraid of failure, when you’re a gambler and your business is a gamble. I mean I read a story about you and U2 walking through Vegas and you telling the guys in the band which tables to play and which ones to stay away from.

Fey: ’Cause I’m good at it and I’m lucky. I mean, how many people spend millions of dollars on horses and never succeed. I bought one horse (Reraise) and it won the Breeder’s Cup. I’ve had some bad luck too, though, but nothing compared to the good. You can’t have 35 incredible years and bitch about the three or four bad ones. Most of my bad luck, though, was brought on by my own carelessness with money. I could show you stacks of stocks that I have that are worthless. Not that they’ve gone down, but are truly worthless.

Marquee: You were in the Marines for two years, what did that do to shape who you are?

Fey: I wouldn’t be sitting here talking to you if I hadn’t gone to the Marines. My father died the week before I graduated high school, so I couldn’t afford to go to college and so I joined the Marines. When I got out of there I knew ‘ain’t nothing going to happen to me.’ I had nowhere to go but up.

Marquee: What do you think of all the shake-ups going on right now in the business, locally?

Fey: I don’t get it. Brent (Fedrizzi), (Don) Strasburg, Bill Bass, Jesse Morale, Chuck Morris, they all worked for me. I have a pretty good alumni association. I don’t understand what’s going on with all of the changes, but it’s not up to me to understand. There must be something below the surface, though, because Clear Channel has an exclusive deal with the Pepsi Center, they have another four years on their Paramount deal, they have the Fillmore and if the Justice Department lets them buy House of Blues, they’ll have Fiddler’s Green too. AEG doesn’t have any real estate.

Marquee: You mentioned that in this day and age, you could have never been who you are. What do you mean by that?

Fey: Barry Fey couldn’t be Barry Fey these days. There isn’t a next Barry Fey. That time is done. Even if Clear Channel and AEG disappeared right now, a new promoter would have a hell of a time because the bands are used to the big money now. Ticket prices are absurd. People should stop going. That would help the revolution go the other way. It’s easy for me to say now, but I really don’t think I could charge those prices with a straight face. When we did the Stones in 1973, we charged $6.50 a ticket. With inflation and everything that today is $29.72. The Stones are charging $350. How do you get from $29 to $350? Greed. There is no high road anymore.

Marquee: Do you miss it?

Fey: No. Wait. Miss what it used to be or what’s going on now?

Marquee: Do you miss being in the scene?

Fey: No. I couldn’t stand being in the scene. It’s like if I designed the World Trade Center and someone goes and blows it up. I wouldn’t want to go back and stand there. In other words, they blew up my business. I helped build it, but it’s gone. If it were the way it used to be I’d love it, but it’s not and it’s really sad. That sounds like sour grapes. But it’s not. There’s just no memories anymore.