Trending Stories from The Marquee
You are at:Home»Features»Panic! At The Disco blows up but still can’t get out of Fall Out Boy’s shadow
By Marquee Magazine on November 1, 2006 Features, Interviews, Page Bayless 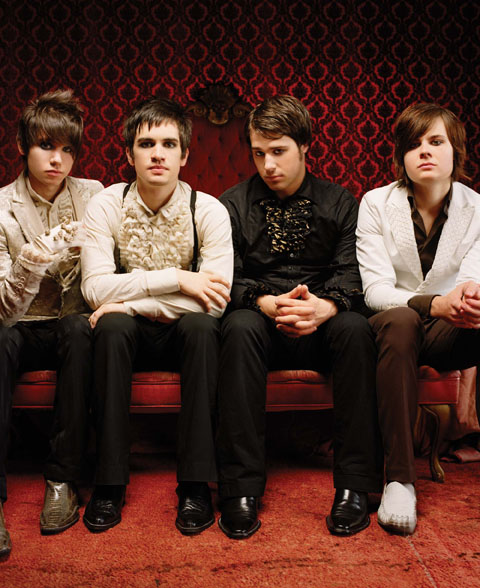 Love them or hate them, you can’t deny Panic! At the Disco of their big-deal status (or, should I say the biggest deal). Their debut album, A Fever You Can’t Sweat Out, went platinum within a week of its release and has catapulted the foursome to an icon status that is unheard of from a band that has only been playing together for two years. After a sold-out North American tour and five MTV Video Music Award nominations, Panic! At The Disco has made quite a mark on the music scene. If you think otherwise, try listening to their hit song “I Write Sins Not Tragedies” without re-playing “the poor groom’s bride is a whore” in your head all day long … and liking it.

Straight out of a Las Vegas Catholic high school, Ryan Ross, Brandon Urie, Brent Wilson and Spencer Smith have skipped the more traditional steps common to most bands, and the public won’t let them forget it. Any press about Panic! immediately addresses their connection to Pete Wentz and Fall Out Boy. Taking a shot in the dark, the boys posted their music on Wentz’s Livejournal and were shocked at his almost immediate interest. The triumph that ensued has been exhausted in countless articles and is now an integral part of the band’s image. With good reason, too: such random luck in this business is unprecedented. Yet, as Panic!’s popularity swells, people will be forced to see them as unique and successful without the Fall Out Boy filter.

It is only normal that questions circulate when a suddenly successful band has had such a brief history together, but Panic! isn’t phased by the constant reminder that they had it easy. When the boys set out to make their album, playing shows along the way was a path they avoided. They chose to focus on one solid album, continuously reworking each song until they were satisfied.

Singer/keyboardist Brandon Urie has no regrets. “We are perfectionists,” Urie said in an interview with The Marquee. “The songs on the album are the only songs we’ve ever written and we’ve worked the hell out of them.” Urie is convinced that Panic! would have created the same album regardless of the band’s time together.

Amidst the chaos of the past year, the group’s goals have stayed genuine. At a time when instant fame is constantly creating yet another flash in the pan, Panic! At The Disco has proved it may have legitimate staying power. Urie, given the circumstances, is refreshingly down to earth: he finds their new-found fame “surreal and shocking.”

To many young musicians, the status that Panic! has reached is the end-all-be-all of musical success. Luckily, Urie and the other boys aren’t fooled by their explosive fame. They have made it clear that, regardless of what has happened or what the future holds, they will stick with what they know. “We’re going to keep writing music that’s interesting to us, that’s what got us started in the first place,” Urie said.

Keeping with the theme of new and interesting, Panic! At The Disco has also created a suitable aesthetic that coincides with their music, and somehow the eyeliner and skinny jeans just work. Their sense of style is characteristic of a Vegas show, yet Urie claims that “Vegas wasn’t huge” in determining that style. The simple notion of showmanship and a desire to give something extra to a live show is what inspires their look, he said.

In terms of raw talent and the execution of that talent, most performers can only emphasize one aspect, neglecting the other. Panic! At The Disco, however, has fused real talent with an attitude that each show is an occasion.

This type of “occasion” is exactly what has brought the band to the public’s attention. Their first music video, for “I Write Sins Not Tragedies,” personified the ideal circus vibe the band communicates through their songs. Art director Shane C. Drake, who had previously worked with (you guessed it) Fall Out Boy, helped give Panic! an appropriate video that painted a perfect picture of the album. The boys and Drake met together and discussed options for the debut video. “He was drinking and we were just throwing out ideas, so many things popped up that we were really psyched about,” Urie said.

Panic! At The Disco has surpassed everyone’s expectations, whether they are under the shadow of Fall Out Boy or not. All things aside, the boys have a talent that will continue to be recognized and appreciated, whether or not Pete Wentz is holding their hands.

The band has a mindset that gets you far in this business and that is refreshing for such a young age: “It’s only the beginning for us, even if everything ends for us next year, success-wise,” Urie said.