Trending Stories from The Marquee
You are at:Home»Features»Polytoxic takes one last lap around the stage with final Last Waltz performance
By Marquee Magazine on November 1, 2006 Features, Interviews, Timothy Dwenger 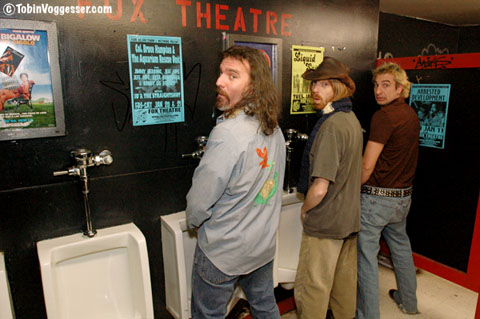 Thirty years ago this month one of the most storied concerts in popular music history occurred in San Francisco.

The Band performed their final concert (with the original line-up) on Thanksgiving Day, 1976 at the famed Winterland. The evening featured dinner, ballroom dancing and nearly four hours of music from the guests of honor and several of their close friends.

The evening was documented by filmmaking genius Martin Scorsese and was released two years later as the concert film The Last Waltz.  Scorsese managed to capture The Band in all their glory and the film has stood up to this day as one of the best concert films ever made.

Nearly a year-and-a-half ago Polytoxic took to the stage at Dulcinea’s 100th Monkey in Denver in an attempt to recreate the fabled evening. The production was such a huge success that they scheduled an encore performance a couple of months later on the night before Thanksgiving at Cervantes. “They packed in about 900 people that night and I think the official capacity there is 750,” said CR Gruver (keyboards) in a recent interview with The Marquee.

That second performance was heralded as 2005’s Best Local Concert of the Year by Westword.

Polytoxic was a part of the Denver music scene for two years until they recently disbanded, performing their final show at the new Soiled Dove Underground this past September.  “It was a great show,” said Gruver. “A sold-out crowd in one of the best sounding rooms in town. It was a treat to play there for our last official show.”

Gruver has recently relocated to his fiancés home city of New Orleans and seems very excited about the musical possibilities the city offers.  “I came down to New Orleans because it is probably one of the best music towns in the country. I want to try to meet some of the big hitters and just immerse myself in the music scene,” said Gruver. “Last night we went to see The Rebirth Brass Band and I got to hang out with Ivan Neville for a little while. It is an amazing opportunity for me down here.”

While Polytoxic no longer formally exists, Gruver does allow for the possibility that this year’s Thanksgiving performance many not in fact be Polytoxic’s final performance of The Last Waltz. “We have talked about doing it every year because I would love to be able to be in Denver for Thanksgiving and get to see old friends and stuff,” Gruver said. “But for now we are considering it ‘the last waltz’ for Polytoxic.”

In much the same fashion as the original event 30 years ago, Polytoxic has structured the evening to involve nearly 30 musicians in creating their version of the concert. “One of the show stoppers of the evening is Aaron Rose, who sings ‘Dry Your Eyes,’ the Neil Diamond song. We also have Jessica Goodkin, who sings that Van Morrison song ‘Caravan,’ which is phenomenal. Our friend Christy Chambers does Joni Mitchell’s ‘Coyote’ and Cheyenne Kowal from the Reals comes out and does ‘Evangeline.’ No one is better than the person before them and they are just stellar. It makes for a pretty amazing night,” said Gruver.

While Gruver does admit that they don’t play the songs in the same order as either the original concert or the film, they do cover most of the same material.

Polytoxic may not have the budget that Scorsese and The Band did, but Gruver promises they are going to dress the place up a bit. “Last year we had these huge velvet curtains that hung behind the stage and that gave it a little bit of a classy feel. We also had candelabras up on stage with real candles and real flame and everything.  We try to be as authentic to the original event as we can afford to be,” he laughed.

The Last Waltz is a milestone in American musical history. The Band went out on top and they threw themselves one hell of a party. Scorsese did it justice, but there can be no substitute for seeing a concert in person. So, unless you can figure out a way to travel back in time to 1976, this re-creation of the evening will have to do.