Trending Stories from The Marquee
You are at:Home»Features»Rachel Fuller’s ‘In the Attic’ satellite radio show on tour with the Who
By Marquee Magazine on November 1, 2006 Features, Interviews, LJ Hammer 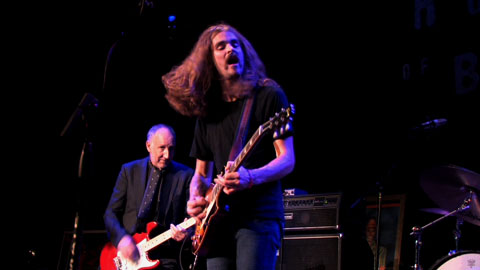 Some people know her as supermodel Jerry Hall’s catty best friend on “Kept” (you know, the VH-1 reality show where Mick Jagger’s ex spent a few months toying with 12 handsome young men who were competing for the opportunity to live the highlife as a “kept” man). Her fan base knows her as a talented pianist, vocalist, and composer. Sirius radio listeners, who are Who fans, know her as the Backstage B**ch on Sirius’ dedicated Who Channel. Others know her from her no-holds-barred online music chat show, “In The Attic.” Some know her from her lively blog. And finally, many folks know her as Pete Townshend’s long-time girlfriend and partner.

Wherever you might know her from, one thing is for sure – Rachel Fuller is savvy, she’s talented, she’s witty, and she’s a good bit of fun, whichever one of her always fashionable hats she might be wearing!

The Marquee had the pleasure of sitting down with Fuller in her (and Townshend’s) New York City hotel room in September, where they were home-based for the northeast leg of The Who’s U.S. tour. The Who will play through Colorado at the Pepsi Center on November 14th, with support from The Pretenders.

Foremost on Fuller’s mind was “In The Attic”   (ITA) her informal music chat show that’s broadcast on the internet at www.intheattic.tv. Initially, it was something that Fuller and her college chum and fellow musician, Mikey Cuthbert, started doing a year ago out of Townshend’s home studio in London.

“We met in college together when we were like 15. He played guitar, and I played piano. We became friends. We hung out and jammed together. Then when we were about 17 or 18, he got kicked out of his house. He turned up on my doorstep with a black bag, and he came and lived in my attic,” said Fuller. (Hence, In The Attic.)

Simon is not only the second guitarist and backing vocalist on tour with The Who, but is also a founding member of the band Casbah Club, along with Bruce Foxton of The Jam and Mark Brzezicki of Big Country.

In the early stages, watching an “In The Attic” webcast was like being a fly on Townshend and Fuller’s living room wall. The four of them would play all sorts of music, and they’d chat about everything from fashion tips (Fuller’s a big shopper) to music to gossip to Townshend telling gems of Who stories. Occasionally, they’d have guest musicians pop in, including Martha Wainwright, Foy Vance, Chris Difford, and Roger Daltrey.

However, what started in September of 2005 as an informal, once a week (or so) escapade, soon became a massive undertaking.

Over the summer, The Who embarked upon their most extensive European tour in over 25 years. At Townshend’s request, the “In The Attic” team took their show on the road, broadcasting 23 shows out of the back of a 34-foot Airstream caravan (we call them trailers, or RVs, here in the States).

“In Europe, we had the caravan, which was driveable, so every Who show, we would do (an ITA) show before. That went really well,” Fuller said.

In addition to the core team of Fuller, Cuthbert and the Townshend brothers, ITA webcast exclusive clips of the previous day’s Who show, and with so many festival dates, also had a steady stream of guests, including: artist Sir Peter Blake, The Editors, The Kooks, Boulder’s own Rose Hill Drive (twice!), Kazabian, The Eels, Shack, The Flaming Lips, and Tracey Ullman.

With a decision already made to discontinue the broadcasting of Who segments on ITA (long story about Townshend and Who frontman Roger Daltrey not seeing eye to eye), since coming to the States in September ITA has encountered some unexpected snags.

“Over here (in the U.S.), we couldn’t bring the caravan,” said Fuller. “Then we had this idea that we would do the show from our hotel room, but then we found out that you can’t do that. You can’t do webcasting or TV from hotels. It’s illegal. So I decided to set up the Attic Intravision site (www.intheattic.tv). We decided that even if we couldn’t do them live, we could do a few shows here in America and upload them directly on to the site.”

So far, there have been two ITA broadcasts from the States (with visits from David Bowie, Jack White’s Raconteurs, and The Flaming Lips), and two live Attic Jam concerts, one of which featured Rose Hill Drive. “They’re great,” Fuller said. “They’re really young, but they’re great guys.”

It will be interesting to see where ITA goes from here. In the meantime, Rachel’s been doing Barnes and Noble in-store appearances, accompanied by her “old man.”

And in order to gear up for the impending Who show at the Pepsi Center, Sirius 24/7 Who Channel, where Fuller serves as their official Backstage B**ch, offers a steady stream of Who, both well known and obscure, exclusive interviews and live concerts.

In The Attic Pete Townshend Rachel Fuller Sirius The Who
Cool, Share this article: Twitter Facebook Google+ Pinterest LinkedIn Tumblr Email
Previous ArticleSonnenblume’s members find a common love for space-rock sound
Next Article Ben Lee wakes up positive with success of his album at home and in the States