Trending Stories from The Marquee
You are at:Home»Features»Sonnenblume’s members find a common love for space-rock sound
By Marquee Magazine on November 1, 2006 Features, Interviews, Tiffany Childs 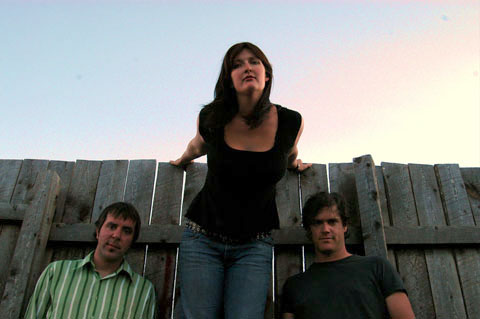 Sonnenblume brings a certain something to the genre of space rock that few bands have — a chick that actually rocks.

Liz Forster, who plays bass and sings, met guitarist Todd Ayers 13 years ago when they both worked at Robb’s Music in Boulder. Forster ran into Ayers again at Immersive Studios years later.  “I kept saying, you [Todd] and I should record something together, but he just brushed me off,” Forster said laughingly in a recent full-band interview with The Marquee. “Finally, he heard me singing on a mutual friend’s album and everything changed.”

They got together as a duo soon after.

Eventually, Forster and Ayers decided to move out of the studio and put together a live space-rock band. The only problem was finding a drummer. “I thought we knew all the drummers in town,” Forster said. “Luckily we didn’t, because Zack [Littlefield] came in and just kind of knew the sound and even our songs better than we did. He really added a lot to the band.”

Although the trio has just recently formed, the musicians themselves are no strangers to the scene. Forster has been a singer/songwriter since the ’90s, often working alone until joining Ayers. “In the ’90s, there weren’t a lot of options for girls other than being a singer/songwriter, unless you were Blondie,” said Forster. “Then I heard an album by Space Team Electra that completely changed my life.”

Oddly enough, her future partner Ayers was a founding member of Space Team Electra. In bands since college, Ayers played many genres, but was really interested in “bands with a dark, droney, powerfully dynamic kind of sound.” Influenced greatly by Twice Wilted — he played with the group in one of its later versions — Ayers formed bands such as Volplane and Space Team Electra, looking to create that textural background of sound that he so loved listening to.

Littlefield found himself in a similar space as well. “I’ve been involved in so many genres of music, from afro-cuban, which I studied for 10 years, to bluegrass, which I grew up with. I’ve always wanted to play in a band that played the kind of music I listened to,” he said. “The closest I came before Sonnenblume was with this band where we dressed as robots and threw toast at the audience. But, I’m doing it now and I haven’t played with anybody who has this unique kind of sound. I love it.”

That sound pulls from a musical background that ranges from jazz to funk to folk, a sound that is indeed unique. Sonnenblume is a darker, kind of melancholy music juxtaposed with an emotionally strong female voice. There is a possibility for it to be abrasive, but somehow Sonnenblume strikes a perfect balance. It is material that encourages the listener to contemplatively rock out.

Now that the band members have found each other they have some modest desires. “We’d like to take over the world,” Ayers proclaimed with a wry grin.

Actually, they seem decidedly down-to-earth as they talk about future plans. “We’re excited to gauge how our music is being perceived,” Littlefield said, with Ayers adding, “Our reward right now is just to be able to play music we enjoy playing for people who like to hear what we’re doing.” Forster further explained that there is an EP in the works. When pressed, she mentioned the goal is to have it out by the end of the year, but she stressed, “We are focused on putting out something that is good, not just getting something out there. We will be writing songs continuously, but with the medium changing we don’t feel albums are as necessary as they once were.”

Sonnenblume plans on recording their EP at The Rock Box which, fortunately, is located in Littlefield’s home, with Ayers producing most of it. As they see it, it’s a win-win situation. “We aren’t pressed for time this way, worrying about how much we’re spending every hour there and just trying to get it done,” Littlefield said.