Trending Stories from The Marquee
You are at:Home»Cover Story»The Decemberists sign to Capitol and release the gifted Crane Wife
By Marquee Magazine on November 1, 2006 Cover Story, Features, Interviews, Timothy Dwenger 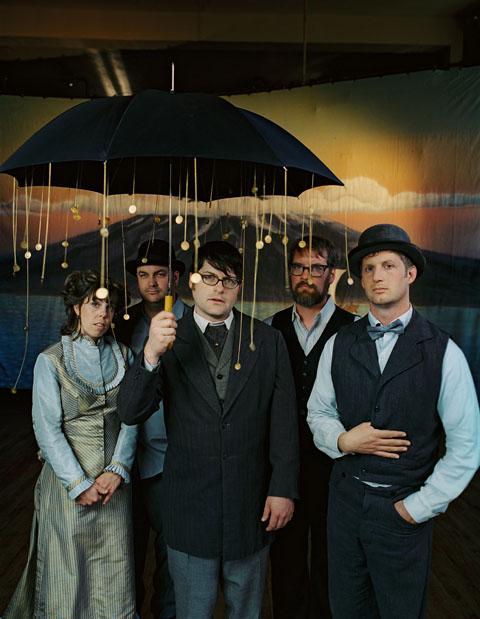 Colin Meloy of The Decemberists has recently had some significant and wonderful changes take place in his life. First, as 2005 drew to a close his band, The Decemberists, took the plunge and signed to Capitol Records. Then, in February of this year, Meloy’s long-time girl-friend, and the one responsible for The Decemberists album art, Carson Ellis gave birth to the couple’s first child, a healthy baby boy.

“It has irrevocably changed my life, but in a good way. It is really exciting and every day is brand new. There are always new and exciting and terrifying things to deal with, so I am really enjoying it so far,” said Meloy in a recent interview with The Marquee from his home in Portland, Oregon, as he geared up for his first major tour since he became a father. “We did a week and a half in Europe in the spring, and a couple of one-off shows but nothing you could really call a full-on tour since Henry was born.”

Meloy recently spawned another, somewhat less significant, creation. On October 3 The Decemberists unveiled their major label debut for Capitol, a masterpiece called The Crane Wife. The album once again features Meloy’s elegant wordsmithing as it musically showcases the maturity of the band. The experience begins with a sound Decemberists fans will recognize and builds to a three-song crescendo that is one part disco/funk, one part prog-rock and one part the gorgeous orchestral indie-rock that the band has become known for.

The powerful, nearly epic songs on this record highlight the fact that Meloy’s songwriting is clearly at the top of its game. He seems to have almost painted the word pictures that bring this album to life. Images such as “I tasted summer on your peppery skin” and “A gray sky, a bitter sting, a rain cloud, a crane on a wing” are not uncommon lines in these dark Victorian tales.

“Most of the songs on The Crane Wife were written while Carson was pregnant and while I was fully considering the implications of being a father. What came out was really dark for whatever reason,” chuckled Meloy. “I don’t really have any explanation for that.”

Technically speaking, the production value on the new record is excellent and the song list was put together flawlessly. The album lifts you up in strong arms and lets you down gently right where it wants you. From the bright and tinny opening notes of “The Crane Wife 3” through the final chorus of “Sons and Daughters,” which features the full company singing “Hear all the bombs, they fade away,” The Decemberists take you for an emotionally wrenching ride through an imaginary world inhabited by soldiers and sailors, bank robbers and fairy tale butchers. It is not a place for the faint of heart.

There has recently been buzz among long-time Decemberists fans that the band has “sold out.”  While they have moved on and now find themselves on a major label, the majesty and passion that are conveyed in the presentation of this collection of songs simply could not have been made by a band attempting to placate a record executive.  This is a record that reflects the maturity of the band both lyrically and musically. “We have really mined the talents of all the band members on this record,” said Meloy. “Capitol didn’t go after us because they expected us to be their next #1 hit machine. The conditions of us signing a major label contract were really that we retain all creative control over every aspect of the band. They have been very supportive of that.”

In fact, Meloy stressed that the support that Capitol has put behind The Decemberists enabled them to make The Crane Wife exactly the record they wanted it to be. “There were really no compromises that needed to be made. We had the freedom and, more importantly, the time to go back and scrap things and start again if we needed to. We were really able to take all the time we needed to make the record,” said Meloy.

The musical centerpiece of the album comes in the form of a 12-and-a-half-minute prog-rock suite of three songs called “The Island.” “The instrumental intro to ‘The Island’ had initially been written and I demoed it in a much heavier, electric, Sabbathy way. We recorded it that way and started working on overdubbing and when we listened to it we felt that where the rest of the song had a lot of life and spark to it, the intro felt so derivative that it had no soul. We tore it down and really had to trust our intuition as we went back in to the studio and recorded it acoustically and started building from there. Eventually we came up with what is on the album,” said Meloy.

Meloy went on to explain that the three songs that make up “The Island” are connected musically, but not thematically. “I think of it as three separate stories,” he said. “‘Come and See’ is a utopic vision of escapism; this island in the wild left to its own resources. ‘The Landlord’s Daughter’ is obviously a tale about rape and murder. I was following more traditional approaches to writing a folk ballad on that one. The third piece, ‘You’ll Not Feel The Drowning,’ was a line borrowed from In Patagonia by Bruce Chatwin, where a young boy is told to go to sleep as the ship he is sailing on is engulfed by a squall. The reason he is given is that if he is asleep he won’t feel the drowning.”

While Meloy obviously has an active imagination, he is not afraid to borrow from works of literature to jump start his creative flow. In Patagonia is not the only example of a literary inspiration found on the album. The title track itself is a reworking of a classic Japanese folk tale and Meloy isn’t afraid to admit that he finds inspiration in literature. Much has been made of the seafaring themes of many of The Decemberists songs. Meloy is quick to own up to the fact that “I didn’t have the opportunity to sail much as a child and I have gleaned much of my nautical vocabulary from Patrick O’Brien novels and other maritime tales.”

Meloy is obviously a craftsman who gives credit to his tools where it is due but on this album it becomes clear that without his band he would just be another songwriter, albeit a very good one.  While The Decemberists fit into a very rare category musically, they also fit into another very rare category, a category that is defined by bands that rise to popularity simply because they are extremely talented and are hitting their creative stride as a unit, not as individuals. The nature of creativity almost dictates that this can’t last and that it must be cherished when it happens. The Decemberists are at that pinnacle right now. We would be fools not to stand up and take notice while they are in our midst.