Trending Stories from The Marquee
You are at:Home»Features»The Life There is embraces band members differences to create a fresh, unique sound
By Marquee Magazine on November 1, 2006 Features, Interviews, Marisa Beahm 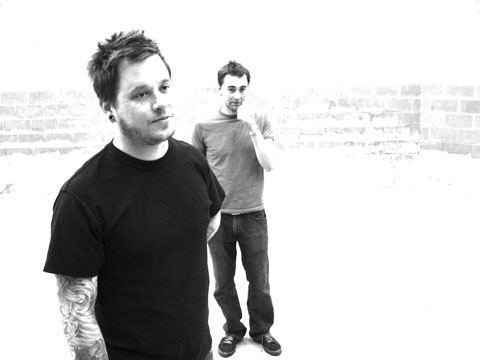 Most bands consider bringing together like-minded musicians the best way to make music.

But the members of The Life There Is don’t buy into that. Instead of a group with identical musical palates, the innovative Boulder-based band is comprised of musicians with dissimilar tastes and backgrounds, which is their recipe for a fresh musical style.

The Life There Is generates a unique sound with an electronica foundation intermingled with subtle touches of pedal steel guitar and dark, emotive lyrics.

“We are trying to make something that’s not three years out of date. It comes down to everyone is different and has a different style,” said bassist and beat sampler Jim Cleveland in a recent interview with The Marquee. “We are not better than anybody by any means, but we aren’t following a formula. There are a lot of bands that are good in Denver. There are a lot of good artists, but there are some who are falling into patterns,” he said.

At first glance, it would seem difficult to blend band members’ individual influences and backgrounds into fluid songs. Vocalist and guitar player Eric Larson, from Atlanta, enjoys Jeff Buckley, Elliot Smith and Thom Yorke. Austin Keeble, the drummer, who is also from Atlanta, likes Mastodon, Gene Kruper and Ludacris. As if that were not enough of a musical mix, pedal steel guitar player Travis Rosenburg, of Nashville, draws influence from The Flaming Lips and classic country like Willie Nelson, Johnny Cash and Hank Williams. And lastly, Cleveland, of Chicago, who juggles an MPC-2000 synthesizer, three keyboards and a bass on stage, enjoys Mike Patton and DJ Shadow.

But instead of colliding into a musical disaster, the opposite effect occurs. The music of The Life  There Is is engaging, deliberate and introspective. They are unafraid to be dark and emphasize their lyrics through layers of electronic beats with dramatic pauses and stops in the music. This — in combination with the repetition of lyrics — leads to a hypnotic feel. The songs are full of multiple styles and often change tempos and lyrical feel within the same tune. Moreover, the percussionist’s additions to an electronic background gives the band an organic feel, since, “you can’t really rock out to a drum machine,” Cleveland said.

Like their dissimilar musical tastes, they all have different ways to describe The Life’s sound. Keeble jokes that they sound like Coldplay, which is far from the truth. Rosenburg calls it electronic honky-tonk, while Larson said it is “a touch of Elliot Smith and anger.” Cleveland sums it up as lots of different genres coming together. However, one consensus among the band is that music is used to explore the darker side of their personalities.

“There’s not an emotional pull in a band that I’ve seen in a long time, and we try to do that.  We’re really not afraid to be sad or be dark,” Larson said. “We’re not talking Goth-dark. We’re different. We’re not white-belt, tight-pants, every poppy song.”

Their influences, Larson says, are death, nightmares, sex and broken hearts. Any element of their lives can be inspirational; hence, the band name: The Life There Is. And if you haven’t gathered, they’re also incredibly humorous despite their “dark” undercurrents. Their myspace page, in fact, says that they are influenced by “long walks on concrete, scabs, loose change and you.”

“It’s how we deal with the worst parts of our lives. We are funny people. We don’t walk around in black, but that is what our music is,” Cleveland said.

Larson and Cleveland have played together for two years since they met as employees at the Fox Theatre. Rosenberg, also a Fox employee, and Keeble joined within the last year. Their work at the Fox has taught them valuable lessons about performing, such as how to interact with audiences, how to get on and off stage and how to respect a venue.

Since the band learned those valuable lessons early on, at their shows The Life There Is can apply their energy towards the performance. On stage, the band takes themselves seriously, which is the opposite of their behavior off-stage, because they want to be respected by the audience. “We are not a gimmick band. Everyone has their hearts out there,” Larson said.

The Life There Is has yet to have any formal type of release, but plans to change that are in the works. The band released an informal EP shortly after forming, simply as a means to get some of their material out there. But in early December the band will return to the studio to lay down some new material, which they hope to release in a more formal setting in early 2007.