Trending Stories from The Marquee
You are at:Home»Features»…And You Will Know Us by the Trail of Dead releases their most revealing album to date
By Marquee Magazine on December 1, 2006 Features, Interviews, Tiffany Childs 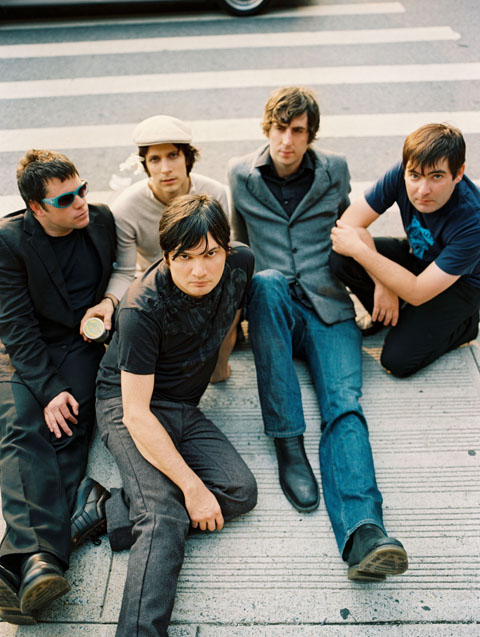 The members of … And You Will Know Us By The Trail of Dead are self-proclaimed liars. However, front man Conrad Keely (vocals/guitar/drums) assures people it is simply a form of entertainment. After all, the lies have been for the amusement of their audience, not a deception for personal gain.

The game, however, is about to change with the release of their new album on November 14. So Divided finally allows a glimpse of what is underneath all the smoke and mirrors and The Marquee recently had the pleasure of speaking with Jason Reece (vocals/guitar/drums) about what fans can expect to see.

“Musically, this album has a lot more keys and piano because Conrad has been focusing on learning that stuff,” Reece said from New York, where the band was preparing to play a record store show to celebrate the release. “It is more of Sonic Youth meets early Genesis,” he said. That’s quite a change for a band where four out of five members are drummers and previous albums have reflected that percussive drive.

In addition to the keys, Reece said that there are also new personal aspects on the record. “The lyrics on So Divided are closer to the heart,” said Reece. “Our other albums were more worldly, more abstract. They were about other people’s lives. This album came from a lot of Conrad’s experience. He was going through a lot and he just kind of had to get it out.”

Reece also said that the rest of the band — Doni Schroader (drums, piano), Danny Wood (bass) and Kevin Allen (guitar), were all supportive of Conrad taking on more lyrical control. “When someone has something to say, you support it because it’s heartfelt. You just have to trust that it’ll be good in the end,” Reece said.

It turned out to be a well-placed trust.

So Divided is layered, heavy and monumentally loud. It is filled with tender moments that rear up out of nowhere and slap you in the face. The album is reminiscent of a tumultuous love affair and makes you wonder what exactly Keely was going through when he penned particular words such as “All of you lovers who think you’re in love/I’ll put you out of your misery.” Above all, it is an album that begs to be listened to over and over again — if only as a frighteningly beautiful glimpse into the dangerous mind of a hyper-intellectual lyricist.

But through the changes the band is still staying true to its roots and not alienating its fans of old. Live audiences can still expect to see guitars thrown, drum kits smashed and onstage dance-offs. Reece was clear that Trail of Dead remains true to their original goal — entertaining the crowd. As he put it, “We want to take you on a journey, so we create songs that build momentum, songs that get our audiences worked up and don’t let them come down. The band thrives on the energy of the crowd. That is still the same with So Divided.”

So Divided represents the fifth collective work of Trail of Dead and Reece pointed out that it isn’t always easy agreeing with four other people about music. “Everyone has an opinion and it becomes a test of will at times, but it shouldn’t be easy to make an album or everyone would be doing it. Hardships create serious and substantial music and that’s what we use,” he said.

Entertainment is without a doubt the foremost thing on Trail of Dead’s minds. Even though they are celebrating the release of their latest album, they are hard at work on new projects. Creativity seems an innate characteristic of this band. “We are always ready to go with music,” Reece said. “We continue on even after a record is completed. We want to always be creative.”

Regarding what they want to create, the band has often proclaimed they want to make music that is violent yet beautiful. So Divided brings them one step closer to that goal.

...And You Will Know Us By The Trail of Dead Conrad Keely Jason Reece So Divided The Decemberists
Cool, Share this article: Twitter Facebook Google+ Pinterest LinkedIn Tumblr Email
Previous ArticleSon Volt’s Jay Farrar and Varnaline’s Parker team up for Gob Iron project
Next Article Snow Patrol roars into the states like a winter blizzard