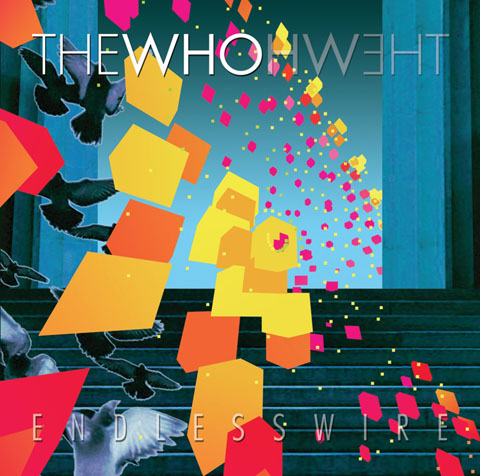 Leave it to The Who to release a totally bewildering album for their first attempt at new material in 24 years. That’s not to say that Endless Wire is a bad album by any means, but it is not a comeback album in the same vein as Aerosmith’s Permanent Vacation or AC/DC’s Back in Black. And it’s largely due to the fact that The Who haven’t written any new material in over a decade and the band has constantly toured on the strength of their hits and have never really faded from the public’s consciousness.

The million dollar question is why did The Who decide to release a new set of tunes now? Part of the answer is simply, as guitarist Pete Townshend has said many times, that the band hadn’t ever come up with anything they felt was up to par with their own legacy. However, considering the reflective nature of the Endless Wire portion of the album, the passing of bassist John Entwistle probably had something to do with it.

Endless Wire is really two albums. In addition to the first nine tracks that comprise Endless Wire, the album also contains the mini-opera “Wire and Glass.”

Among the highlights on the first part of the disc are the searing, instantly classic “It’s Not Enough” and “A Man in a Purple Dress” that pull no punches in telling-off the various authority figures that have criticized the band’s rock and roll lifestyle while hiding dark secrets of their own. While singer Roger Daltrey’s voice is as strong as always, it’s really the lyrics and songwriting of Townshend that propel The Who’s latest attempt into the 21st Century.

The “Wire and Glass” portion of the disk is rooted more in the Who’s early mod roots than Endless Wire. Songs like “We Got a Hit” and “Fragments of Fragments” are the kind of tunes that fans of past Who albums like By Numbers and Sell-Out have been waiting for.

Jeff Tweedy may well be the Bob Dylan of my generation, and his new DVD Sunken Treasure is an absolutely engrossing example of the man’s talents as a songwriter, his strength as an artist and his kindness as a human.

Filmed earlier this year, in the days leading up to the performance that Tweedy gave at the Boulder Theater in February, Sunken Treasure follows the Wilco front man around the Pacific Northwest as he tackles an assortment of songs from Wilco’s catalog, as well as songs that don’t fit into the band’s sonic folds — songs from his project Loose Fur and former band Uncle Tupelo.

Throughout it, Tweedy is wonderfully charming and hysterically self-deprecating as he humbly struggles to keep the crowd from talking during the quiet acoustic shows. Anyone who attended the Boulder Theater show will certainly remember the struggle he had there, and these shows aren’t much different.  Tweedy is also heart-warmingly strong as he eschews repeated offers for drugs and alcohol, despite his well publicized stint in rehab the year before this tour.

This man is in his musical prime and thank God it’s being recorded.

This may be the best concert DVD I own.

Having first seen the Hot IQs at a mock ’80s prom in a high school auditorium during the South Park Music Festival, one might see how the delirious joy that decade brings me could distract from actual quality. Fortunately, it did not. However, unfortunately for other local bands, the Hot IQs have taken the spotlight, having been awarded the #2 spot in the Denver Post’s Underground Music Poll, The Boulder Daily Camera’s Album of the Year for their 2004 debut, and The Rocky Mountain News named them the Best Band in Colorado.

Their newest album, Dangling Modifier, is nothing less than what you would expect. The songs are catchy, clever and deceptively poppy.

The Hot IQs are definitely going somewhere, but hopefully their upcoming tour this fall brings them back to Colorado as soon as possible. The Hot IQ’s Dangling Modifier finds the band at their fullest, catchiest and most overtly witty stage to date.

Debut albums aren’t supposed to be this strong. This is the equivalent of a freshman acing a graduate level course. New York-based Phonograph, in its self-titled release, comes off as a blend between Yankee Hotel Foxtrot-era Wilco, with the vocals of Tom Petty. Yes, that’s a big statement, and yes it’s true.

With an acoustic guitar as its centerpiece, the band weaves spacey sounds and electronic soundscapes in and out of the songs — but those songs are strong enough that they could easily stand on their own without the sonic assault.

Sometimes the Wilco influences are worn a bit too on-their-sleeves (the band has been befriended by Wilco bassist Jon Stirratt) and it does take some getting used to singer Matthew Welsh’s voice, which is so incredibly similar to Petty’s, but it’s also what will make this disc be played over and over. This is just their debut and I can’t wait for the sophomore release.

Why is it that bands never list themselves in the same genre that  everyone else does? Jam bands, for instance, are famous for claiming to be “rock bands that jam.” I guess it’s time for pop rockers to start issuing the same kind of denial about their sound.

Johnny Action Figure’s newest CD, Asks The Room To Please Stop Spinning — the band’s first release in more than two years — is clearly a pop rock album with bright, up-tempo, melodic songs, but the accompanying press release claims the content is not pop rock.   Whatever!

The Warped Tour veterans should stand behind their album for what it is because, truth be told, the album is a pretty darn good piece — one that tastefully nods to its influences from classic rock to indie pop, without getting hung up on the homage that they pay.

The Atlanta-based pop rock band has the potential to be something with enduring substance. Two of their new albums’ songs have already gained international recognition. “Let It Out” was the winner of the 2005 U.K. Songwriting contest in the rock/indie category and “Is There Something I Can Do” was a semi-finalist in the 2005 International Songwriting Competition in the pop/rock category.

Five Star Iris’ contagious rock melodies and pop-inspired bridges have supported acts such as Switchfoot, Fuel, Collective Soul and Hinder. Whether you see MTV as good or bad, this group could very well be on its way to achieving a spot in the channel’s rotation.

Killfix’s  debut album isn’t nearly as intimidating as their name sounds. The foursome delivers thoughtful melodic rock and has shared a stage with bands such as Ranier Maria and The Album Leaf.

Personally, any kind of rock song that incorporates a violin works for me, but this album definitely has potential to agree with just about anyone.

Originally a recording project for singer/songwriter Tim Pourbaix and local musician Andrew Solanyk, Killfix never intended to become a full-fledged band. After the addition of two new members, Peter Glenn and Nate Marcy,  the group shows that they have a handle on what it takes to make up a catchy, young-sounding tune.

At first listen I hear a mixture of mainstream pop and a very Northern California feel: it’s familiar but it still works. This local group has played numerous venues and is worth checking out.

loud QUIET loud: a film about The Pixies

I wrote before, on these very pages, that I was not one of the people on this planet that thinks everything Frank Black (Charles Thompson) does is sheer genius. But the new loud QUIET loud film about the Pixies sold-out reunion tour may end up making me one of those people, after all.

While there is plenty of live footage, this DVD is not a concert DVD. It’s a true film about the band, a group of four of the world’s worst communicators, who inspired and transformed a generation of musicians with amazingly brilliant onstage connections. Despite their nearly 11 years apart, the group’s members still find themselves in uncomfortable positions based on years of tension, and now they couple it with one sober band member and one who is about to go off the deep end.

loud Quiet loud is an enthralling piece. If you’re a Pixies fan you need this DVD and if you’re even just slightly interested in them, you need this as well. It’ll take you from Pixies newbie to Pixies scholar in 85 minutes.

Before the Music Dies

There is only one problem with this DVD: The people who really, really NEED to see this film, probably never will.

Filmmakers Andrew Shapter and Joel Rasmussen, two men who had no  industry contacts before starting this venture, do an incredible job getting in front of some of today’s heaviest hitters in music to tell the story of the music industry today, and its lust for commerce over content, and profits over prophets. They interview everyone from Bonnie Raitt and Dave Matthews to Les Paul and Elvis Costello.

For music fans the film is as sad as Terms of Endearment ever was, but it also shows some light at the end of the tunnel, by pointing out that alternative forms of media are flourishing and contain a wealth of opportunities for those not interested in the force-fed crap that is passed off as music in the mainstream world. Brilliant!

Truth and Lies could very well be one of the most pointless projects ever completed about the Rolling Stones. For more than an hour, a poor imitation of a BBC announcer drones on about how the Stones have been rock and roll’s bad boys for four decades. But the DVD doesn’t reveal anything that isn’t already known and hasn’t been talked about a million times. Yeah, we get it, Keith Richards got busted for drugs. So what? (There are a few minutes of rare footage that are worth seeing, but nothing overly spectacular.)

Save your cash on this one and go purchase another copy of Exile on Main Street instead.

Without Hot Rize there would probably never have been a Leftover Salmon or a Yonder Mountain String Band. Hot Rize was the pioneering bluegrass band that reached more impressive heights than these other pillars of Colorado bluegrass, and paved the way for thousands of pickers who followed.

The band went its separate ways in 1990 and since then has only performed a handful of special gigs, but in its first DVD — originally filmed in 1987, but just released last month — the four Hot Rize men, along with their oddly humored honky tonk alter-egos Red Knuckles and the Trailblazers, put on an amazing show the way bluegrass should be presented. The video also features some rare interview footage of the members, made particularly funny by the 1987 fashions. Long live the mullet and feathered blown-dry hair!