Trending Stories from The Marquee
You are at:Home»Features»Imogen Heap goes deep beyond her vocals
By Marquee Magazine on December 1, 2006 Features, Interviews, Marisa Beahm 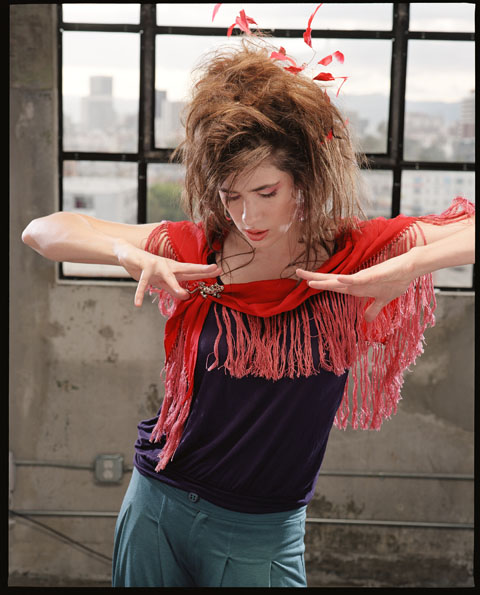 Listen to any song by Imogen Heap and you will be immediately ensnared by her sultry, versatile voice. But to truly appreciate her artistry, it is essential to dig deeper than her captivating vocal qualities.

Heap is not only a one-woman band, but is also a songwriter, producer and technocrat. She is equipped with a computer, keyboard and her emotive, mysterious voice, which she layers like an instrument for her electro-alternative music. In the male-dominated industry of music sampling and production, she combines the best of both worlds: musical talent paired with technological prowess.

“People just ask me about singing, and that came much later,” Heap said. “I sang as a kid just for fun. I never wanted to be a pop star. I just played piano,” said Heap in an interview with The Marquee.

When she was young, Heap’s aspirations were never to be a famous songstress. Rather, she wanted to be a composer and director for a world-traveling orchestra. Now, as she recently wrapped up a European tour and began an American tour, she has hit two of her childhood marks: being a musician and traveling the world. Even without the orchestra, she can create any necessary accompaniment through her tech-savvy musicianship.

Heap entered the spotlight when she and Guy Sigsworth’s (manager of Madonna and Britney Spears) band Frou Frou caught the ear of Zach Braff. Braff selected their song “Let Go” for the Garden State Soundtrack, which claimed an Emmy Award in 2005. Heap also has had numerous songs selected for television soundtracks. With a willingness to experiment with textured beats and an adaptable voice, her computer editing skills allow her to explore and create new sounds.

“I find computers really freeing. Other people think they are anti-creative, because they are splicing, but it can become as natural as typing on the keyboard,” Heap said. “If you have an idea, you can chase something or almost improvise. Sometimes I get lost in it. It’s like when you’re driving home, and suddenly you’re there and you don’t’ remember it. You just get lost in it, like, ‘oh my gosh how did I get that sound?’”

Before she was sampling beats on her computer, Heap had been playing the piano for “as long as I can remember.” Her love for the piano was so great, she would not go on vacation without one or she’d be “very grumpy.” She also played the cello and clarinet.

Later, while attending boarding school, Heap dabbled on Atari computers. The computers were “insanely slow” and came equipped with a manual the size of “the biggest Bible with the smallest print,” said Heap. Despite having her patience tested by the technology, she built her songs, starting out with a piano, a double track and some “rubbish beat-boxing.”

Heap went on to study at the Brit Music School and signed her first contract at age 17 with Almo Sounds. Her first album came out in 1998, titled I Megaphone, which is an anagram of Imogen Heap. In 2001, she began working with Frou Frou and released Details the same year. One of her frustrations with the band was she would get recognized for her singing, but people would assume men had done the engineering, mixing or programming for the record, which was her doing.

Determined to receive the credit she was due, Heap started her own label, Megaphonics, where she could control the finances, writing and recording at her own studio. To pay for the label, she had to re-mortgage her home, which gave her the funding to proceed. Under the Megaphonics label, she released her first completely independent album, Speak for Yourself, in 2005.

“It is very difficult to write about heartfelt subjects. Trying to find something magical or in an unusual way is hard. I’ve had breakups. I’ve fallen in love. All songs are about one or the other. You’re either in love or out of it,” Heap said.

After this tour, Heap is already plotting her next move: composing a non-lyrical score for a film. “Not writing lyrics will be great. It’ll be like what I wanted to do when I was a kid,” she said. Luckily for fans who admire both her composing skills as well as her voice, she is sure that after the film project she’ll be “dying to write lyrics.”