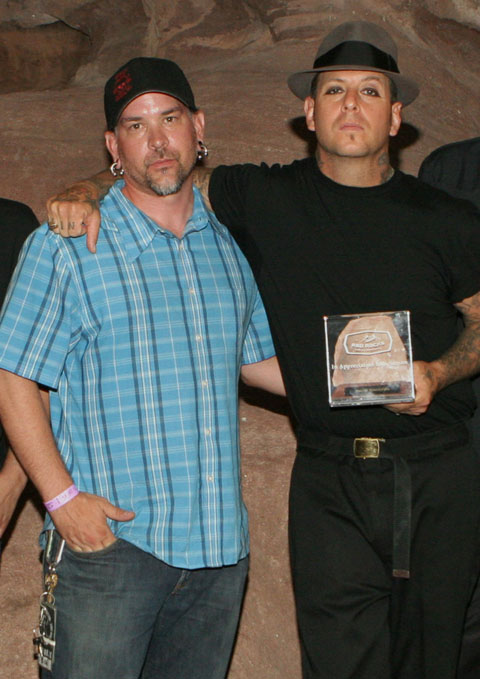 Every semester, Peter Ore is invited to speak to students in the music and entertainment program at University of Colorado, Denver, and every year he tells them the same thing — quit school and get a job — any job — in the industry immediately.

It’s not that Ore is anti-school, or anti-UCD, but Ore, who graduated from college in 1994 with an English literature degree, knows the value of physically working in the industry because, quite simply, he’s done it.

Ore, who is now 34, started as a security guard at the Bluebird Theater and over a 10 year period worked himself up to one of the region’s top talent buyers for Nobody In Particular Presents (NiPP). Now, after the recent personnel changes that swept the Front Range music scene earlier this year, Ore has found himself as the top talent buyer in the Denver office of Live Nation. It’s an odd position for a man who dresses and talks like a lot of the kids who attend his shows (although his gray hair and goatee give him the appearance of being older), but it may be just the thing that the corporate giant needs to soften its reputation.

Ore, who has always been fiercely independent, is now under the corporate umbrella of Clear Channel, and while many would look at that as a sell-out position, he is, in fact, thrilled to have the resources he now has at his disposal. His do-it-yourself attitude and unwavering work ethic have combined over the last decade to put him at the top of the talent buying game, buying more shows annually than many of the region’s other buyers put together. Now that he has the full support of the nation’s largest promoter behind him, he feels that the future is limitless.

The following are excerpts from a conversation he and I shared over beverages at Denver’s Wazee Supper Club.

Marquee: What was the first concert you ever saw?

Ore: Duran Duran at the Forum in L.A. When I saw them they were like the biggest band out there and to me it was like the Beatles. You couldn’t have seen a bigger band right then.

Marquee: Do you remember the first album you every bought?

Ore: Fucking-A right, dude. It was a double-purchase of Foreigner 4 and Journey Escape on vinyl and I still have them.

Marquee: You worked your way up in this business. Tell me about that,

Ore: I was waiting tables in Boulder where I went to school and a friend told me to talk to a friend at the Bluebird Theater. So I walked in cold off the street and asked if they were hiring. They told me no, but handed me a blank piece of paper to fill out. When I started doing that I remembered that I had forgotten to tell her that I had worked security for Program Council and that I was a supervisor. I told her that and she said, ‘O.K. You’re hired.’ I went from having no job to getting hired. So I started as a door guy. I was working security at night and waiting tables during the day in Boulder. A job opened up at the NiPP offices to like cut flyers and go get the owner’s dry cleaning and stuff for like $6 an hour or whatever it was. And I took it figuring that this way I worked for the same company and it’s all in Denver. Subliminally, I knew that was where the action was.

Marquee: How did you start booking shows?

Ore: Well I was answering phones at NiPP and basically just being the office bitch and the guy who was doing local shows seemed burned out and I asked if I could do a couple shows, ’cause I was going to, like, 7 South and all those old clubs, like the Lions Lair back in the day when they had all the great shows. So I started booking all of these local shows. I was working in the office answering the phones and going to get the boss’s burrito and washing the car and booking the local shows and at night I’d work the bar. I didn’t care. I was 24 and I was working in a club and getting drunk every night. Literally, that stupidity got me to where I am today.

Marquee: Then when did you really start being a talent buyer full time?

Ore: I was doing all of the local booking and the shows were doing well — I had a good work ethic, I used to go out and handbill and promote all of my own shows to really make it happen — and I started to put together bigger ones and finally the owner was, like, ‘Here’s some other dates, see what else you can get.’ And the phone at the Bluebird would just ring, and I was the one answering it, so I’d get people calling me to do shows. My first national show was the band called Wormhole X — and by national I mean, not Denver. I don’t know if you’d really call them a national band. They were on Epitaph, I think, and I put them as the headliner and I was, like, “From California” on the poster. And then I started to pick up reggae shows or a blues thing and I was buying tighter than the owner, ’cause it wasn’t my money and I was so afraid to lose it. I remember when $1,000 was a big guarantee. I’m still a really tight buyer. That stuck with me. And I was doing better than the owner and he was getting interested in other things outside the club, so I ended up being the in-house talent buyer for the Bluebird.

Marquee: What was the first big show for you?

Ore: Well, my first sold out show was Cherry Poppin’ Daddys, Let’s Go Bowling and Real Big Fish. I remember the owner coming up and giving me a $100 bonus, and I felt like I had just won the lottery. It was so special.

Marquee: What has the move to Live Nation done for you?

Ore: Everyone keeps asking me that and how I’m going to survive in this corporate environment ’cause I’m not a corporate guy at all. But, at NiPP I had my legs cut out from under me at a certain point. I could only bring a band up to a certain point and then it was, like, ‘Hey you’re my friend and all, bro, but we gotta go play the Fillmore. Sorry.’ Now I can. I can take a band from 300 seats all the way to Red Rocks. But beyond that, it’s the professionalism of it all. My analogy is that at NiPP I was in my little foxhole with a tin pot on my head and little cap gun trying to fight the Third Panzer Division, and I did a great job on that there. But now I have my own tank division and I have air support and I have troops all over the country. I have the general in his office and forward observers. I got the whole thing, man.

Marquee: Why do you do what you do?

Ore: I’m not good at anything else. I got lucky, man, by stumbling into something like I did was totally an accident. I didn’t mean to be a talent buyer. I was just a dumb kid who wanted to get drunk and listen to music. But I’ve never taken it for granted. I’m the luckiest bastard on earth and I mean that whole heartedly.