Trending Stories from The Marquee
You are at:Home»Features»Son Volt’s Jay Farrar and Varnaline’s Parker team up for Gob Iron project
By Marquee Magazine on December 1, 2006 Features, Interviews, Timothy Dwenger 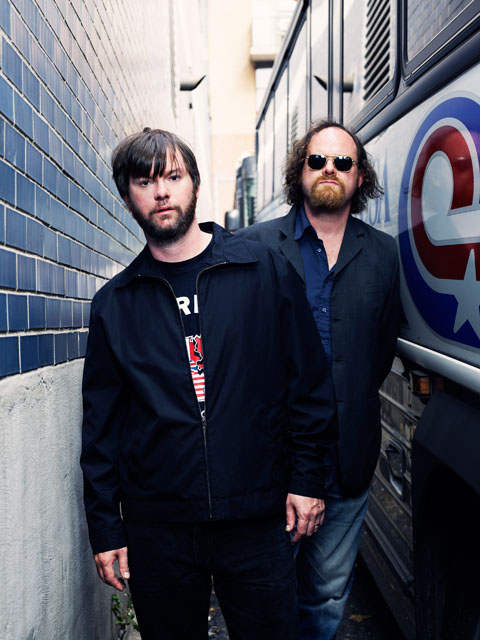 It may be British slang for a harmonica, but on this side of the pond Gob Iron is Jay Farrar’s folk infused side project with Varnaline leader Anders Parker. “Anders had been on tour in England and his tour manager kept referring to his harmonica as a ‘Gob Iron,’” said Farrar, the Son Volt front man, from his home in St. Louis in a recent interview with The Marquee. “We decided it was the most ambiguous and most appropriate name for the project.”

The duo’s debut release, Death Songs for the Living, originated as a concept Farrar came up with for a Son Volt album. “This kind of project is something that I had always wanted to revisit, having done March 16-20 with Uncle Tupelo years ago. The initial idea was to have it be a Son Volt side project but that didn’t really work out. Anders and I had the time to do it, so it morphed into our project.”

When Farrar and Parker decided to go it alone they entered the studio with a batch of old school folk and blues songs by the likes of The Stanley Brothers, Stephen Foster and Rev. JM Gates. Five days later they emerged with all 19 tracks for their debut album recorded.

“We didn’t do a whole lot of planning or put a whole lot of forethought into it really,” said Farrar. “We both just kinda did our thing and both intuitively felt that adding some more contemporary elements to folk music was the way to go.”

The record’s instrumental tracks were almost an afterthought, according to Farrar, who admitted that those tracks were laid down on the last day in the studio and were basically the product of “organic jamming.” The short snippets of clean acoustic mountain music that appear on the record after each fully developed track serve their purpose very well as they transition the listener smoothly from one song to another.

“On the record I played piano, acoustic guitar, drums, bass, slide guitar and dulcimer,” said Farrar. On the road, he and Parker also play several instruments each and Gob Iron expands to a trio with the addition of Farrar’s long time touring buddy Marc Spencer on electric guitar.

Since Gob Iron has only one album at this point, both halves of the duo have been playing an acoustic set before taking the stage together to perform tracks from Death Songs. Uncle Tupelo fans may be a bit disappointed to learn that Farrar isn’t planning on breaking out any of that material in his set. “I am playing some songs from the new Son Volt album but I am primarily mining solo records,” he said. “I’m not going too far back, everything was released this millennium.”

Fan and critical response to the new project has so far been very positive, though Farrar did acknowledge that the first few shows were sparsely attended. “I think it has taken a while for people to wrestle the name to the ground, you know.  We pretty much started touring right when the record came out but I think the name is starting to get out there by now,” he said.

The brief East Coast run was followed by a break and at this point Gob Iron has only a handful of dates on the schedule this year and two make-up shows in the New York area in January. “Whether Gob Iron continues beyond this stretch of dates remains to be seen,” said Farrar, who is looking forward to a March release of the new Son Volt record. As for Parker, he is touting his new solo album on this tour and has his own band to focus on.

Whether Gob Iron is a flash in the pan or a project that floats in out of our collective consciousness for years to come, now is the time to witness these two masters of alt-country mine the traditional folk cannon.

Gob Iron Jay Farrar Son Volt The Stanley Brothers Varnaline
Cool, Share this article: Twitter Facebook Google+ Pinterest LinkedIn Tumblr Email
Previous Article’8Os icon Thomas Dolby reemerges from obscurity with a new plan for his music
Next Article …And You Will Know Us by the Trail of Dead releases their most revealing album to date