Trending Stories from The Marquee
You are at:Home»Brian F. Johnson»The Giraffes throw rules out the window and get set for new release
By Marquee Magazine on March 1, 2008 Brian F. Johnson, Cover Story, Features, Interviews 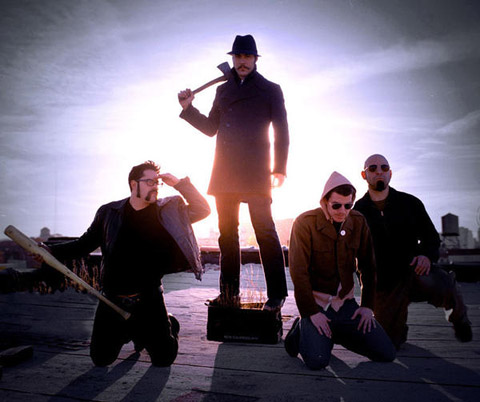 Few bands could get away with making spray painted “tour shirts” that read “Fuck in Jail” and “Touching is Teaching” but, then again, few bands have the take on rock and roll that Brooklyn, New York’s The Giraffes do.

The band’s web page gives some insight into that take with a rant that reads, in part: “Somewhere along the way rock and roll lost its edge and humor to a tawdry compromise with commercial success and the tired hackery that goes along with the trumping of ‘the next big thing.’” The rant goes on to unapologetically explain, loosely, who The Giraffes are and adds, “If you hate it, then go enjoy John Mayer and make sure to give him a reach around.”

If those last few sentences were your very first exposure to The Giraffes, you may very well have it in your mind that the four-piece rock-bordering-on-metal band is made up of a bunch of assholes, and in a sense you would be right. But what lies under that caustic, abrasive and over-the-top homo-erotic facade are a bunch of guys so fed up with the lack of fun in rock that they’ve gone out of their politically incorrect ways to throw their middle finger in the air to it all and simply make fun of it, while throwing down some kick-ass music in the process.

“It’s really tough because of motherfuckers like you who take words that come out of my mouth and put them on paper and make me sound like a deranged, child touching, coke snorting fucking clown,” said lead guitarist Damien Paris in a recent interview with The Marquee. “But we’re sick of how safe everyone plays it. How can you take them seriously? The only thing I take serious is that I’m going to practice so when I get on stage I can get up and do whatever I fucking want to. I’m only serious in that I don’t want to be a complete slouch.”

Since the 1990s, Paris has been taking it seriously. He formed The Giraffes in 1996, as a three-piece, almost surfy, hardcore band. “I was listening to indie rock and cock rock and it was doing things to me, man,” he apologetically said. Having a complete disdain for most lead singers, Paris originally belted out lyrics for the band. But when it got to the point that even close friends couldn’t say anything good about the band’s vocals, Paris found Aaron Lazar at a drunken party, where he made Lazar do an on-the-spot rendition of Prince’s “Kiss,” and The Giraffes as a four-piece were born.
“Aaron really changed my idea of the merits of what a great lead singer can and should be,” Paris said. He reinforces the melody. Most lead singers are so fucking annoying and ruin so many good bands. That’s why I don’t like (Iron) Maiden. Bruce Dickinson was a chump. He’s the Budweiser to Judas Priest’s Grolsch — a fucking third-rate (Rob) Halford.”

Lazar, in fact, has changed many people’s ideas of what a rock/metal band’s lead singer should be. Simply put, he’s the real deal, and his story is as twisted as the band’s sense of humor. At the age of 28, Lazar, who appeared to be in pretty good health, suffered what doctors call Sudden Cardiac Death. “I had two cardiac deaths in like six hours, oh, and a seizure,” Lazar said, when he also spoke to The Marquee. “But I was really only awake for the start of the first one, so I’m not that tough, just fucking lucky.”

Lazar is now 31 and is fitted with a pacemaker/ defibrillator to help keep his ticker on track. “So if I ‘stroke out’ again, as Damien calls it, or have another episode of cardiac death, this thing is supposed to kick in and jump start me back up. The problem is it’s a fucking machine so it lives by rules, and rules are weird,” he said. “If my heart rate gets too high it defibs any way, even if I’m not having a heart attack.”

Lazar exercises and rides his bike all over New York City without issues, but he said performing is different. At a show in Chicago, in fact, his heart rate increased enough that he got zapped by his internal device three times in 30 seconds, a dose of 30,000 volts — and he finished the fucking show! “The good news is that it’s over almost instantly. The bad news is that it freaks you out so your heart rate goes up even more and it hits you again … Take the feeling of an electric fence shock and then add to it the feeling of a horse kicking through your chest and hitting your heart,” he said.

Editor’s note: This story was recently turned into a video by director B.A. Miale.

“Prime Motivator” – The Giraffes from BAMiAM on Vimeo.

Luckily, he has his band to help him if it happens again. “Damien has said, ‘Don’t worry, if you stroke out again I’ll take pictures of you with my balls on your head,’” Lazar reported.

Again, only their playing is taken seriously. So seriously, in fact, for their forthcoming release, the band’s eighth release (counting some EPs and a vinyl seven-inch), they traveled to Rancho de la Luna in Joshua Tree to record. The studio has previously been home to Daniel Lanois, Queens of the Stone Age and The Eagles of Death Metal, and where the various artist recordings of The Desert Sessions, founded by Queens of the Stone Age’s Josh Homme, were set down.

“When you listen to The Desert Sessions you can hear this wonderful weird little aura around everything,” Lazar said. “I always thought it was some production trick or some little secret mastering thing that nobody knows about. But we got there and Drew [drummer Andrew Totolos]hits the kit and I was, ‘Oh, it’s just this place sounds like that.’ It’s bizarre. And I’m a huge hater of the word ‘vibes’ but there really truly is something special about the place.”

The recording of the new album, Prime Motivator, went well and has even garnered some potential label interest, but as of press time the band was uncertain if it will be picked up or if they will release it independently. “Your album is like your children and you want your children to go places and hopefully not turn out retarded,” Paris said. “God knows the only law is Murphy’s Law, so who knows what could come back to me and botch it, but hopefully someone who puts out records will put it out and, if not, we’ll put it out and it’ll still be a damn good record.”

If the new track posted on the band’s myspace page, “Louis Guthrie Wants to Kill Me,” is any indication, the new record could show the band pulling out some different sounds than their previous work. “We weren’t afraid to slow it down and do some things that are risky, because risk always translates so fucking well in the music industry,” Paris sarcastically said. While Paris writes the majority of the music and Lazar pens the lyrics, they said that the band as a whole is very collaborative in their approach. “Really, the only rule I have is that if I write a rocking riff, don’t make the song about ponies — unless they’re on fire,” Paris said.

Lazar said that the writing process for The Giraffes is a slow motion version of their live show. “Typically, Damien does way too much, goes way too hard and flips his fucking brain and then I grab him by the neck and force him to stand still in one place, or slap him around or something and then everyone reacts to what’s going on there,” he said.
While John Rosenthal played bass on the album, he has since left the band and been replaced by Denver native Jens Carstensen.

Recommended if you Like:
• Big Sleep
• The Limbs
• Eagles of Death Metal