Trending Stories from The Marquee
You are at:Home»Features»Jammys calls it curtains, honors Phish
By Marquee Magazine on May 8, 2008 Features, Live, Live Reviews, News

Phish Appear on Stage For First Time in Four Years

Chevy Chase Accepts Award He Did Not Win 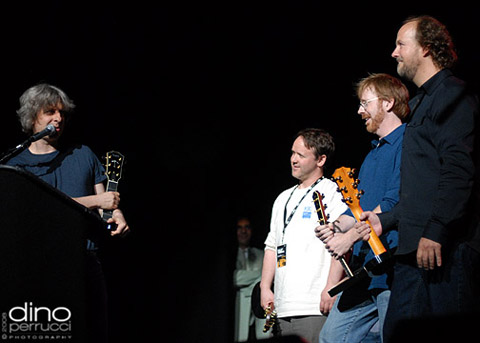 Phish accepts their Lifetime Achievement Award May 7, 2008 at the Jammy Awards in New York City

(New York, NY) – The four members of Phish accepted the Lifetime Achievement Award last night at the 7th Jammy Awards. It’s the first time the band stood onstage together since their final concert in Coventry,VT in 2004. The surprise reunion followed an emotional speech from longtime Phish photographer Danny Clinch.

Each member of Phish addressed the audience from the stage. Mike Gordon, Page McConnell and Jon Fishman delivered quick acceptance speeches, before handing over the microphone to Trey Anastasio, who thanked a number of key members in the Phish organization by name and described his former bandmates as “his oldest friends.” He also talked at length about the strength and importance of the Phish community, before bowing alongside his bandmates and quietly exiting the stage.

Phish’s emotional speech arrived near the end of an action packed Jammy Awards, which featured the unique collaborations the ceremony has become known for over the years. 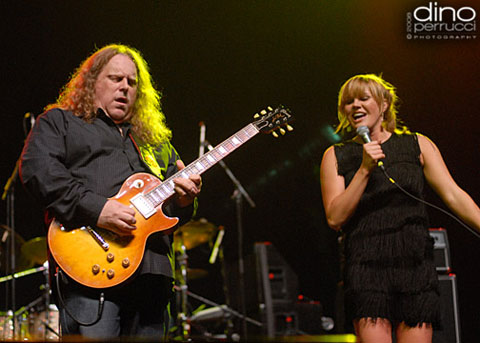 Co-hosts Warren Haynes and Grace Potter opened the evening with a band that consisted of Stax keyboardist Booker T. Jones, Fab Faux bassist Will Lee and drummer Joe Russo. The supergroup ran through a number of classic rock covers, including Crosby, Stills, Nash & Young’s “Find the Cost of Freedom,” Fleetwood Mac’s “Gold Dust Woman” and Al Green’s anthem, “Take Me to the River.” 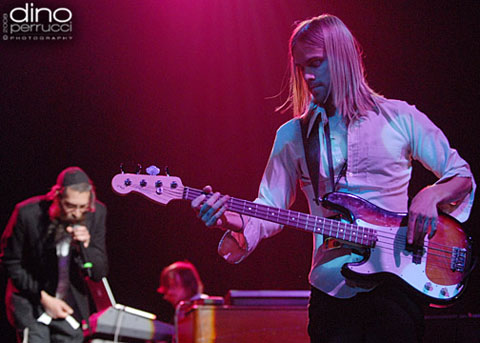 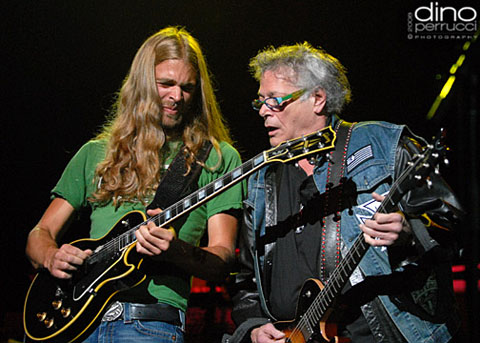 The strange bedfellows ran through a cover of The Flaming Lips’ “In the Morning of the Magicians,” before Mountain guitarist Leslie West took the stage with Rose Hill Drive for the evening’s loudest offerings. The hard-rock guitarist jammed with Rose Hill Drive and Potter on a version of “I’m Going Down” that included “Close Encounters,” before offering his signature song, “Mississippi Queen.”

Next up, Keller Williams took the stage to perform a solo version of his Jammy nominated song “Cadillac.” He was quickly joined onstage by comedian/actor Chevy Chase, who unbeknownst to most is a one-time college band mate of Steely Dan’s Donald Fagen and Walter Becker. On this occasion, Chase opted to play piano alongside Williams on a rearranged version of “(You Made Me Feel Like) A Natural Woman” and a medley of “Sweet Home Alabama” and “Take the Money and Run” that earned some of the evening’s loudest cheers. The pair apparently bonded backstage and when Williams later took top honors in the Song on the Year category, he sent Chase onstage in his place for a humorous speech that included the line “I want to thank Clive Davis just because I feel like I should.”

As the show went on Tea Leaf Green made its Jammys debut with guest bassist Steve Adams (ALO) and fiddler Allie Kral (New Groove winner Cornmeal) for a rendition of their 2006 Jammy winning number, “Taught to be Proud.” Big Head Todd’s Todd Park Mohr and Squeeze’s Glen Tilbrook also sat in with the expanded group on their songs “Pulling Mussels (From The Shell)”and “Tempted,” respectively, the latter of which featured some choice guitar work by Haynes himself.

McConnell, who was the only member of Phish confirmed to play the Jammys in the weeks leading up to the event, appeared early on to accept Phish’s award in Download of the Year category for the charity track the “Headphones Jam.” He also led an all-star jazz combo that included drummer Roy Haynes, saxophonist James Carter, trumpeter and former Anastasio collaborator Nickolas Payton and bassist Christian McBride through two of his three recorded Phish originals: “Magilla” and “Cars Trucks Buses.” The performance followed an appearance by Jon Fishman, who presented the Mimi Fishman Memorial Award on behalf of his late mother to the non-profit Rock the Earth.

Galactic balanced its jazz/funk past with its hip-hop present, inviting out a slew of guests, including Booker T. Jones, Sharon Jones, Jurassic 5’s Charlie 2na and MC Doug E. Fresh for songs like “Hip Hug-Her,” “Born Under A Bad Sign” and “Think Back,” among others.

The evening’s surprise guests really started coming out in force when Beatles tribute act the Fab Faux took the stage with stealth performer Joan Osborne for a rendition of “Come Together.” The Fab Faux then busted into “While My Guitar Gently Weeps.” Anastasio emerged partway through the song to thunderous applause to take an extended solo, before leading the group into a jam uncharacteristic of the cover act. He remained onstage for the rest of the group’s segment, which included a tease of “Bungalow Bill” and a full version of “Everybody’s Got Something to Hide Except Me and My Monkey.”

The rest of the night focused on Phish, both before and after the four members of the group took the stage to accept their award. After the quartet slipped into the wings, Disco Biscuits bassist Marc Brownstein led Disco Biscuits guitarist Jon Gutwillig, String Cheese Incident keyboardist Kyle Hollingsworth, Umphrey’s McGee guitarist Jake Cinninger and Russo through a series of Phish covers under the name the HeadCount All Stars. Brownstein led the charge through spot-on renditions of “Wilson,” “Run Like An Antelope,” “2001,” and “Maze,” the latter of which also featured Disco Biscuits keyboardist Aron Magner.

“We accomplished our goals with the Jammys and it’s time to take this momentum in a new direction,” said executive producer and co-founder, Peter Shapiro. The event will evolve into a larger celebration of live music.

After appearing at the 7th Jammy Awards, Galactic headlined the official Jammys post-party at New York’s B.B. King’s Blues Club. The Jammys post-party is known for its special guests and this year’s festivities proved to be no exception. Miyazawa, who worked the crowd into frenzy when he presented the New Groove Award at the Jammys, was escorted onstage with Galactic by Zenbu Media president Steve Bernstein, and proceeded to lead the quintet through a cover of Ozzy Osborne’s “Crazy Train.” Miyazawa played a v-neck guitar the size of his pint-size body to thunderous applause well past his bedtime. The young guitarist also made a stealth appearance earlier this week at an open mic night held at New York’s Rodeo Bar. As expected, Galactic also invited several old friends onstage throughout its late night set, including Jurassic 5’s Charlie 2na, Cheme and Trombone Shorty.

The following is a complete list of winners at the 7th Jammy Awards: