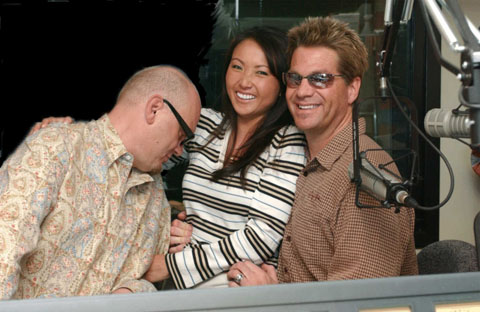 As the producer of Denver’s top-rated morning radio talk show, 103.5 The Fox’s “Lewis and Floorwax,” Kathy Lee is the glue that holds the team together.

The Korean-born Lee, who moved to Colorado when she was only two, plays the role of the informer when the boys are on the air — the one who is quick to grab a fact, or direct the off-the-cuff hosts into the topic du jour. But the other part of that role is being, almost daily, the butt of the joke, discussing embarrassing moments of her personal life simply because it makes good radio.

Even though her audience can only hear her, it’s obvious that the majority of her time on the air is spent with a smile, enjoying the hell out of taking “water cooler conversations” and broadcasting them throughout Denver and the Front Range.

Marquee: What was the first concert you ever attended?
Lee: Michael Jackson on the Victory tour at Mile High Stadium in 1983. I was 10 years old. I remember all my first concerts. My first Red Rocks show was Def Leppard, the Pyromania tour. My first McNichols show was Guns N’ Roses in 1989 and my first Fiddler’s Green show was Rush in 1988.

Marquee: What was your first job in the industry?
Lee: Well, in college I interned at MTV in New York. Then I interned in Denver at KS 104, (it was like 107.5 today) and I interned at Channel 4 in the sports department. I thought I was going to go into TV, doing anchoring. But I was also interning for Lewis and Floorwax’s agent Peter Schaffer and he asked me to ‘just go help them’ and after a few weeks they offered me a job as their producer.

Marquee: So, right out of college you went from having internships to being a producer?
Lee: Yeah. I was 22 years old and I was going, ‘What does a producer do?’ A lot of my intern jobs were going to get food and pull carts. They had already been on the air for five years and were the number one show. Now it’s different because I’m seasoned but at the time they’d tell me, ‘We want this guest,’ and I’d be like, ‘O.k. How am I going to get them?’

Marquee: Well, now that you’ve done it for 12 years, what does a radio show producer do?
Lee: I do a lot to help them get prepared. You know, I book all the guests and that stuff, but every morning I pull like 500 articles from the internet, and I look to see who’s coming to town and find fun stuff for them to talk about like the top 10 reasons why men don’t want to have sex. That kind of stuff. I make it so that when Rick and Wax walk in, they’re prepared. The jokes aren’t prepared, that’s all ad-lib, but I give them the tools to sit down and talk for four hours.

Marquee: What do you do on the days when there is nothing to talk about?
Lee: We have standbys and phone burners, but that doesn’t happen a lot. I mean, everyone has a book these days, and they all want to talk about them, so we can usually get someone on.

Marquee: What about the days you just don’t feel like being charismatic and on the air.
Lee: Well, we all have them, but there’s never a time when all three of us have a down day at once. And, you know, it’s four hours. If you can’t get through four hours, I mean, c’mon.

Marquee: You guys discuss some pretty personal stuff on the air. Was that a tough adjustment for you at first and how do you deal with not having anything that’s really personal?
Lee: It’s tough to have your personal life on the air, but that’s what makes our show real. You’ve got to be able to talk about that. People want to hear that you’re just like them and that’s how we relate to our audience. It’s the personal stories we tell. Our off-air banter is really hilarious and x-rated. When we’re not on the air, I’m probably 10 times dirtier than both of them. I gross them out a lot. I talk about taking a poop a lot.

Marquee: Are you worried that in our iPod world that radio is at risk?
Lee: No. First of all, radio is free. And that’s what I was talking about with relating to your audience. There’s a personal connection and you bring your personal experiences with it. Radio has changed a lot, but Rick and Wax are legends of radio because they’re still live. It’s not canned. And as radio continues to change I think it can still hold its own. People like the stories and the silly games and all of that.

Marquee: What was your most memorable day on the air?
Lee: Well, meeting Captain Kangaroo was one. There was a real presence about him. But, the other was being on the air when 9/11 happened. The only thing you could do was express your emotions and the greatest thing about these guys is they’re so good at doing that. That day I was really impressed with them as to how they handled things. You know, besides the comedy they blow me away with how they can relate to people, and their knowledge about everything, sports especially. Wax can’t remember where he put his keys, but his long-term memory is unbelievable.

Marquee: Because of this show, you posed for Playboy. How did that happen and what was it like?
Lee: Yeah, Playboy did a women in radio issue and they asked me to do it. It was nerve racking. I starved myself for like a month beforehand. But it’s not like I was spread eagle or anything. The photographer and the crew have seen millions of naked women before so that made it easier.