Trending Stories from The Marquee
You are at:Home»Features»Denver’s Matthew Skellenger works to make the bass a lead instrument
By Marquee Magazine on January 1, 2009 Features, Interviews, Timothy Dwenger 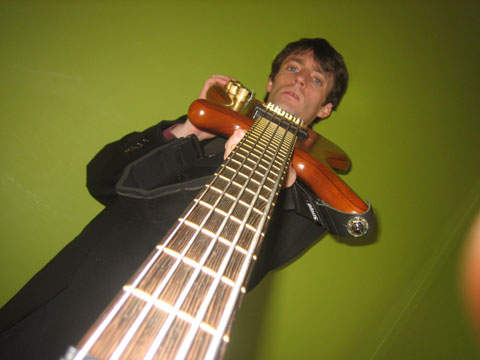 The electric bass is often thought of as only a part of the rhythm section of a band, an instrument that blends into the background. Yet we’ve all got to remember that no one would be dancing to funk music without a good bass player and the bass beat is what anchors any good dance track. It is a critical part of music and the fact that it is over-looked by so many is a crime.

There are several players out there in the world who have dared to bring their bass playing to the front of the mix and make any self respecting music fan stand up and take notice. Some that come to mind include Les Claypool, Victor Wooten and Mike Gordon. Each of these players has something in common; they have the ability to play the bass as a lead instrument and they can coax melody from an instrument largely relegated to the rhythm section.

These players also have another thing in common; they have all been huge influences on Denver native and wildly innovative electric bass player Matt Skellenger. Skellenger, who grew up in the Denver area, stumbled upon the bass guitar after years of violin and piano lessons. “I started playing electric bass when I was 14,” he said in a recent interview with The Marquee. “Right at the end of my eighth grade year I had a friend who had bought a little bass and amp combo and I played it at his house one day. As soon as I got in the car to go home I told my Dad that was what I wanted to do. It seemed like the right thing to do at that time and it still does. It was one of those light bulb moments and ever since then I’ve been doing it.”

Fifteen years later, Skellenger has been fortunate enough to be able to make a career out of playing in established local bands such as Katalyst, The Lovely and Talented, and Ron Miles’ Blossom Band, as well as performing solo. His captivating solo performances rely heavily on his almost superhuman ability to play both a complex melody and a rhythm part at the same time.

“A lot of what I do is based around two-handed tapping,” Skellenger explained. “I initially got that from Les Claypool but he seems to be a little more percussive with it and not quite as melodic. Then I heard Victor Wooten and Michael Manring and they are the ones who really opened my eyes to how melodic you can be with this method of playing. Melodic tapping is the main thing about my playing that kinda separates me from a lot of guys. One of the things that I have been trying to develop is my ability to improvise comfortably with my right hand while still playing the bass lines with my left. That is still a work in progress at this point.”

While Skellenger currently gives lessons to aspiring bassists to supplement the income he earns playing out, he may not have to do that for long, as this month he is releasing his first album as The Matt Skellenger Quartet. The album is entitled Parentheticals and the group is rounded out by Denver jazz legend Ron Miles on trumpet and cornet and Skellenger’s brother Andy and longtime friend Dave Miller, who share various drum duties.

“I went to Metro for college and so I studied with Ron Miles and Fred Hess and everybody over there, but it wasn’t until about three years ago that I actually had enough courage to ask Ron if he wanted to play with us,” Skellenger said. “He was way into the idea and he put a lot of effort into this album and rehearsals and stuff. It has been a great thing having someone who was my mentor and teacher actually want to be involved and want to play in this project.”

The project showcases Skellenger’s wide array of talents, as he also composed a bulk of the music. His dexterous bass playing will make many think that there are several other players or layers and layers of overdubs, but it’s all one man with no studio wizardry. Miles compliments the bass parts with his soulful and slightly mournful cornet on each track of the album. The album was recorded in Denver at Notably Fine Audio and though Skellenger had planned to release the record himself, it didn’t take long for it to get noticed.

“I played an Obama benefit in Ron’s band at Dazzle and Jill Fredrickson played drums with us. We had recorded ‘Makeda’ from Parentheticals in Ron’s band also, so we played it at that gig. After the show she told me she wanted to learn it better, so I gave her a copy of the album and her husband Michael, who is the owner of Synergy Music, heard it, really liked it and offered to release it. So, now Synergy is going to distribute it nationally, both physically and digitally, and they are also going to do a radio/PR campaign.”

Clearly, the pieces are fitting together for Skellenger this year, but it took a leap of faith and some hard work on his part to get here. “I made all these goals at the beginning of 2008 about what I wanted to do musically and now they are starting to come to fruition. I think the reason why is because I made the effort to do it and dedicated the time and money to record without really knowing what was going to happen.”