Trending Stories from The Marquee
You are at:Home»Brian F. Johnson»Marc Ford reinvents himself again with a new band, the Neptune Blues Club
By Marquee Magazine on January 1, 2009 Brian F. Johnson, Features, Interviews 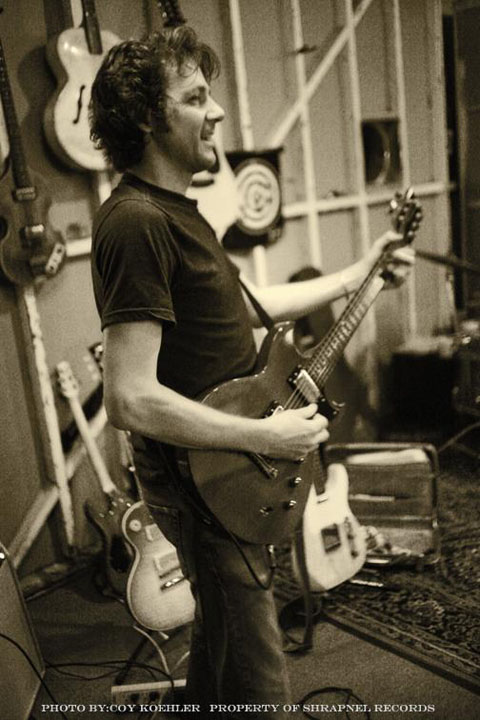 Marc Ford hasn’t had it easy, but he’s certainly had a lot, and life just keeps giving him more.

Just two days after he and his wife had a baby girl named Eva, Ford talked on the phone with The Marquee about this newest addition to his life and also about another chapter that he recently started — his new band The Neptune Blues Club.

Ford reported that Eva — Ford’s third child, but first daughter — was born on a Friday morning and that both mom and baby are happy and healthy.

And speaking of happy and healthy, Ford — never a huge talker — seemed almost giddy compared to his normal self about the prospects on the road ahead. This, from a man who at one time was dismissed from The Black Crowes because of his struggle with drugs, and later, after a reunion with the band, dismissed himself because he said it was difficult to maintain his hard fought sobriety in proximity to that group. But, he should be bubbly right now.

In September, Ford and his newest band The Neptune Blues Club released Marc Ford And The Neptune Blues Club with absolutely no radio or promotion whatsoever. The album climbed to number 15 on the Billboard charts. “I thought somebody was fucking with me. I got the e-mail that said it was at 15. It did that for the first and second week, and then I quit looking because I didn’t want to know after that. It was cool. I’ve never been on Billboard before,” said Ford.

While Ford has built his career and his name on loud rock and roll guitar, The Neptune Blues Club is a different direction for the 42-year-old axe man. “It’s a dance band, ya’ll” he laughed. “They’re all Long Beach guys and I’m a Long Beach guy and Signal Hill is the studio in the middle of Long Beach,” Ford said.

The band is rounded out by Stephen Hodges on percussion, John Bazz on bass, Anthony Arvizu on drums and Mike Malone on B3 and piano, as well as harmonica player Bill Barrett.

“Neptune is a gentleman’s band, with a bunch of older, seasoned players. This is the most fun I’ve ever had with a band. It’s just one of those things that when the six of us are together there’s a chemistry,” Ford said of the band, explaining too that he named it after the Neptune Society, which he learned about from a rusty old sign. “I saw this thing and I thought what a cool name. I didn’t know there was a Neptune Society, but came to find out that it was for deceased naval vets who didn’t have family, and they would cremate them and bury them out at sea. When we started playing together I wanted something faceless. My son (Elijah) said something about Jefferson Steelflix and the Neptune Society, which I really liked, but I had a contract to finish with a label and they, of course, weren’t going to be o.k. with Jefferson Steelflix, so it became Marc Ford and The Neptune Blues Club,” he said.

While the band is new and there is a whole album of new material, Ford said it doesn’t mean that he won’t continue to revisit material from his solo albums Weary and Wired and the amazing It’s About Time. “We do a couple songs from both of those records, and definitely there are some things that I do differently with this band. It’s a certain vibe. You know this is a stand-up bass in this band, so the power is different and more swinging than actual muscle,” he explained.

Ford is excited to play with the band, but being on the road, especially so shortly after having a child, isn’t Ford’s ideal situation. Over the last several years, he has taken on producer duties, working with a number of artists including Pawnshop Kings, Ryan Bingham and The Steepwater Band. “I made a deal with my wife to get more producing jobs so I could stay at home more, so that when I do go out on the road, I can enjoy it more. I really do enjoy it, but it gets to be a bear after a while. Our last tour we had some really good shows, but every week has a Tuesday and a Wednesday and those are usually in B markets and I start to think, ‘Man, I could be home instead of this.’ When you have to go out on the road, it’s a drag. When it’s the only way you can make a living it’s a real grind,” he said.

But even with the prospect of packing into a van in the coming weeks, Ford is still excited. “This really is a fantastic band. It’s as good a band as any I’ve ever played in. It’s the shit, the real deal. Just put us in front of an audience and it will work out,” he said.