Trending Stories from The Marquee
You are at:Home»Features»Young Coyotes give the Denver indie scene something to howl about
By Marquee Magazine on January 1, 2009 Features, Interviews, Tiffany Childs 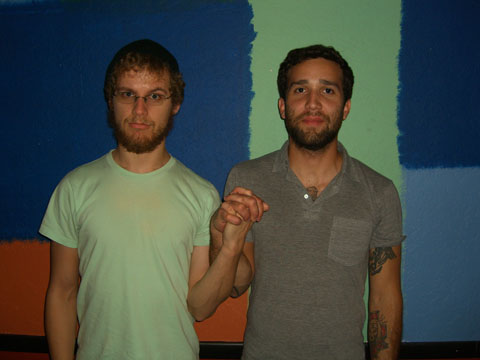 Young Coyotes are a band fairly new to the music scene, which makes the whirlwind of buzz they’ve been receiving of late a little more surprising. Until you listen to what they are playing. With comparisons from Arcade Fire to Akron/Family to The Shins, this two-piece is creating songs that sound like super lo-fi DIY indies mixed with a little Motown. And, apparently, they are doing it at breakneck speed.

In a recent interview with The Marquee, Zach Tipton (vocals/guitar) said the band got its start when Tipton and Adam Halferty (drums/backup vocals) met while touring with their previous bands (Moros Eros for Tipton, the Axe That Chopped the Cherry Tree and the Chain Gang of 1974 for Halferty). The story goes the two of them were bored and got together to jam. The result was five songs in that day. So, when their respective groups disbanded, Tipton moved from Georgia to play with Halferty. A fairly big move with what appears is on its way to a big payoff.

With five songs written in one day you’d expect an album would be forthcoming in the near future. While Tipton mentioned in the interview that Young Coyotes have as many as 20 songs written now, he remained coy about the release of an album, simply stating, “We’re recording now, but I can’t say for sure what or when.”

The duo did manage to stop by Daytrotter, outside of Chicago, on their recent tour and fans can rejoice in the fact that four tracks were recorded at the infamous studio. “It was one of our mini-goals for the tour,” Tipton said of the stopover. “Actually, I can’t believe they let us do it.” Currently, two of those tracks are online and two more will be released as “something secretive” around the end of February or early March.

Whatever the secret is, the songs are sure to have the youthful joy that fans are quickly becoming acquainted with. Tipton spoke about this sound a bit during the interview: “Lyrically, everything comes from dreaming and a nostalgic feel was our original goal. We wanted to write about things that we miss, including the curiosity of a child. So, most of our songs have the feeling of sadness of not being a child any longer, but the happiness of remembering that time in your life.”

That nostalgic feel also translates as a minimalistic sound. “It was just something that happened. Adam had a suitcase he used as a bass drum and we realized that was easier than touring with a lot of people and a lot of equipment, so we just went with it. Transitioning from our last bands, we quickly realized the pros of being able to tour in just a car outweighed the cons. It gave us a total freedom to do whatever we wanted,” Tipton said.

The freedom Tipton referred to led to a recently finished tour with the Gay Blades. Even though Young Coyotes are quite different from the Gay Blades sonically, Tipton and Halferty still say they learned a lot from the group. “We felt so awkward onstage, so it was cool to see how comfortable they were up there. They really know how to put on a good show. We thought they were crazy, but they thought we were crazy and it sort of turned into this older brother appeal. And we learned to be more relaxed if something happens, to sort of just go with it when we’re on the stage,” Tipton said.

Considering Young Coyotes’ influences range from Sonic Youth to Tom Waits to Bjork, it isn’t surprising that they learned a few things from the Gay Blades. Again, it’s the curiosity of a child that drives them in their musical endeavors. In fact, when Tipton talked about the influences, there was just one common thread — bands that can’t be pigeon-holed, that make their own sound. Tipton’s hope for Young Coyotes is that their music is distinct enough in this way, too, that “people will say, ‘That’s definitely a Young Coyotes song.’”

But that means the band is going to have to play more and release something for fans to hear often enough that they can identify a Young Coyotes song within the first few notes. With plans for a Midwest tour, then hitting SXSW, followed by more touring plans — including Europe and Japan, hopefully — the sound is poised to spread and, luckily, in the words of Tipton, you can expect a lot more shows here in Denver and many, many releases to come, because this band “is going to be putting shit out like crazy.”