Trending Stories from The Marquee
You are at:Home»Features»Dirty Dozen Brass Band recovered from Katrina, but still asking What’s Going On?
By Marquee Magazine on February 1, 2009 Features, Interviews, Kathy Foster-Patton 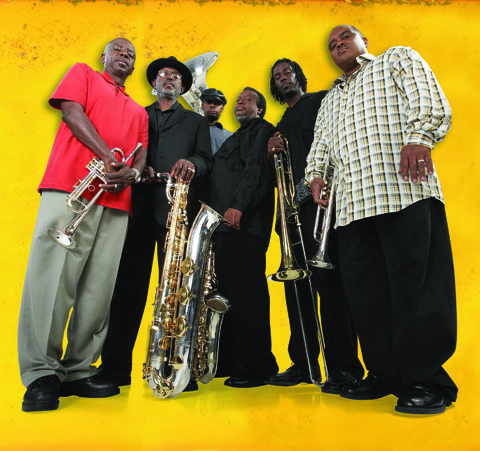 The Dirty Dozen Brass Band came together in 1977 and incorporated their own funky style into a base of their traditional hometown New Orleans music. They travel extensively and will return to Colorado in February during a northwestern U.S. tour.

Roger Lewis, founding member and baritone and soprano saxophonist, spoke with The Marquee about channeling Marvin Gaye, playing with the same bandmates for over 30 years, and their upcoming tour schedule.

The Dirty Dozen Brass Band formed out of a Baptist youth music group that ultimately morphed into a brass band. After a couple of iterations, they named themselves the Dirty Dozen and issued their first professional recording in 1980. Lewis is joined by Gregory Davis on trumpet, Kevin Harris on tenor sax, drummer Terence Higgins, guitarist Jake Eckert, Efrem Towns on trumpet and flugelhorn, Julius McKee on sousaphone and trombonist Revert Andrews. Davis, Lewis, Harris, and Towns are the original founders of the group and thus have been playing together for 32 years.

That inordinate amount of time together allows the band members to continually change their sound in ways that Lewis described as chameleon-like. “Our music is changing — always changing. We are always trying different sounds. Everything influences everything else,” he said.

And those influences have pitted them with what originally appeared to be some unlikely pairings. In the 1990s Dirty Dozen recorded and toured with Widespread Panic and spent nearly a year as the opening act for The Black Crowes. Additionally, they have recorded with Elvis Costello, Dr. John, and Norah Jones, among others.

After finishing up an engagement at a club called the Maple Leaf in New Orleans and hitting a few gigs around the Southeast, the band kicks off a West Coast tour on Feb. 4 that will take them up the coast and into Canada, before heading back down into the States to hit Colorado. The Colorado leg of the tour will feature shows in Breckenridge, Denver, Durango and Crested Butte.
All those years together, and all of that time on the road, has allowed Lewis and his compadres to  come to some humorous ways of describing their relationship. “It’s really disgusting, I’m stuck with them … No, no, it’s fun. It’s all good. We’re like family,” Lewis joked.

Those family ties have meant a lot over the years and grew even stronger in 2005 when the band members shared the experience of living through Hurricane Katrina and losing their homes and many possessions in that tragedy.

Today, Davis and Lewis are living back in the Gentilly neighborhood where most of the band lived pre-Katrina. Harris is living in Baton Rouge, where he ended up after his house flooded beyond repair. Towns is now based in northern Virginia and is not sure when, or if, he’ll return to New Orleans full-time.

On August 29, 2006, exactly one year after the hurricane struck, the Dirty Dozen Brass Band released What’s Going On? The recording is a translation of the songs from the original 1971 Marvin Gaye album. Gaye’s questions of an uncertain world felt even more appropriate some 35 years later, according to Lewis. The Dirty Dozen mixed their own vibrant instrumental talent with vocals by G. Love, Ivan Neville, Guru, and Bettye LaVette, among others. Lewis said that it is important to ask what is going on in our still uncertain world, where we deal with events such as the terrorist attacks of 9/11, the wars in Iraq and Afghanistan, flooding, typhoons, and so many other calamities.

And while they keep all of that in the forefront of their minds, Lewis said that they are also looking forward. The band is working on a new recording for 2009. “Yes, we are collaborating right now. We work so much that it’s hard to get the time and it’s hard to produce when we are on a gig. We were impressed with our last one and we plan to put something out in the next few months.”

But until then, and probably for a while after that, Lewis said that the band’s M.O. of giving people a healthy release is still the top priority. “They better wear their dancing shoes, so they can bounce, get down and boogie,” he said. “We have a three-pronged approach — we offer music for the mind, body and soul!”