Trending Stories from The Marquee
You are at:Home»Features»Oakhurst throws down at home before hitting the waves for cruise ship touring
By Marquee Magazine on February 1, 2009 Features, Interviews 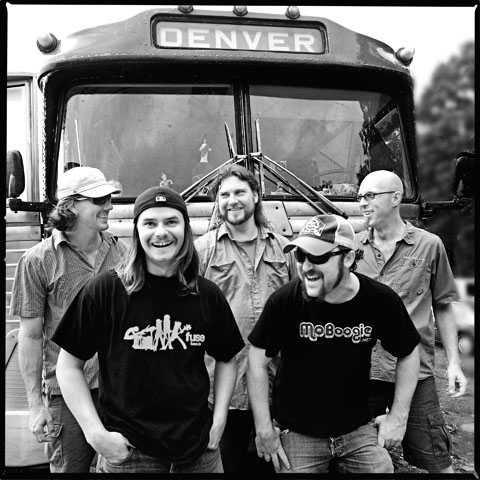 “We’re trying to build our career around that high energy and we’re going to come smash you in the face and then party with you and have a good time,” Oakhurst bassist Johnny James Qualley told The Marquee, sipping on sparkling water and sitting on top of the world at home base: The Appaloosa Grille in the heart of downtown Denver.

When the band is not out conquering the world in their eco friendly grease-gas bus or playing cruise ships on the big pond, they rest their weary bones at this beautiful bar. “We all took that chance when we came in and said let’s do this, and let’s use it as a way to propel our career rather than slow it down.” Running the restaurant has become a valuable asset to the band’s persistent touring. “Instead of being consumed by the responsibility of the restaurant, we got consumed with the opportunity of being a band.”

“Our goal is just to melt people’s faces,” Qualley said with an affable grin, “We just like to shred. We like to rock and we like to have a good time.” The band brings an eclectic energy to the stage unmatched in the Rocky Mountain region today. They follow a simple formula, which is proven bliss: “We try to embrace each other as individuals and concoct that into something larger than ourselves,” said Qualley. The free flowing positive energy on stage is natural between good friends, allowing them to focus. “The longer we do it the more fun it gets. As long as we’re having fun we are going to keep doing it.”

Oakhurst started life almost as an accident. “It really just started with a basement jam session,” Qualley said. Oakhurst has seen a number of lineups, instruments, tours, musicians, albums and interpretations. “When the bluegrass instruments started creeping in then it really sent us in a different direction,” he explained. “It’s like rock and roll with bluegrass instruments. You take a string band, swap out the fiddle player for a drummer and off you go.” He elaborated on the distinct advantages of the band’s makeup, in particular the relationship between Adam Smith on mandolin and Zach Daniels on banjo. “It’s like a dichotomy between those two on every level that is very effective. They push each other, battle on stage and it’s really added a lot to what our show is.”

He explained too that Adam Smith’s electric guitar work (in addition to mandolin) has really helped expand the sound of the group. “It used to be a lot heavier dose of guitar, these days it is kind of an ace up our sleeves. We switch over and throw him on guitar and let him freak out. He gets it all bottled up and we just let him go off,” Qualley said.

The boys will scamper through the ski towns before playing Denver, and then head east leaving the foothills far behind. They will tour across the country, ending up in Florida where they will run out of road.

Then it’s off to sea once more on one of Sixthman’s Rock and Roll cruise ships. “This guy Andy who did the first Rock Boat spotted us playing in a glass elevator, just pickin’,” Qualley recalled, smirking at the circumstances, “We did all five of the cruises last year, and they were all back-to-back-to-back.” While the work schedule is overwhelming, Qualley said it beats the heck out of the typical festival scene. “An actual room, nice bathrooms everywhere, nobody stinks, everyone’s showered, you get to go to tropical islands during the day and then you come in and just rock,” he said.

The vacation on the clock is only the tip of the iceberg. Qualley explained the diplomatic approach the band has taken as they set sail on the high seas. “You got Skynyrd on one boat, you got Barenaked Ladies on one boat, John Mayer on the next and then Lyle Lovett,” he said. “All these people that liked all of these different bands, all somehow seemed to like us.” And a swift quick kick in the teeth to the unsuspecting is tough to forget. “Whenever we go anywhere in the country somebody shows up from Rock Boat.”

Relationships with fans are complemented by those with the other artists. “Now we have friends all over the country,” said Qualley, “and we have opportunity to play with bands that are a little further along. It’s great.”