Trending Stories from The Marquee
You are at:Home»Features»Rev. Horton Heat tone it down but still turns it up on recent tour
By Marquee Magazine on February 1, 2009 Features, Interviews 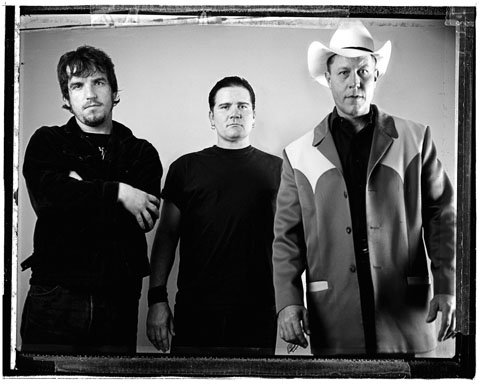 After hitting the last button of his phone number and cautiously placing the phone up to my ear to hear its first ring as it traveled en route to meet the surely mad guitarist of Reverend Horton Heat, fictitious mental images of this infamously untamed three-man punkabilly wrecking crew on stage in a saloon-esque environment blowing fire out of their mouths, diving off their drum kit and sliding down the bar while spilling drinks and shattering glass all over the joint … overtook my mind. Luckily, just before the roof collapsed and the screaming masses in my mind fled the burning building in a stampede of panic, he answered the phone.

“Hello,” the voice said, in a dreamy, lackadaisical voice heavily laden with a cozy Texas drawl. “Jim, how the hell are ya?,” was all I could think to say. As it turns out, Jim Heath, guitar-man for Reverend Horton Heat, was doing just fine, relaxing and getting ready for a show in Portland, Maine. This month when the good reverend and his two deacons (Jimbo Wallace, upright bass; Paul Simmons, drums) thump their psychobilly bibles on the Colorado stage, you might not see the life-threatening antics of yesteryear (or of my imagination), but you can definitely expect the still wildly-driven, shit-slinging rockabilly fallout that these Lone Star caballeros have been delivering for years now.

“We’ve settled down quite a bit now. We simply had to for the sake of personal injuries,” Heath told The Marquee, referring to some broken ankles suffered from jumping off of things, some split noggins from, again, jumping off of things, and Heath also reminisced of taking the act through the crowd, out the doors and into the street, still picking away as a late-night traffic jam collected and horns started blaring.

Heath was born in Corpus Christi, Texas, in 1959. Growing up, country music was an ever-present influence coming most directly from his immediate family. Johnny Horton, the famous Texas country music singer whose surname the band took for its middle name, was an enormous influence on Heath, as was Texas bluesman Freddie King. Heath is a lucky man, but also has always been a determined chap who knew what path his life should take after he made the fateful decision to piss on college — and then watched the whole thing be realized, bearing fruit early.

The University of Texas was not the place to be for Heath. Though his area of study was business (he thinks), a sweet and glorious nectar named beer had a lot more to do with Heath’s college life than overhead and capital. But before his briefly-lived college days, even back at Corpus Christi Ray High School, Jim Heath was already shelling out tunes and making southwestern girls squeal. And, it should be noted, making some nice bread on top of it.

“I just always knew I could make money on it,” Heath said, after being asked about his decision to drop out of college and follow the musical path. “Even back in high school,” while playing with the cover band Southern Comfort, “we were making money at it. Playing a prom, playing as many local and not-so-local dances as we could, I had good signs of promise from early on.”

Heath married young and fathered a child, but instead of getting a “real job” he upped the ante of his music. “Well, I sort of just did the opposite of what people normally do,” Heath explained.

“Instead of hanging it up for a normal job, I decided that it was time to really get crackin’ on the music. Like I said before, I just knew I could make money at it, and it’s what I was gonna do.”

Rev. Horton Heat will be supported on this tour by Denver-based Slim Cessna’s Auto Club, which last year released Cipher.