Trending Stories from The Marquee
You are at:Home»Features»Susan Tedeschi’s role of matriarch in first family of the blues a juggling act
By Marquee Magazine on February 1, 2009 Features, Interviews, Timothy Dwenger 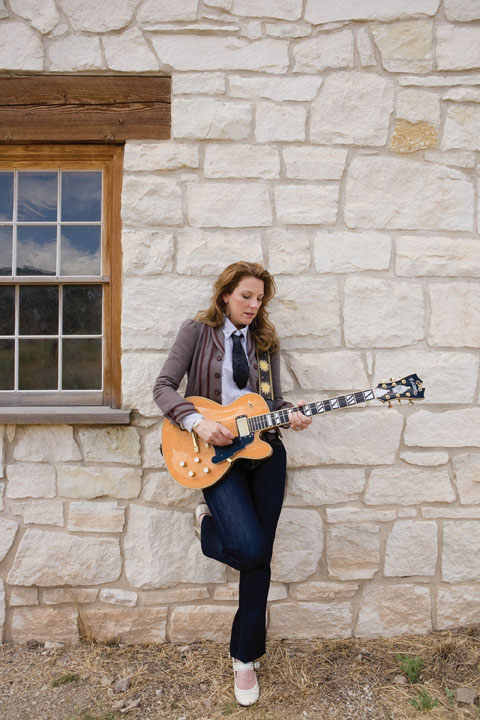 If there was a first family in the world of the blues it would have to be the Trucks/Tedeschi family. Susan Tedeschi is riding high as one of the top female blues artists in the world and her husband Derek Trucks is at the top of his game, playing with The Allman Brothers Band, his own band and the project that he and Tedeschi started to keep their family together in the summers, Soul Stew Revival.

Interestingly enough, it is that band, Soul Stew Revival, that was invited to play at Barack Obama’s inauguration last month, just a few days after The Marquee caught up with Tedeschi at her home in Jacksonville, Fla. “It’s incredible; it still doesn’t even seem real. I can’t even picture it,” she said in her sweet southern drawl when asked how it felt to be part of such an historic event. “It’s exciting. We are going to get to go to the inauguration during the morning and then that night we’ll play at one of the balls. As everyone knows, it’s not just any inauguration. It is such an historic event and it really symbolizes such a great time in our country. We seem to be overcoming some of our past mistakes.”

As Tedeschi revealed later in the conversation, they didn’t get to play just any ball. She and her husband got to headline their own ball, The Southern Ball. “We were supposed to play with The Dead but we couldn’t fit all of our gear on the same stage, so that’s when they said, ‘Okay, we’ll give you guys your own ball.’ I was like, ‘What? … well okay, cool!’”

Though Obama supporters from the beginning, Tedeschi said that they first became personally acquainted with the Obama campaign team when Trucks was playing a gig at Red Rocks just after the Democratic Convention here in Denver came to a close. “They were very sweet and very positive and they said, ‘Keep January 20th open because if we get in you are going to come and play.’ We were like, ‘Yeah right,’ but sure enough here we are.” Though Mr. Obama didn’t make it out to Red Rocks for the gig that night last August, the press reported that President and Mrs. Obama did, in fact, make it to all of the official balls on the night of the inauguration, so hopefully Tedeschi & Trucks got to play for them after all.

While they live in very different worlds, the Tedeschi/Trucks family does have one very significant thing in common with the Obama’s in that both families live very public lives with relatively small children. The Obama daughters, Malia and Sasha, are 10 and 7 respectively, while Tedeschi’s children are 6 and 4 and it’s a safe bet that they face some of the same obstacles when it comes to raising them. The Obamas have the good fortune of Michelle’s mother accompanying them to Washington, while Tedeschi has Truck’s mother nearby to help her get through daily life.

“Derek’s mom is my full-time nanny,” said Tedeschi. “She comes out during the week for a couple hours a day and when I go out of town then she will stay here with them and get them off to school and do all that kind of stuff. And my sister-in-law and brother-in-law also work for us. Derek’s brother David has been really instrumental in making this happen for us and is sort of the handy man around here. He even helped Derek build our studio in the back yard. So without family we really wouldn’t be able to get it all done.”

That fact extends from family life through to Tedeschi’s work. On her most recent release, Back to the River, she traveled all over the country to work with high profile songwriters, ranging from Louisiana swamp rock legend Tony Joe White to The Jayhawks’ Gary Louris, but after several months of writing she returned home and was able to wrap things up with the help of her husband. “I brought the band here to the studio and Derek and Doyle [Bramhall III] were around and they ended up helping me finish ‘Talking About’ and ‘Butterfly.’ I had most of the songs written but they both wrote a bridge and threw in some hooky chords,” said Tedeschi.

Back to the River has done very well for Tedeschi, taking her to #1 on the Billboard Blues charts and setting huge expectations for her national tour this winter. In fact, she expects to spend much of the year on the road promoting the new album, with a potential break for a recording session that she talked about a little, even though it wasn’t confirmed. “We are going to try to record a record with Soul Stew this year but it probably won’t be till late summer or fall,” she revealed. “It just depends on how both of our calendars come together.”

So it seems that being the first family of the blues isn’t as easy a life as one might think.  Schedules are jumbled, family life is stretched thin and even finding time to record an album as a husband and wife team is difficult.  “It’s all been a very interesting experience. I don’t know how we pull it all off. I guess it is because we love it so much!”

Recommended if you Like:
• Keb Mo
• Bonnie Raitt
• Janis Joplin