Trending Stories from The Marquee
You are at:Home»Features»Akron/Family settles in as a trio and road tests newest CD Set ‘Em Wild, Set ‘Em Free
By Marquee Magazine on March 1, 2009 Features, Interviews, Timothy Dwenger 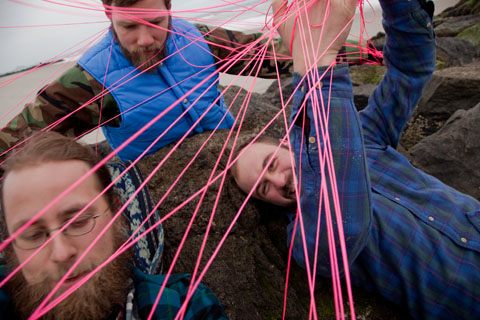 Yes, it’s spelled correctly, that’s a forward slash between the words Akron and Family and that’s the name of one of the more eclectic folk rock bands playing today. It’s an admittedly odd way to name a band, but drummer Dana Janssen shared the back story during a recent interview with The Marquee from the steps of his favorite coffee shop in the Williamsburg section of Brooklyn.

“We wanted to avoid having a ‘The’ in our name because at the time Williamsburg was notorious for The Strokes, The Yeah Yeah Yeahs, ‘The’ whatever,” said Janssen. “Every band was ‘The’ something and we didn’t want to be lumped into that group just because we were from the same neighborhood,” he said. “Seth’s mom actually came up with the idea. It gives the name a different depth and dynamic and we thought it was pretty cool.”

Those familiar with Akron/Family may remember them as a quartet. However, back in the fall of 2007 founding member Ryan Vanderhoof left the band to pursue other interests and the group has soldiered on as a trio. Their new record, Set ’Em Wild, Set ’Em Free, is their first in this configuration and Janssen shared his thoughts about the band’s new direction. “In some ways I miss what Ryan brought to the table, but in other ways we moved through things on this album with a certain ease of passage that we haven’t experienced before,” he said. “With just the three of us it was a lot easier to have the room to express our ideas and to flesh out some of the songs further than we otherwise would have been able to. I think we are really proud of this record and I am really excited to share it with everybody.”

On Set ’Em Wild, Set ’Em Free, Akron/Family continues to blend pastoral folk music with experimental psychedelia to create songs that can just as easily explode into a Flaming Lips-esque wall of sound as float to conclusion with deft finger-picking and tight harmonies. “We all have kind of a psych-rock sensibility at times,” Janssen said as he described the band’s music. “I would say our music falls somewhere between Fela-Kuti, the Grateful Dead and Fugazi.” The unpredictable song structures make for an album that is brimming with energy and a set of songs that should transfer very well to the stage.

In concert, the band has always reveled in the fact that they have been able to harness the energy of the room and envelop the crowd in the experience. “We’ve always had the collaborative spirit since we started and we love playing with people and inviting them up on stage with us,” Janssen said. “Back in the early days we would always bring the crowd up and give them random percussion instruments to shake and destroy.”

When they shrank to a trio, Janssen and his bandmates decided to rely even more heavily on their collaborative spirit to round out their sound. Instead of adding permanent members to their touring band, Akron/Family has made a practice of inviting other bands to join them on stage as part of an ever changing ensemble. While the band’s three core members hold the songs together, they encourage improvisation from everyone on stage that often results in cacophonous onstage jams.  “After we lost Ryan, we had a tour booked and we had to think about what we were going to do,” Janssen said. “We called on our friends Megafaun from North Carolina and had them patch up the band by joining us and making it a seven piece.  Since then we’ve really gotten into the idea of playing with a bunch of different people. On this tour we’re hoping be able to do some more of that with the opening acts.”

Though Set ’Em Wild, Set ’Em Free won’t see the light of day until May 5, Akron/Family will be offering fans a sneak preview of material from the record during a brief tour that brings the band to intimate venues across the U.S. and Canada in March. “We haven’t really been doing much touring lately and we just wanted to give people the opportunity to see us in an intimate setting because next time we come through town it will probably be in a much bigger room. This gives people the ‘personal touch,’ as it’s a lot easier to reach out and connect with people when they are five feet away rather than on the other side of a huge ominous stage,” Janssen said. “It’s been almost two years since we released a record and we want to generate some attention and momentum and build a buzz, as they say.”

When they land here in Denver they will be taking over The Oriental Theater with Young Coyotes, Pee Pee, and Hawks of Paradise on St. Patrick’s Day, before heading on to SxSW in Austin to share their new songs with a who’s who of the music industry.

Recommended if you Like:
• Fleet Foxes
• Grizzly Bear
• Bon Iver