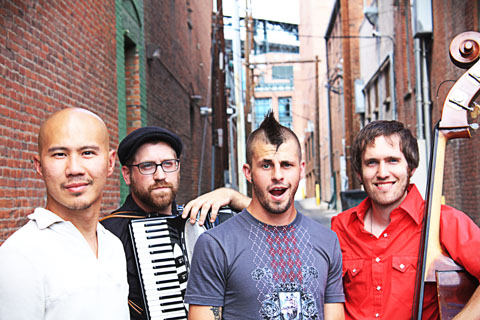 The tiny room buzzed with creativity and energy when The Marquee joined the Boulder Acoustic Society at Macy Sound Studios for a mixing session for their upcoming CD.

Grammy winning producer John Macy manned the board while band members analyzed the accordion swell in a tango written and sung by violinist Kailin Yong. A megaphone was propped in the corner — at the ready whenever one of them might need to run into the sound room and add some new accent to the already eclectic mix. Their goal in this recording is simple: they want the songs to sound real — not digital. At one point as they listened, bassist Aaron Keim remarked, “That sounds too much like modern jazz — and not enough expressive us.”

Boulder Acoustic Society has changed in more ways than one since they placed second in the 2006 Telluride Bluegrass Festival band contest.  They swapped out two band members in January, 2007 to reach the current lineup and now the band is Keim on ukulele as well as bass, Scott McCormick on accordion and ukulele, Yong on ukulele as well as violin, and Scott Aller on spoons, washboard, hand drums, snare, and cymbals. And for this most recent recording, all of the band members share vocal duties.

Aller characterized their music as elegant, edgy, and having the grace of chamber music with the edge of punk rock. “We are modern roots, and the new wave of folk, and we give a kick-ass spin on American roots. I think our differentiator is our instrument lineup and energy. We really put on a rock show using non-traditional instruments.  Scott McCormick runs across the stage sometimes — the audience feels like they are at a rock show and they can tell that we love what we do,” Aller said.

The natural sound is a critical aspect for this newest CD, The Punchline We Live By. Aller explained that they felt their previous recordings sounded too polished and mechanical. During this mixing session the band listened closely to every little phrase and made decisions to leave static, pops, and crackles in the songs. At one point they noticed the sound of faint voices at the beginning of the tune — not quite loud enough to discern the words. Instead of eliminating the extraneous noise, as many would have done, they decided they liked it and wanted more. Keir headed into the recording room with the megaphone and whispered some more sentences for background. The guys liked the creepy effect and the atmosphere the whispers added. And so it went on.

Currently, the band spends their mixing days repeating the process over and over; they take some songs home to listen to at night and return to the studio with more feedback for their work with Macy.

Each of the BAS members writes music and as a group they are focused on producing original, game-changing work for the upcoming record.  Aller hesitated only for a moment when asked about an original song that is important to the band. “I don’t really want to talk about my own song … but … I have my first tune on a BAS album. It’s a somber song that has a lot of underlying meaning to myself and the other band members. I never sang on a CD before. Each of our songs means a lot to us. We work really hard at them to make sure we are comfortable and proud of them. Punchline is about how fortunate I am not to have experienced many different things in life,” Aller said. The song is thoughtful and reflective and well worth the pride he feels in it.

Boulder Acoustic Society has a big year ahead.  They will release The Punchline We Live By mid-year on their new label, Nine Mile Records. “We are looking forward to the incredible growth this year will bring,” Aller said. “We will have much greater resources in terms of marketing and distribution.”

BAS hits the road during the spring and summer, touring the southeast U.S. on four different occasions for big festivals in North Carolina and Tennessee. Aller is already revved up for the travel. “We have a lot of friends down there — people get our music. In North Carolina, people know how to throw a festival.”  In the fall they will travel to the U.K. for their first overseas trip.

Recommended if you Like:
• The Avett Brothers
• Decemberists
• Old Crow Medicine Show