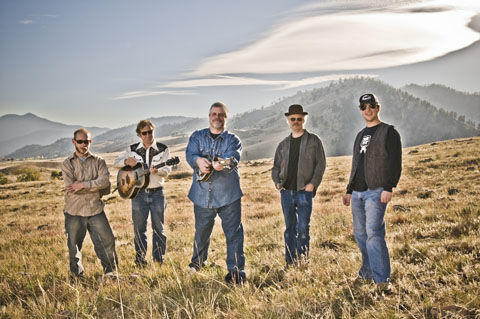 Great American Taxi plays Americana music. But strip that genre away and you’re still left with a band that is so undeniably American that it’s like a Corvette made out with a Ford F-150, and the result was Taxi.

Slick and fast in some places and slow and powerful in others, the group, its founding members say, is a “blue collar project” that blends as many different items together as that other staple of American life — the hot dog — does.

Great American Taxi recorded their latest album — the band’s second — Reckless Habits, this winter and will be releasing it this month in grand style, accompanied by the Black Swan Singers of Denver and the Peak to Freak Horns. “We didn’t think anybody would be able to relate to the title,” laughed lead singer and guitarist Vince Herman during a recent conversation over burgers with The Marquee. “It’s actually from a song I wrote about Gram Parsons,” added fellow founding member and Taxi keyboardist Chad Staehly.

It wasn’t clear right then, but later I came to learn that each of their statements had just perfectly summed up the newest album — light hearted and funny in some parts, sentimental and doctrinal in others. A huge element of that makeup has to do with the band members’ pasts, and what each brings to the table.

Taxi’s new drummer, Chris Sheldon, brings the jam world with his foundation as a member of the Phish tribute band Phix, while Staehly and bassist Edwin Hurwitz follow suit from their work with John McKay Band and Shockra, respectively. Herman, of course, brings newgrass to the mix from his time as a founding member and still co-leader of Leftover Salmon. And new guitarist Jim Lewin brings jam band sensibilities as well as a background from the Bakersfield honky tonk circuit and the band Harmony Grits.

The writing credits on Reckless Habits are split pretty much down the middle between Staehly and Herman, with Lewin contributing a song as well. “We haven’t really even gotten into the material that Jim writes, and Chris writes songs too that we haven’t tapped into,” said Staehly. “Reckless Habits is material we’ve been touring with for the last year-and-a-half since Streets of Gold. A lot of this stuff got written right after Streets of Gold was put out. And that’s what we do. We road test it for a year-and-a-half and let the arrangements fall into place and then we go into the studio and we put some glitter on it.”

The album was recorded at a new studio on the Front Range, Backbone Studio in Loveland. Herman said that the studio itself played a role in the recording, not only because of their huge collection of vintage mics, amps, pianos and guitars, which the band took full advantage of, but also because of the studio’s structure. “It’s not a free-for-all kind of studio where you can go nuts and stay up until seven in the morning. But that kind of discipline I think really ended up being pretty good. We’d start at 10 in the morning and be finished by midnight. Then we had time to go over and listen to the stuff we did that day and figure out what we were going to do tomorrow, get a good night’s sleep and get back to it,” Herman said.

The album was produced by Railroad Earth’s Tim Carbone, and Staehly said that in addition to a history of collaborations and friendship with Carbone, a big decision in their choice to bring him on was Railroad Earth’s album Amen Corner. “When they released that album last year we listened to it in the car all the time,” Staehly said.

And while the digital world is crushing record sales, the Taxi is planning some value added packaging for Reckless Habits that they hope will entice people to actually buy the product. “We’ve hired Greg Carr, an artist from Denver who does packaging with stuff unlike anything you’ve ever seen. It’s die cut with crazy cardboard pop-ups,” Staehly said. “We want to give people something so they won’t just burn it and pass it on. We want them to take a burn and look at the packaging and see what’s happening.”

Recommended if you Like:
• Gram Parsons
• Flying Burrito Brothers
• The Byrds