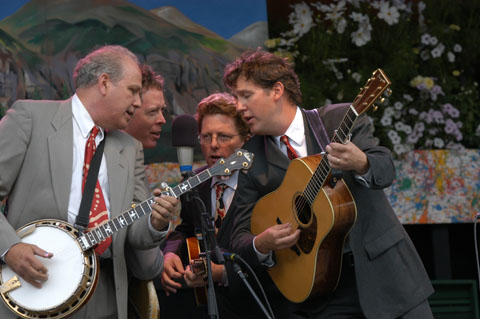 Deep down in the valley of time there existed a near-fantasyland called the Denver Folklore Center. Thousands of musicians passed through this hub and four of them got together in 1978 to form Hot Rize, named after the leavening product in Martha White flour products — an apropos moniker since the band rose well beyond expectations.

Founding members Pete Wernick, Tim O’Brien and Nick Forster graciously took time to speak with The Marquee as they got set to celebrate their 31st year together at Swallow Hill’s 30th anniversary soiree, and to tell the tale that has become legend.

Forster set the scene: “Six contiguous storefronts, 30 people working every day. There was a performance hall that held 100 people on the end, the next storefront was the repair shop where I worked. The next two storefronts were the music store where (now departed Hot Rize founder and flat-top guitarist) Charles Sawtelle was the manager. Then there was the bead shop for all of your ‘beading’ needs. Then there was a record shop where you could buy all of the records that you couldn’t find at the chain stores. The last was the music school,” Forster said.

O’Brien recalled, “We coalesced around the Denver Folklore Center. Pete and I were music teachers. That was a really vibrant place in the mid ‘60s.”

“Pete booked five nights at the Ramada Snow King in Jackson Hole, Wyoming,” Forster explained. Wernick’s bassist bailed at the last minute and an interesting phone conversation ensued. “So I got a call from those guys saying they need a bass player. And I said, ‘Yeah but I’ve never played the bass.’ They said, ‘I know but you’re a good musician,’ and I said, ‘Well I don’t have a bass.’ They said, ‘Oh that’s ok we’ve got a bass.’ Literally the next day we got into the 1969 Cadillac and drove to Wyoming. It was a really good bonding trip. Something happened on that trip that was really positive,” Forster said, describing the first Hot Rize show with the lineup that remained for years.

“We had some different skill sets that were all becoming apparent right off the bat,” Forster said. “I ended up being the principal driver for the band. Charles and I were the mechanics; we could fix stuff. Charles was really good at the PA system and Pete did all the booking in those days. Tim was thinking more about material and arrangement. I did a lot of the concession stuff and merchandising. It was a remarkable combination of four really different, capable people who were all willing to work hard.”

While Hot Rize is a very traditional act in some ways, they also weren’t afraid to take that tradition and bend it — sometimes heavily, to fit their needs. “Hot Rize is very aware of and respectful of the roots of bluegrass and made not just occasional but constant references to the original bluegrass sounds,” said Forster. “We held very true to the values of bluegrass with the instrumentation and the stylistic characteristics. We wrote our own stuff but most of what we wrote sounded like it could be old.” Wernick went on about a minor mix-up, “In fact, Ralph Stanley even recorded one of our songs and on the record the authorship was noted as ‘Traditional,’ except that it was written by Tim and Nick. It was written to sound like an old song and we fooled Ralph Stanley,” Wernick laughed. “I’ve been around for a lot of bluegrass history and by that time I was already really into it. There is a real continuity from the early days.”

The roots run deep for Hot Rize and their music is included on the list of every relevant bluegrass musician that has picked a tune in the last few decades. And again, while they had that firm grip  on tradition, elements of the past that didn’t suit them were cast aside,  including the use of an electric bass rather than the standard stand-up acoustic.

Bassist Forster explained: “Pete preferred the sound of the electric, actually. From a practical perspective it made a lot more sense for us traveling. We could fit all of our instruments and our luggage in the trunk of the Cadillac.”  Wernick recalled, “Nobody ever said Hot Rize was not a bluegrass band, but we always used an electric bass.”

For more than 30 years now, Hot Rize has forged ahead on their own road. The scenery of the band has changed but it’s still a great view, and this month those members will perform a show that gives nods to their roots, and the community that they continue to be such an integral part of.
Hot Rize is gathering back in the city where it all began this March 28 at the Ellie Caulkins Opera House at Swallow Hill. O’Brien explained, “It is a benefit for the Swallow Hill Music Association. They represent the movement that we are into,” he said.

Forster further described the connection to The Denver Folklore Center. “The Music Association of Swallow Hill basically built their model on two of those six storefronts. One was the performance hall and the other was the music school,” he said. “They took a percentage of what the Folklore Center used to be.”

Forster also explained that Swallow Hill’s studio came to them after Sawtelle’s passing. “When Charles died and I was the executor of his estate we worked out a deal where Charles had a recording studio which we donated to Swallow Hill. That became the basis for Swallow Hill’s recording environment in their facility down on South Broadway,” Forster said.

After Sawtelle’s death Hot Rize put it down for a few years to pursue solo careers. When they decided to come back there were big shoes to fill and a plethora of candidates. They eventually chose Bryan Sutton. Boasting a resumé which included time in Ricky Skaggs’s Kentucky Thunder and the International Bluegrass Music Association’s 2000 Guitarist of the Year, Sutton filled the spot perfectly.

“Tim is the next youngest in the band and they are twenty years apart. He grew up seeing us,” Wernick explained. “Bryan’s job is to sound good with us and make us sound like a viable band. That does not mean he was ever expected to replicate Charles’s solos, although he could. Bryan and Charles are not that similar as musicians, but they are both a good fit for the sound of Hot Rize.”

The only other date on Hot Rize’s calendar is the 2009 RockyGrass, which is rumored to include a rare appearance by Red Knuckles and The Trailblazers — a band steeped in mysticism, which some people claim are, in fact, the members of Hot Rize in costume.
Even O’Brien said that Red Knuckles and company are a bunch of crazy people. “The Trailblazers are a Western outfit. Literally. We leave the stage and these other guys come out and they play Western swing music and dress like cowboys with sunglasses on. They play honkytonk music. It’s good music but they are whacky people,” O’Brien said.

Hot Rize  has endured for three decades and Wernick, Forster and O’Brien have become family to one another. “When a relationship has lasted more than half of your life with other musicians and you get together and you still play together and play songs that you started playing together over thirty years ago, it’s hard to describe but it is like a family,” Wernick said. O’Brien concluded, “This music that we play together never really goes away from our brains or our heart and soul. It’s all part of who we are.”

Recommended if you Like:
• Flatt and Scruggs
• Newgrass Revival
• Bill Monroe