Trending Stories from The Marquee
You are at:Home»Brian F. Johnson»Portugal. The Man wraps up another album already and sets sights on ‘roo
By Marquee Magazine on March 1, 2009 Brian F. Johnson, Features, Interviews 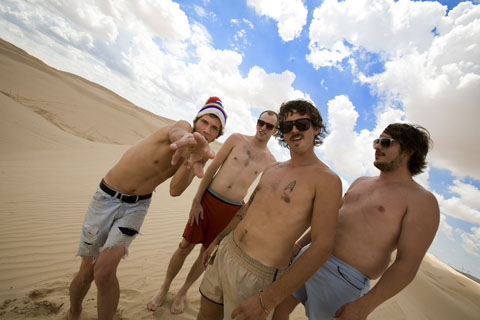 Portugal. The Man released its latest album in September of 2008, but when The Marquee caught up with lead singer, guitarist and vocalist John Baldwin Gourley in late February, the band had just come out of the studio after recording yet another CD.

“We had the time and it was one of those things where we might as well make a record now if we’re going to be gone all summer,” Gourley laughed in his humble, shy demeanor.

The Portland-based indie quartet took a new direction on that as-of-yet-unnamed recording, and Gourley explained that for the first time, the band spent a lot of time in pre-production. “I got so nervous going in there with Paul (Kolderie). He’s done everything, like Radiohead and the Pixies. But it was crazy sitting down and doing this album and doing the pre-production because I understand how really difficult it is to sit down and write songs. You don’t just do it and throw it all out there,” Gourley said.

That’s in sharp contrast to the way Gourley and his bandmates approached last year’s Censored Colors release — in fact, it’s 180 degrees opposite.

The album, which was later picked as one of 2008’s “10 Essential Albums” by Alternative Press magazine, was recorded over a two-week period. “I don’t know what we were thinking going in,” Gourley laughed again, about the recording schedule on Censored Colors. “It was so intense. After the first three or four days, I looked at it and realized that we had to write a song a night to even fill out an album.”

Now, six months later, with another album already in the bag, Gourley said that he and his band hope to continue releasing records as often as they can. “I look at it like building a house, which is what my family does,” the Alaskan born and raised Gourley said. “They build houses and they build multiple houses a year. It’s just something that we do. Our job is writing songs, so why shouldn’t we just keep writing songs and putting them out?”

For the latest album, which he said may come out this summer, Gourley wanted to stick to a much different setup than the eclectic act has had in the past. “We really wanted to go for that classic Motown song structure. We talked about ‘Ain’t No Sunshine’ basically the whole time, and none of the record came out like that, but we were writing those song structures, and they are so much more complicated than it comes off,” he said.

While all of that makes for a good story, the really amazing things is that Portugal. The Man is even a band at all. “I really had no intention of ever getting up in front of people. I’m terribly shy and I never wanted to do anything that would make me stand out in any way,” Gourley said. But in the fall of 2002, his friends in the band Anatomy of A Ghost, called him to help sing on their album. He left Alaska for Portland and went through a fast, but brilliant whirlwind with Anatomy. “That band was signed within a month of my moving and everything went kind of quickly,” he said, adding with a laugh, “but it was over as soon as it started. We had no idea what we were doing and we didn’t get guarantees for our tours and none of the shows paid us. It was the craziest thing to look back on it now. We just went out and did it.”

When Anatomy of A Ghost disbanded, Gourley and Anatomy bassist Zach Carothers formed Portugal. The Man. The band has its own label, which operates in conjuction with Equal Vision Records, which is another amazing part of the group since even Gourley laughs at what a joke record sales are. “It’s obvious when they (Equal Vision) do a deal with us it’s because they just like the music. We watch our album sales drop significantly with every album that we put out,” he said. “But there are more people at our shows. I think the whole thing is kind of a joke at this point.”

That may be a self-fulfilling prophecy, though, for Gourley, since every time the band has recorded an album, they have also released that album for free on the internet. “Downloading has just become so accessible and easy to do. So we’re going with it instead of trying to fight it. I’d just rather somebody have the music,” he said.

That lax attitude may be contrary to the ways of old in the music business, but Portugal. The Man isn’t taking any knocks on the chin for it. In fact, they just keep getting more attention, and it was  just announced that the band will this year play summer’s ultimate mega-festival — Bonnaroo. With his characteristic chuckle, Gourley said he’s blown away by the offer to play there, and summed it up with, “Holy shit. It’s so cool.”

Recommended if you Like:
• TV On The Radio
• Fleet Foxes
• Mars Volta