Trending Stories from The Marquee
You are at:Home»Features»The Bad Plus adds a vocalist for their latest album and tour For All I Care
By Marquee Magazine on March 1, 2009 Features, Interviews, Timothy Dwenger 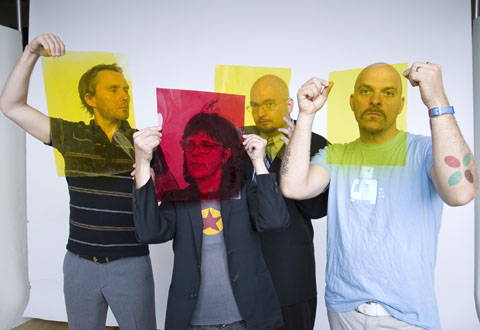 Are they a jazz band with a rock and roll problem or a rock and roll band with a jazz problem? Some say they walk the line between the two while others say they have created a dynamic new genre. Whatever the consensus, it is clear that The Bad Plus is pushing the sonic envelope all over the map.

While primarily an original band, according to their drummer Dave King, they have covered everyone from Abba to Nirvana since they formed in 2000. Black Sabbath’s “Iron Man,” Blondie’s “Heart of Glass” and Wilco’s “Radio Cure” may seem like strange cuts for a jazz trio to cover to purists out there, but King was quick to defend his band’s choices in a recent interview with The Marquee as he boarded a plane to Poland.

“We are celebrating the idea of the ‘new standard,’” he said. “The jazz standards of the American song book were all pop tunes of their time. We feel this is a part of the tradition of jazz and we don’t want to ignore the music that was important to us on some level as we were growing up. We are continuing the idea that pop music is available to improvise on and can be really creatively rewarding.”

Though covers have been a mainstay of their repertoire since the beginning, King and his musical foils, pianist Ethan Iverson and bassist Reid Anderson, worked exclusively as an instrumental band until they teamed up with a smoky voiced vocalist for their recent release For All I Care. “We had done five studio records as a trio and it is a jazz tradition to have some sort of sitting-in scenario or special guest thing,” King said. “We tossed around the idea of another instrumentalist that we respect but then we started thinking, ‘why don’t we go all the way and do a vocal record?’ One of our favorite records is the John Coltrane, Johnny Hartman record, where The Coltrane Quartet worked with a singer. What we love most about that record is that it is still the Coltrane Quartet; it’s not a band backing a singer. It is a true collaboration. We felt like having a vocalist come in who is a true ensemble player would follow that tradition. We just wanted to flesh out some tunes in a new way with a vocalist who is very daring and not an ego type. It’s really been fantastic.”

The daring vocalist who fits in with this off-beat trio so well was a stranger to most outside of the northern Midwest. “When we were first tossing around ideas for singers, we were tossing around big names and then we thought that wouldn’t work because it would be viewed more like we were backing someone up. So we started thinking of great singers that we knew that were unknown in an international way. Immediately Reid, who was a fan of some arty experimental projects I did with Wendy Lewis in the mid-Nineties in Minneapolis, said, ‘What about Wendy?’ I thought it was a perfect idea. We had remained friends over the years and I contacted her and she was up for it right away and it gelled immediately,” said King.

As the project got underway, Lewis became a sort of fourth member of The Bad Plus. She brought a list of songs to the table that she wanted the group to consider for the album and she helped to arrange some of the material around her vocal ideas and strengths. “The three of us started deconstructing the songs and vibing out the vocal and then we brought Wendy in and started rehearsing with her and she just fit right in,” said King. “She came up with several great ideas, like singing ‘Comfortably Numb’ with that sort of talking verse, so it was really a collaborative effort,” King said.

Now that the record is in the can and has hit shelves in both Europe and the U.S., the band is back on the road and they decided to bring Lewis along. “We open the show as a trio and play about five or six tunes before we bring her on,” said King. “She isn’t out in front or behind us, she’s set up right with us. It’s all pretty mellow. We are trying to retain as much of what people know of The Bad Plus as possible.”

So whether you are a rock and roll fan who loves the lyrical intricacies of Jeff Tweedy and Kurt Cobain or a jazz cat with a taste for complex instrumentals in strange time signatures, The Bad Plus will cover the bases when they hit the stage.

Recommended if you Like:
• E.S.T.
• Medeski, Martin and Wood
• Happy Apple