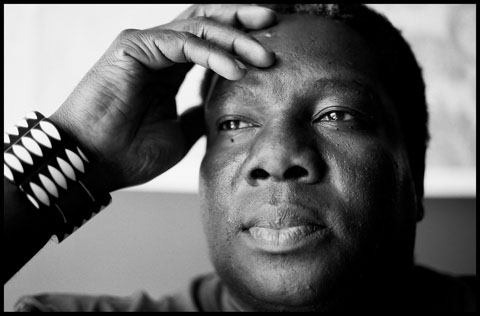 As an American, it can be difficult to understand just how fundamental music is to African culture. Such terms as “world music” or even “African music” betray a fundamentally Western viewpoint which often links music to entertainment. But as Kolby Morris, senior member of the University of Colorado’s West African Highlife Ensemble, points out, the American penchant for categorization is often lost in translation when one becomes immersed in a culture where rhythm is as common as the seasons.

“In Ghana, there’s no specific word for ‘music,’” Morris said in a recent interview with The Marquee. “It doesn’t translate because music is so ingrained in daily life. Music is life. It’s inseparable.”

Professor Kwasi Ampene, who founded, directs and choreographs CU’s ensemble, explains that even a term like “West African music” is misleading. “There are over 50 languages in Ghana alone,” Professor Ampene recently told The Marquee. “So if people have a distinct language, that means they have a distinct culture from their next door neighbor. That’s what a lot of people don’t understand about Africa. It is so diverse.”

Luckily, Professor Ampene has enlisted the help of roughly 30 CU students for the 9th Annual West African Highlife Concert, which will undoubtedly be an uplifting, empowering, and, above all, participatory exploration into “West African music.”

The only performance of its kind in the United States, the Highlife Ensemble show goes well beyond a typical concert by integrating the traditional rhythms, melodies, and dances which are inherently inseparable from the Afro-pop styles of Ghana, Nigeria, Cameroon, Congo, and beyond. And if that weren’t enough cause for celebration, this year the ensemble will have the privilege to host the renowned South African songwriter, poet, singer, and multi-instrumentalist, Vusi Mahlasela.

Due much in part to his stand-out appearance in the 2003 documentary Amandla!: A Revolution in Four-Part Harmony, Mahlasela’s extraordinary life is taking on new relevance for American audiences. Having begun his artistic career as a poet during the struggle against South Africa’s separatist, white government in the 1980’s, he has come to embody not only the struggles and triumphs against apartheid that defined the country for so many years, but also the need for reconciliation and vigilance that continues to this day.

“There’s been quite a lot of progress in South Africa, but quite a lot of challenges,” Mahlasela said. Beyond his extraordinary music, he has also become an ambassador for Nelson Mandela’s 46664 Foundation, a campaign to help raise global awareness of HIV/AIDS, which has reached epidemic proportions. “[AIDS] is not just a problem in Africa; it’s a problem everywhere,” he said. “Through our work we want to bring hope to the people, but also celebrate life.”

If his life is an indicator, struggle and celebration are not mutually exclusive terms, and Mahlasela has an ever expanding list of friends who have helped spread his message. He is currently on tour with Bela Fleck, and his most recent album, Guiding Star, includes guest appearances by Ladysmith Black Mambazo, Derek Trucks, Xavier Rudd, Angelique Kidjo, and one of his biggest fans, fellow South African Dave Matthews, who has credited Mahlasela as “one of the most important influences of my life.”

With the Highlife Ensemble, audiences will get the chance to experience this spirit of community down to its roots. Beyond its concerts, the Ensemble has traveled extensively, performing public outreach and educating young students across the country. “We stress this communal aspect of our heritage,” said Professor Ampene. “It’s not just music. Most of our students are playing leadership roles across the United States because of the educational enrichment they are gaining.”

Of course, in the end, it all comes down to celebration of life, and everyone promises that audiences will play just as much a role in the performance as the musicians, singers, and dancers. “Students put in such hard work and they get to taste the fruits of their labor in such a way that really appeals to a lot of people at the same time,” said CU junior Aaron Fichtner, who will be playing guitar in his third Ensemble appearance. “Music contributes to the sense that they’re doing their part, being part of something that’s greater than the sum of its individual parts. Everyone can feel that, whether you’re in the Ensemble or in the crowd.”