Trending Stories from The Marquee
You are at:Home»Features»Everest gets hand-selected for tour supporting legend Neil Young
By Marquee Magazine on April 1, 2009 Features, Interviews, Timothy Dwenger 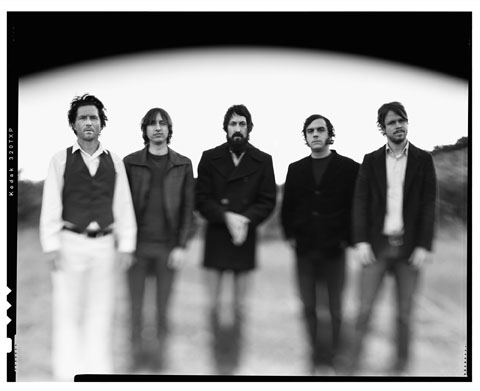 The L.A. band Everest has all the hallmarks of a true rock and roll success story — a meeting of the minds of hardworking musicians who came together not because some producer thought they would make a good band, or because they needed the money, but because they were friends who truly loved to play music together. Across the board their resumes read like a who’s who of the indie music scene, but each was still searching for the pinnacle of their careers. In a very short time the band has surpassed even the most lofty goals they had set for themselves. Not even a year after releasing their first album on Neil Young’s Vapor Records, Everest is about to embark on their third tour supporting the legend.

“Neil’s manager Elliot Roberts co-owns Vapor Records and he was excited about our album and got Neil to come out to a show. Neil was really, really positive about it, welcomed us to the label and has been nothing but supportive ever since,” said lead singer Russell Pollard, speaking with The Marquee as he drove the band’s gear up to Neil’s trucks so they could haul it clear across the continent to St. John’s Newfoundland for the first shows of the Spring tour. “When the record came out I think we thought it was an honor to be on his label and that was good enough. We weren’t really expecting to get his attention the way that we have.”

“He brought us to Europe and we did shows with him in Ireland, Belgium, Holland and I think a show in London as well,” Pollard continued. “I think that was a kind of test run for us. I bet in his mind he was like, ‘I want to give these guys a shot, I like their music, I appreciate what they do but I want to see if they can pull it off.’” Apparently Pollard and his bandmates have “pulled it off” with flying colors, as Young has personally requested that they open each of his tours since.

The experience of playing in massive 20,000 seat arenas on a bill with Neil Young and immediately before bands like Wilco, Death Cab for Cutie and, when they roll through Denver at the end of the month, The Neville Brothers, has forced Everest to step it up a bit. “I think it has changed us,” Pollard said. “The band has gotten a lot better and a lot tighter. Once you start to get used to playing in a space that big your sound naturally morphs and gets a little bigger as you get more confident staring out at that many people. Before touring with Neil we didn’t really have any experience doing that.”

The experience of being on the road with a huge production like Young’s has also given Everest the chance to focus on maturing as a band. While many young bands who are cutting their teeth on the road are playing night after night for weeks at a time, Young only plays back to back nights occasionally and as a result every day isn’t consumed with sitting on a bus and hauling gear around. “We’ve written a lot of songs together on these tours because we’ve had the time and the space to do it. Usually when we are touring on our own, we are in these little back rooms full of graffiti, warm beer and chips and salsa with room enough for half the band to be comfortable. All of a sudden we have showers that are bigger than the dressing rooms we were used to,” said Pollard.
The band has taken advantage of the huge showers in most arenas and often converts them into practice spaces of sorts, hauling in amps, a drum kit and other equipment. “The reverb in there is incredible,” he said. “That time between load in and go-time has given us the time to work on new songs. Instead of having one guy at home writing and bringing in ideas, it’s really nice when everyone is together and can be there from the conception of the idea. For most of us, when we are home we just don’t have that time.”

Though the band started out as primarily an outlet for songs that Pollard had written on the side when he was working with bands like Sebadoh, Folk Implosion or Alaska!, things seem to be evolving and the band is becoming more involved in the songwriting process. “Everybody is bringing something to the table in this band and the songwriting is starting to become a whole band effort more and more. A lot of the new stuff is parts and pieces of everybody’s brains and playing styles. It’s really super fun to play these songs. It’s really fresh,” Pollard said.

To him and the rest of the band it is incredibly important to keep things fresh and moving forward and despite being on the biggest stages of their young career together, they have refused to keep things safe. “On the last string of dates we did with Wilco and Neil, we were breaking out brand new songs pretty frequently,” he said. “I was writing lyrics on pieces of paper and on my arms so I wouldn’t forget them. That’s how new they were and it was a great feeling. Great stuff is born out of that little bit of anxiety that comes with not being totally stable on your feet. I think that some of the best performances of our songs have come when they weren’t fully developed and we were just pushing ourselves to go out and see what happened.”

Recommended if you Like:
• Wilco
• Band of Horses
• Bonnie “Prince” Billy