Trending Stories from The Marquee
You are at:Home»Features»Los Campesinos garners massive critical acclaim in their very short history
By Marquee Magazine on April 1, 2009 Features, Interviews 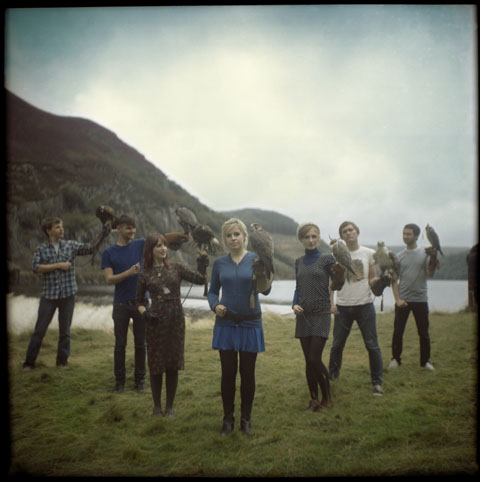 From the outside, Spillers Records doesn’t look much different than any other record store. The windows of the Cardiff, Wales establishment are checkered with album covers. Super Furry Animals. Stereophonics. Feeder. Tom Jones. Manic Street Preachers. John Cale. Funeral For a Friend. Dave Edmunds. Duffy. The Pooh Sticks. The acts don’t have to be Welsh, but they all could be. The coastal country has a rich tradition of guitar pop, and the little independent store located at 36 The Hayes has heard most of it. Yet the store has been around for more than just the duration of rock and roll’s relatively short lifespan: it’s been there for 115 years, to be exact. And during that period, the quaint shop that took its founder’s namesake in 1894 has gone on to Guinness Book of World Records status as the oldest record store on the planet. Music didn’t start in Wales, but selling it to obsessive collectors did, and generations of local college students who would rather scour the store for rare imports than waste time sitting in class, owe a great deal to Henry Spiller.

Los Campesinos lyricist Gareth Campesinos was one of those students. “I buy too many records. Besides playing soccer, it’s pretty much all I do,” said the Spillers Records regular, who — like his six bandmates — favors his group’s moniker over his real surname. “Really, I’m nothing more than a music geek. All of us in the band are. So when we get to play shows with all these other bands, I find myself still in a bit of shock that I’m standing next to them when I used to have to go out of my way to hear their music. It still amazes me that some of the people I used to look up to and envy now are my friends. And it’s even weirder to think that there might be people out there who think that way about our band,” said Campesinos in a recent interview with The Marquee.

Not far removed from his college days, the 23-year-old singer holds on to those music fanatic roots that made him and the other Campesinos fixtures at Spillers during their time at Cardiff University. Working toward politics and history degrees, Gareth Campesinos spent his afternoons studying the dates of the past, and his nights immersed in the sounds of it. Now as a member of his country’s latest tuneful indie-pop export, he finds himself on the other end of the record-buying community.

Founded in 2006, the Wales-based act has been on the fast track towards lo-fi hipster stardom status ever since. Despite its Cardiff home, none of the band members are Welsh (co-vocalist Aleksandra Campesinos is Russian and the other six Campesinos are English) — which meant the group was all too familiar with U.K. label Wichita Recordings when it came calling after Los Campesinos had played only about a half-dozen shows. The members’ extensive knowledge of all things music history meant that the gravity of the situation wasn’t lost on them when they were slated to open for fellow expansive indie-popsters Broken Social Scene less than four months after forming — and without any recorded material.

“[Getting a record contract] was incredibly easy. It’s something that all of us in the band have got a bit of guilt over,” said Campesinos. “We know the stories of bands driving around in an old minivan, having to cancel shows because they’re broken down on the side of the road, sleeping in bus stations because they have nowhere to stay. That wasn’t us. We just started the band for fun with never a thought or hope — or intention, even — of doing it for real. And the next thing we knew, we had a record deal and were getting sent out on tour. When we got signed, we didn’t even know if we were just friends who played gigs here or there or if we were a ‘real’ band like the ones you see in the stores.”

It’s the band’s understanding of those perceptions (the ones of basement critics who have one hand updating a blog and the other thumbing through a weathered copy of “High Fidelity”) that has helped shape the young but prolific Los Campesinos catalog. In that same spirit, each LC release comes tailored for collectors — with the septet paying special attention to deluxe packaging, unique content, and giving like-minded music lovers a reason to buy the albums’ hardcopies instead of just downloading individual songs.

Sticking Fingers Into Sockets, the band’s 2007 EP, is laced with debut kitsch. Last year’s full-length, Hold On Now, Youngster… was released in February, then again on Japanese import featuring versions of Black Flag and Heavenly songs. But it was the band’s second 2008 output, We Are Beautiful, We Are Doomed, on which the power of their exclusive content was fully realized. Complete with a self-produced documentary, We Are Beautiful, We Are Doomed also comes with a hand-drawn poster, a 30-page magazine, and contributions by other artists. At its fullest, it’s a record made by people with expansive music collections and intended for people with even larger ones. At it’s simplest, it’s a way for a few friends to offer up proof that some of their favorite musicians think they’re pretty cool too.

Recommended if you Like:
• Deerhunter
• Envelopes
• Super Furry Animals