Trending Stories from The Marquee
You are at:Home»Cover Story»Thievery Corporation makes an overt political statement on Radio Retaliation
By Marquee Magazine on April 1, 2009 Cover Story, Features, Interviews, Timothy Dwenger 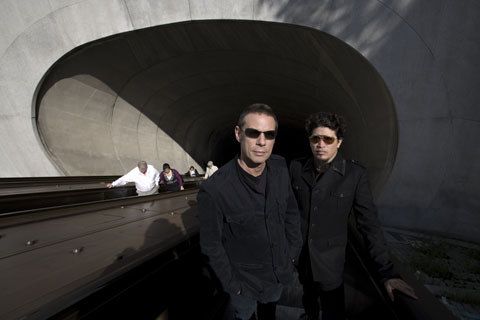 Fourteen years ago, in the then brand new, hip and trendy 18th Street Lounge in Washington D.C., a mutual friend set up a meeting between one of the lounge’s co-owners, Eric Hilton and a young producer named Rob Garza. That meeting went much better than anyone could have imagined and gave birth to one of the most innovative bands of the last 20 years, Thievery Corporation.

“We started talking about the kind of music we were into and we both had all these common influences. I think at that point I was very into Brazilian and Indian music,” said Garza in a recent interview with The Marquee as he prepared for the group’s Spring tour. “So, we decided to put our equipment together and create a studio to see if we could make any sound. The first week we got together we made two songs that were on Sounds from The Thievery Hi-Fi.” In the years since, their loungy, chilled-out take on world music has influenced a whole scene of younger artists.

Though Thievery rarely performs at the club any more, Hilton’s 18th Street Lounge is still actively supporting the thriving downtempo scene in D.C. South of the border, Garza is doing his part as co-owner of a club called La Santaera in Playa Del Carmen, Mexico. “The club is kind of lo-fi and artistic. It has great vibes and we bring in DJs from all over the world. It gets going around three in the morning and winds down around 7. It’s a crazy scene,” Garza said.

When they hit the road, Thievery Corporation aims to bring that same crazy scene to fans across the world with a huge band and dance party atmosphere. “On stage we are about 12 – 13 people; five or six singers, two percussionists, a horn section, myself and Eric, a bass player, guitar player, and a sitar player. It’s quite a few people coming and going and I think it is very different from most other shows out there,” he said.

One of the only constants throughout the night is the presence of Garza and Hilton looming over the stage behind huge stacks of equipment and though he jokes that “we are back there playing cards and checking our email,” they are the ones holding the songs together. “Seriously, we are on the decks, keyboards, samplers and the drum machine. Sometimes I’ll step out and play guitar on some of the songs, but I am usually back there with Eric,” Garza said.

In the studio things are a bit different. “When we record in the studio Eric and I are doing a lot of the playing for most of the tracks,” Garza said.  “Then we will collaborate with different musicians from here in D.C., especially when it comes to horns, percussion, sitars and things like that.”

For vocals, Thievery Corporation will frequently look outside of their local area and they have had an impressive roster of accomplished singers contribute to their albums. From David Byrne to Perry Farrell to Wayne Coyne of the Flaming Lips, countless artists have put their stamp on the duo’s songs.

On their most recent release, Radio Retaliation, the pair enlisted the help of, among others, Femi Kuti, Chuck Brown and Seu Jorge to help flesh out the songs. “Sometimes we’ll collaborate to write lyrics with the singers, sometimes they will do their own thing and sometimes we’ll write the lyrics before they come into the studio,” Garza said. “The Chuck Brown song we had pretty much written, so it was just a matter of having him learn the lyrics and record. With Seu Jorge, we didn’t have any idea for the lyrics. When he came in he told us a story about when he was homeless and living with the Hare Krishna’s so he decided to write the song about that.

Throughout it he is talking about meditation, Zen Buddhism and the Hare Krishna movement.”
Jorge’s religious spin on the lyrics for the song he was invited to participate on didn’t faze Garza and Hilton at all. In fact, voicing thoughts and ideas of that nature is exactly what the Radio Retaliation project was all about. “The airwaves seem to be so programmed by commercial interests,” Garza said. “This project was about having the ability to voice our minds. We are an independent band on our own label and we aren’t dependent on commercial outlets to get our word out there. It’s wild to have this kind of career and not really be part of the commercial system and this album is a reflection of that.”

The album also harbors a fiercely political agenda that the duo doesn’t attempt to hide at all.  Released last fall, just before the election, Garza described the album in a press release as an “overt political statement … There’s no excuse for not speaking out at this point, with the suspension of habeas corpus, outsourced torture, illegal wars of aggression, fuel, food, and economic crises. It’s hard to close your eyes and sleep while the world is burning around you. If you are an artist, this is the most essential time to speak up.”

While it is hard for Garza to sleep, he pointed out that many people in our country have been sleeping with their eyes open and don’t have the slightest clue what has been going on with their own government for nearly the last decade. “I remember when the whole thing with the Abu Ghraib story broke,” he said. “I was telling these two women who live on my floor about it about a month after it happened and they just didn’t believe that it could even happen. I showed them on the internet and they were stunned.  These people work for the World Bank and they don’t even know what’s happening. Mainstream media and celebrity culture distract people from knowing what’s happening within the politics of their own country to the point where more people outside our borders know about it than inside. The frustration we have about that lack of awareness and wanting to voice something about it really led to the feelings behind this album.”

Radio Retaliation is not the only way that Garza and Hilton are expressing their feelings and contributing to public awareness. They also helped to organize a massive anti-war protest on the National Mall in D.C. called Operation Ceasefire.  As Garza recalls, “We had all sorts of speakers, from Rev. Jesse Jackson to Joan Baez to Jello Biafra and performances from Ted Leo, Steve Earle, ourselves and others. I think there were about 100,000 people on the mall in front of the White House.”

Through it all Thievery Corporation has stayed true to their world music roots. The Brazilian, Indian and Dub music that formed the foundation of their sound 14 years ago, still resonates on the current release. Despite the importance they have placed on the political messages, the activism and the elaborate performances that surround the Thievery Corporation machine, to Garza and Hilton, what keeps things moving forward is a shared love for making their unique brand of world music.