Trending Stories from The Marquee
You are at:Home»Features»Elvis Perkins in Dearland Continuing the folk tradition of the Catskills
By Marquee Magazine on May 1, 2009 Features, Interviews, Timothy Dwenger 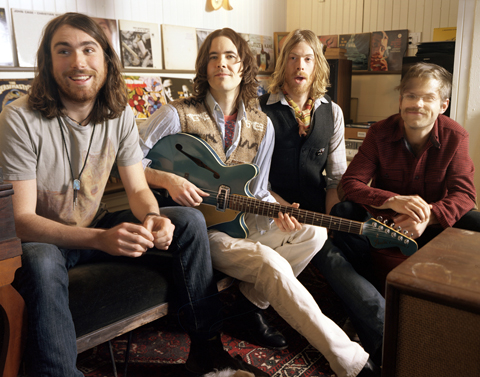 Roughly two hours north of the concrete jungle that is New York City, lies the town of Woodstock, N.Y. and the Catskill Mountain Park. While San Francisco was the hub for the psychedelic music explosion of the late ’60s and The Summer of Love, the Catskill region was home to the more American roots music of the time. Such musical luminaries as Bob Dylan, The Band, and Johnny Cash all called Woodstock home in that era.

Fast-forward 40 years and that same magic still hangs in the air like mist in the rolling hills.  Levon Helm of The Band is still throwing Midnight Rambles in his barn, dream-pop band Mercury Rev’s members are inspired by their surroundings there to create their ethereal walls of sound, and just a mere 30 miles away in the town of Germantown, Elvis Perkins In Dearland have recently emerged to contribute their own brand of rootsy folk music to the sonic stew.

In March, Perkin’s band released their eponymous debut album to critical acclaim. The record, a follow-up to Perkins solo effort Ash Wednesday, is a well-thought-out and very complete piece of work. They effortlessly weave a variety of sounds ranging from New Orleans style horn arrangements to classic country waltzes together with Perkins’ unique voice to create an album that casts some of the old-timey sounds of the region in a unique light.

Though Perkins is the band’s songwriter, and it is largely his project, in a recent interview with The Marquee he spoke at length about how he and his bandmates functioned as a unit during the recording of this project. “While the first album had a lot of players on it, it was mostly me and my producer, Ethan Gold, putting our heads together and coming up with how it was going to go down.  This one was created by a five-brained organism so it was a different experience for sure,” Perkins said. “There are five minds looking closely at a piece of music and sometimes with five people it comes together a lot quicker and sometimes it just takes longer. One is inclined to make it feel more like a democracy when you have five people who have dedicated their time and energy to making the thing fly.”

Together, they crafted a fresh and eerily upbeat album of songs that ruminate on life, death and the realities that are inherent in each. A majority of the songs on the record were written long before the band entered the studio and though they reworked some of the arrangements, many had blossomed and come to life while the band was on the road supporting Ash Wednesday.

Perkins revealed that the time in the studio enabled him to take a huge step forward as a songwriter and a musician, as he had to tackle the challenge of writing a few new songs on a deadline.  “It is an intense experience when time is of the essence…well, I guess time is always of the essence…but you are thinking that way even more when you are on the independent budget.  There were a few songs that I pulled out of my hat in order to have enough that seemed fitting or appropriate for this particular record. That was definitely a new experience for me,” he said.

Opening another window into his deliberate personality, Perkins went on to talk about how song writing is not an easy process for him. “The songs on the first record had been around and fully crystallized for months and months, if not years and years, before they were ever recorded,” he said. “Songs tend to come about slowly for me. I don’t typically sit down and bang one out; they sort of percolate and crystallize over time. I tend to like to know that a thing is sound and seaworthy before I push it off.”

Throughout this album, Perkins demonstrates an iron-fisted grasp on the English language and the art of songwriting. While a listener would be hard pressed to pick out the songs that Perkins didn’t consider quite “seaworthy,” he admitted in a recent interview with NPR’s Steve Inskeep that “some of them … sort of stare back at me a little funny.”

A fascinating element of the beauty of Elvis Perkins In Dearland is that while the songs have great potential to evolve in the folk tradition, they have an intimate and timeless quality about them that is reminiscent of the Americana that has richly saturated the band’s home region for decades.  Simply put, this band is creating classic music that could have as easily been released in 1967 as 2009.

Recommended if you Like:
• The Decemberists
• Devotchka
• Bonnie “Prince” Billy