Trending Stories from The Marquee
You are at:Home»Album Reviews»Neil Young
By Marquee Magazine on May 1, 2009 Album Reviews, Jonathan Keller 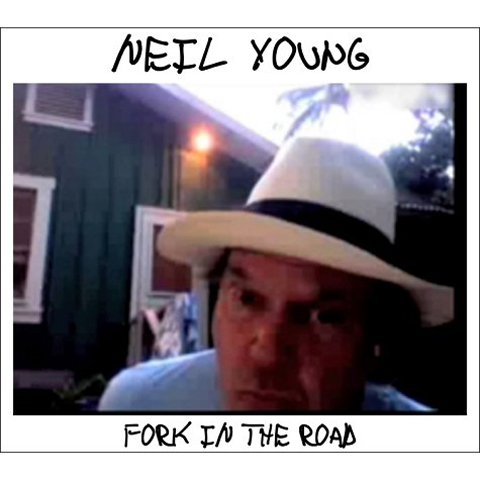 Neil Young
Fork In The Road

Neil Young is a legend among legends. He was a member of Buffalo Springfield and Crosby, Still, Nash & Young and has outdone his successes in those groups with his own solo career.

Never one to stick to a certain genre of music, he has explored folk, rock, country, electronic, blues, rockabilly, and doo-wop. Often called “the godfather of grunge,” Young’s influence has transcended generations and his influence on Eddie Vedder and Kurt Cobain alone, helped pave the way for the revival of guitar-driven rock and roll in the early 1990s.  Kurt Cobain even referenced Young in his suicide letter when he used the line, “It’s better to burn out, than to fade away,” from Young’s song “My My, Hey, Hey (Out Of The Blue).”
Putting his legacy aside, the one thing Young has managed to do that so many other artists fail to do is continually put out good music, even late into his career. His latest release, Fork In The Road, is not one of his best efforts and is not going to win him any new fans, but it should please some of his hardcore fan-base.

The songwriting for Fork In The Road began with a few songs inspired by Young’s Lincoln Continental, which had been retooled to run entirely on alternative fuel — that car was also the cover photo and inspiration for his 2007 release, Chrome Dreams II. Fork In the Road became an ode to Young’s adoration of the automobile. With song titles such as “Fuel Line,” “Get Behind The Wheel,” “Off The Road,” “On The Road,” and the title track “Fork In The Road,” it is clear to see that his political outpouring on some of his previous albums has taken a back seat.

Fork In The Road is a raw album and sounds live-tracked, similar in sound to his 1975 album Tonight’s The Night. Even though Fork In The Road is primarily an electric guitar album it lacks the sheer distorted power found on such Young albums as Broken Arrow or Ragged Glory. It is also safe to the say the songwriting doesn’t live up to those albums either. For the most part the album sounds lazy, as Young and band plow through a selection of songs that are at shuffle speed.

One highlight of the album is the album’s only acoustic song “Light A Candle,” which could have easily appeared on his acoustic releases Harvest Moon and Silver & Gold.
Young’s fans are still waiting for that next gem of an album to appear and with his track record his next one might be it. Fork In The Road is just going to make them wait a little longer.